I just saw these before and afters on the Facebook page, "I'm Fed Up With Ugly Churches" (My comments following the photos): 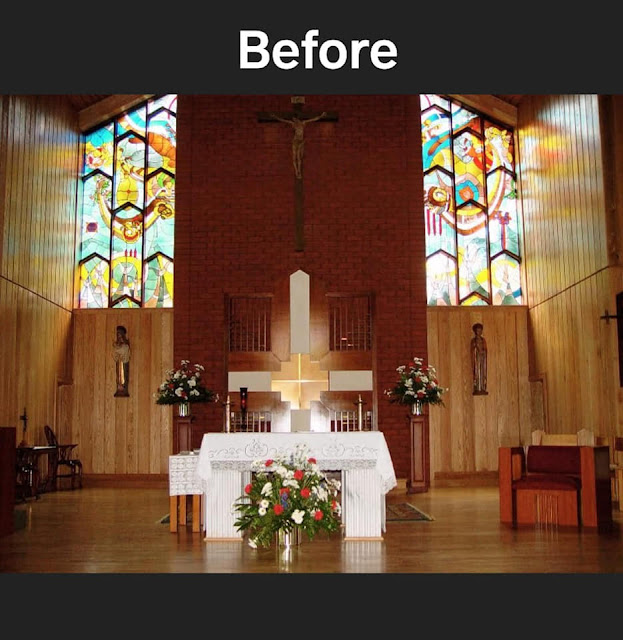 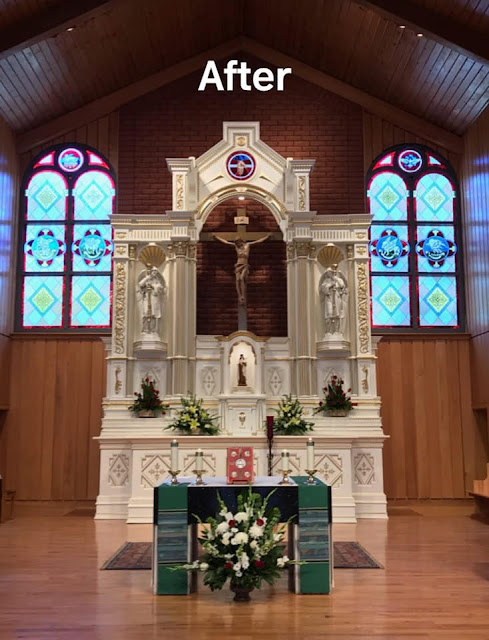 Oddly enough, I was a big part of the first renovation that began with a process dating to about 1979. I arrived as a newly ordained assistant pastor in 1980 and work began in 1981 with a change of pastors as the work began with the pastor who initiated this leaving a full two months before the pastor who inherited this came. It is Saint Teresa of Avila in Albany, Ga. Rambusch and Company was selected by the then pastor to guide the committee in making decisions. The stained glass windows above the altar while confusing, were designed and executed by Father Methodius of the Monastery of the Holy Spirit in Conyers, GA. These were made of exquisite glass and brilliant colors and had symbolic meaning. But these were not well received but certainly a vast improvement over what had been there which were fiberglass windows with circular wood chips embedded in it with a gold color. I hope the colorful windows were preserved in another forum on church property. They were quite expensive, a controversial work of art, but art nonetheless and a donated gift.

My greatest save, though, is the crucifix which was original to the church which was completed in 1958. Rambusch wanted it removed and a resurrection image of Christ to replace it. I convinced the committee to reject that!

While the old altar from a convent is quite beautiful, I think the original screen designed by rambusch and costing about $20,000 (1980 dolloars to include the tabernacle) complimented the architecture of the church.

Prior to this renovation, the tabernacle had been placed on a side altar and the priest's chair was directly behind the altar. I thought the screen with the sliding golden doors was a marvelous solution to hiding the tabernacle during Mass but exposing it otherwise given the ethos of the 1980's to rid the tabernacle altogether from the nave of the Church or have it shunted to the side.

Although not ideal, it is far better than the look of the before!

I am not a fan of the original style but it can be made Catholic consistent with its architecture. The second looks mismatched, a clash of styles, as Fr Kavanaugh wrote.

rcg - Is there a "Catholic style" of architecture or interior decoration?

Yes, the Benedictine arrangement says Catholic. The other arrangements are “catholic light. “ please no more, de gustibus, etc, we’ve heard it all before. It’s not a compelling argument

After staring at this for awhile, I agree with the others, it's a bit of a clash. For its era, I did not think the before was bad btw. With all the churches that have closed, it is a shame they either could not have located, or, decided against repurposing fixtures more appropriate to the style of this building.

I don’t have the pre Vatican II look which was traditional and nice with altar railing. After V2 they only pulled the altar away from the wall and put a horrible throne like chair behind it and of course the tabernacle moved to Mary’s side altar.

The problem with the before is that it is very horizontal. Even though the new high altar clashes it does have the vertical look which is more appealing. I wonder if more work is intended to make the sanctuary a bit more harmonious. Although as we know you can have a Gothic style church with a baroque altar.

Style is probably incorrect. But statues of the Saints, the Blessed Mother and the altar arrangements show a Catholic worship space unique from Protestant architecture. There are even proportions not currently observed but present in older churches.