FROM USA TODAY!!! SURELY THE SECOND COMING OF CHRIST IS NEAR! 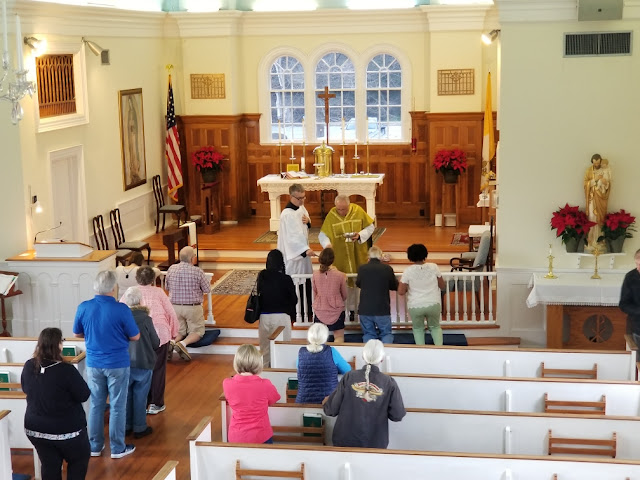 'I dare you to deny me Communion.' What has happened to Catholicism in America?

Prominent Democrats push the idea that Catholicism in modernity requires adaptation, rather than the courage to stand apart from the political moment.

Ever since American Catholic bishops announced their decision to release a teaching document on the reception of Holy Communion, news and social media sites have teemed with outrage.

The backlash is a product of the belief that church teachings must adapt to avoid being controversial in modern times.

The plethora of misinformed reactions is troubling, hinting at the larger issue of uninformed Catholics. When 69% of American Catholics don’t believe in the presence of Jesus in the Eucharist, and 59% support abortion, it is unsurprising they are angered by centuries old church teachings on proper reception of the Son of God.

Rep. Ted Lieu, D-Calif., made headlines with his tweet, “Instead of denying God to Catholic human beings who disagree with your political views, you should be inviting everyone to God’s table. God’s love is not a quid pro quo transaction. Remember Agape? It’s no wonder Catholic membership has been rapidly declining.”

currently there is a statue of the pachama on an altar in the city of Guadalajara Mexico and so it begins. Lo and behold the traditional Latin mass is evil pachama good! Continue to pray for Pope Francis conversion.

What you model is likely closer to what was contemplated. At the same time, however, you are so greatly outnumbered by those who do not have the obligation, interest, or understanding of continuity/organic development to do the same. I seriously doubt that cathedral in Saskatoon (the one with all the streamers and the off-center cross) are even remotely concerned about modeling the same.

The first priest in the video is the very one who recently resigned as a result of his behaviour. Listen to what Cardinal Gregory states in the video, keeping in mind the latest motu proprio.

100% correct Pierre, and Rome as well. I hope all he understand that 70% of Novus Ordo Catholics don't believe in the Real Presence however 90% of TLM Catholics do believe. Yet, still after more than 50 years after Vatican II we have people still trying to figure out why Mass attendance is at 10% it was 75% prior to the council, closed Catholic churches, convents, seminaries, hospitals, schools, sex abuse, banal Masses,how many more years are you going to take to figure out what happened?

His behavior was truly scandalous. I feel for his family and friends who surely must be suffering at this news. Of course, going after the Latin EF is a priority of "Pope Mercy" not going after clerical miscreants. Lots of mercy for them.