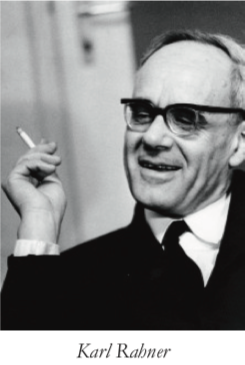 When I read Fr. Rahner in the 1970’s seminary, I could hardly stay awake and his run on sentences reminded me of me. What the heck was he writing?

But then I read this a WDTPRS yesterday and it made perfect sense to me:

Imagine that the Pope, as supreme pastor of the Church, issued a decree today requiring all the uniate churches of the Near East to give up their Oriental liturgy and adopt the Latin rite….The Pope would not exceed the competence of his jurisdictional primacy by such a decree, but the decree would be legally valid.

But we can also pose an entirely different question. Would it be morally licit for the Pope to issue such a decree? Any reasonable man and any true Christian would have to answer “no.” Any confessor of the Pope would have to tell him that in the concrete situation of the Church today such a decree, despite its legal validity, would be subjectively and objectively an extremely grave moral offense against charity, against the unity of the Church rightly understood (which does not demand uniformity), against possible reunion of the Orthodox with the Roman Catholic Church, etc., a mortal sin from which the Pope could be absolved only if he revoked the decree.

From this example one can readily gather the heart of the matter. It can, of course, be worked out more fundamentally and abstractly in a theological demonstration:

2. To point out and protest against the possible infringement against moral norms of an act which must respect these norms is not to deny or question the legal competence of the man possessing the jurisdiction.

The New Springtime Renewal New Evangelization Church of the New Advent God of Surprises Freed From the Strictures of the Past Kumbaya Postconciliar Church has one staggering fact that it cannot explain away or even stop: MASSIVE DECLINE AND DEPARTURE.

Except for one group: Traditionalists.

We actually, SUPPORT our priests. We BELIEVE the Church's teachings and we OBEY them. We PRAY for our bishops and popes, even when we disagree with them. We make sure that our children attend Mass and try to educate them in the sacraments. We pray with our families. We don't just show up at Mass occasionally, drop a dollar in the collection and expect the priest to do everything. And we're growing. We started out small, so our growth might not yet look significant, but we're growing and we're about the only sector of the Church that is.

So the current pope certainly can and probably will exercise his juridical authority to either quash or restrict us. But to what end? Why would any reasonable, rational leader take his most supportive and vibrant followers and kick them in the teeth?

History shows us that you can control people. You can force them to obey. But you cannot force people to think the way you want them to. The fall of the Iron Curtain proved it. The presence of Confederate statues throughout the South proves it. The coming fall of the CCP will prove it.

"I don't care what they think." Really? That kind of rationale might apply when a governor signs anti-racketeering legislation that will jail criminals. But can ANY pope afford to do this to his most organic, successful followers? Every parish mission statement CLAIMS that the community is "vibrant". Traditionalists actually ARE.

I won't lie and say Traditionalists are crazy about Francis. But as an act of the will, we love him and pray for him. When we criticize, we criticize decisions, not the person. Taking that kind of loyalty for granted could be a huge mistake for this pope. Shutting down your only successful sector is suicide. If the last five popes were CEO's of a publicly held company, that company would be out of business and they would have been dismissed along with the boards of directors decades ago. The only reason this company still runs is because God founded it and a remnant survives.

For example, the extent he was influenced by Kant and Heidegger.
His unorthodox views on the Eucharist and Mariology and the ecumenical movement.
His problems with transubstantiation; Rahner preferred “transfinalisation” (sp?) - which was later rejected by Paul VI.
….and so on.

To say nothing of Rahner being “under a cloud” for his theological “insights” right on the eve of THE Council in early 1962.
Yet still being chosen to be a key theological expert and adviser at Vat2; in fact, he was a massively influential theological adviser at Vatican II (1962-1965).

Did Fr Z’s opinions recently stated last week on his WDTPRS blog about Benedict still being pope, also make perfect sense to you - pray tell us? Because that’s who you’re aligning yourself with here with these nonsense arguments!