IN THE LAST DAYS OF HIS PAPACY, WHY WOULD POPE FRANCIS IN SUCH A SWEEPING AND MEAN-SPIRITED WAY BETRAY FAITHFUL CLERGY AND LAITY WITH HIS UNREASONABLE AND IDEOLOGICAL MOTU PROPRIO? 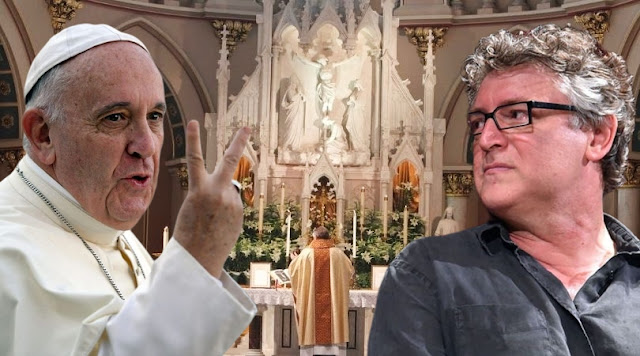 When Pope Benedict issued Summorum Pontificum on 7/7/07, I welcomed it and awaited Bishop Kevin Boland’s direction on how to proceed with the liberal allowance of the UA.

When it came, I followed his guidelines scrupulously. I surveyed St. Joseph Church parishioners in Macon to see how many would be interested in its celebration. I had 300 positive responses out of a parish of 1,200 families at the time. Then I had an educational night where I tried to explain the differences in the UA and the UR, not only in the order of things but what was eliminated and why.

I tried to explain that in the late 50’s there was a move in most dioceses including Savannah to enable people to verbally participate in the Low Mass and I showed them my St. Joseph Missal which I still have that helped to facilitate that. But I spoke of a different kind of spirituality between the two forms and that the UA Mass is more contemplative than the UR Mass, more like Adoration of the Blessed Sacrament.

We weren’t allowed to celebrate the UA Mass until 9/14/07, the Feast of the Triumph of the Cross. It was a Friday night. In Macon, the weather was horrible and there were Tornado watches and warnings all day long and a terrible thunderstorm at the 7pm time for the Mass.

There were over 400 people there!

Not all of these people would come to our monthly 2 pm UA Mass or our weekly Tuesday 5 pm UA Low Mass, but they were not opposed to it and there was no division in our parish. I used the UA Mass for special Holy Days, like our patronal feast of St. Joseph or Immaculate Conception. We would have more in attendance with these special Masses and our annual All Souls Day Requiem Mass was always well attended.

Finally in my last year at St. Joseph, after we had restored the old altar railing to its new position, I made our 12:10 PM UR Mass ad orientem only for the Liturgy of the Eucharist and used the altar railing for the distribution of Holy Communion where the communicants could either kneel or stand to receive on the tongue or on the palm of their hand.  We had five weekend Mass, one Saturday evening, three Sunday morning and one Sunday evening. Thus I only did this at the 12:10 PM Mass.

In addition to that the UA Mass was celebrated once a month at this 12:10 PM Mass, the First Sunday of the month. We made sure there were English translations of the changing parts of the Mass. I think most in attendance thought there were no real differences other than the Latin.

This was not divisive.

In our diocese, we had the UA Mass in Savannah since Pope John Paul’s permission in the late 80’s. Our Cathedral has had it for almost 20 years each Sunday.

As far as our diocese is concerned, Pope Francis is dead wrong. That’s sad for him and papal authority and a Church in free fall in Europe and most parts of the world and not because of the UA Mass.

While I feel betrayed as well as those who regularly attend this Mass at our Cathedral do, I have always seen this Mass as a gift from God through the Church and a special permission to celebrate it. But I love the new Mass too, although I had hoped and worked for its improvement in the dignity of its celebration and a recovery of the reverence it lost which the older Mass has.

That Pope Francis did not issue a paragraph or two on the recovery of the sacred ethos of the UA Mass in the UR Mass is a tragedy. But maybe he is writing a Motu Proprio on that and asking UR Catholics not to be divisive in promoting heterodox teachings like women’s ordination as well as gender fluid candidates, married, not married or whatever and other gender ideologies as it concerns the Mass and other sacraments. I am waiting.

Fr McD:
You will wait forever. The pope only mentioned abuses in the Novus Ordo because he thinks the only reason why any faithful would go to the TLM is because of these abuses. In his mind, who would not otherwise want go to the wondrous Novus Ordo since it is has been divinely revealed through the Council as appropriate for the modern age? The liturgical movement itself was divinely inspired to bring about these radical changes to the liturgy which no Catholic could refuse because of its attraction for the hearts and souls of the modern age, and which will eventually bring all the hearts and souls of future generations on this planet to the Church. The Novus Ordo is part of a new Pentecost, the birth of a new Church for the modern age that will capture the whole world.

This neo-modernist thinking clearly does not allow for any pre-Vatican II liturgical ethos, and explains the arrogant and uncompromising, if not cruel, hostility to the TLM, a symbol of this ethos, as displayed by the blog you sometimes refer to, and now clearly by the pope. Sacrosanctum Concilium for these is a new addition to the canon of divinely revealed Sacred Scripture.


Although I would normally not read Church Militant there is an article there containing an interview with a French atheist who performs a major takedown of PF’s “thinking.” It is comedy gold

There is a question that needs to be asked-
Did George Soros pay Francis 30 pieces of silver to write TRADITIONIS CUSTODES?

The dissidents in Germany and within the Jesuit order won't obey the Pope, so any moto proprio directed at them would be wasted effort. The German church already ignored one or two Vatican directives. One more isn't going to stop the Synodal Path and blessings of gay unions. The people that attend the TLM and especially the priests who offer it are more inclined to obey.

So if you're going to boss someone around, where would you direct your energy? Especially if your motive is not to actually accomplish anything, but just exercise your authority?

Father Z links a moving testimony about the Traditional Latin Mass at, of all places, the Tablet: https://www.thetablet.co.uk/blogs/1/1830/in-defence-of-the-traditional-latin-mass.

This individual is the sort of person Mark Thomas, calls "sick" because they love tradition. The very same people I know. Still waiting for his apology for calumniating all of them.

At this point, we are beating a dead horse. Anyone with minimal critical thinking capacity can figure out that this pope has no interest in cleaning up liturgical abuses or any kind of HONEST fidelity to Vatican II. Anyone willing to connect the dots can probably figure out what his motives are, but that's for each individual to discern.

My point is, we have spent the last week or more examining this to death. Certainly understandable and I am as guilty of anyone for doing so myself. But it's time to move on. What can our bishops do canonically. What can WE do as lay people to "resist" this nonsensical order without separating ourselves from the Church?

Playtime is over. The time for whining is over. It's time for us to take decisive action, but to also do so prudently and prayerfully.

This letter from the Pope clearly shows what he is really all about. The letter is nasty, overblown attempt to require the entire Latin Rite to obey his personal preferences.

I have never been to a Novus Ordo Mass that has been celebrated according to the Roman Missal, not once. Every Mass has something that is added, removed or changed. It seems to me that the majority of priests who celebrate the Mass of Paul VI either don’t believe in it or they don’t trust it. They all think they can improve it some way. What’s happening to those priests. Why shouldn’t they have to prove that they agree with Vatican II. If they do believe Vatican II is a valid Council then they should be forced to celebrate the Mass according to the approved books with no personal adaptions. Will that be done? No of course not.

Yet Traditional priests may likely be forced to concelebrate the Novus Ordo in order to prove that they believe in Vatican II.

Germany…?.?.? What is Francis doing about Germany? Nothing. He surrounds himself with cardinals that are accused of immorality and thievery and nothing happens. Card. Coco Palmieri, hat about Cardinal “nightly night baby” who lived with an Italian gay actor until it was discovered. Nothing happens.

This letter shows that Francis is hateful and spiteful. He will bring the hammer down on Catholics that believe in the Faith but to those who openly betray the Faith he does nothing. The man is a scandal.

Cardinal Cupich of Chicago, shockingly, is maintaining the status quo. A big surprise because he is usually a Francis supporter.

Father Fox, you will never receive an apology. It would require him to think!

Fr. McDonald, regarding your desire in the concluding paragraph: I fear that you will be waiting until the proverbial "Hell freezes over."