My family moved to Atlanta in 1956 and Augusta in 1960. My mother did not drive and thus we lived on a city bus line and rode the bus frequently until about 1967. I would say taking the bus downtown happened several days a week. How Pope Francis has stereotyped and categorized traditional Catholics who are attached to the Latin Mass reminds me of what the south thought of and did to blacks. I could easily have been on that bus pictured below: 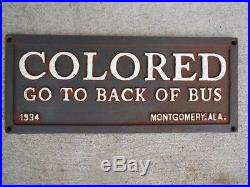 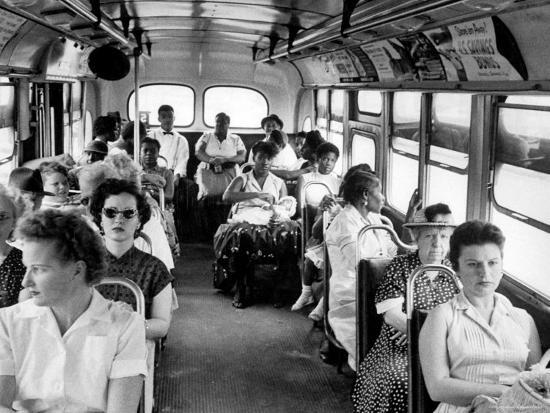 What strikes me most about today’s Motu Proprio is that it seems so unnecessarily mean-spirited not only to those attached to this Mass and let me clear it is the Mass and accomplishes exactly what the OF Mass accomplishes, but also how insulting this is to Pope Emeritus Benedict XVI, shockingly so.

Those who are faithful Catholics and not rabble rousers and simply prefer the Tridentine Mass are being treated as second class citizens, almost like blacks were treated in the south prior to desegregation. It was a disgrace the enforced sitting at the back of the bus, drinking from separate water fountains and eating at segregated restaurant counters. I remember those days quite well and there is a parallel to what has occurred today.

Fortunately bishops are coming forward with some compassion and that is deeply appreciated. I copy this round-up of bishops’ reactions from Fr. Z’s blog:

Archbishop Salvatore Cordiloeone of San Francisco told CNA July 16 that “The Mass is a miracle in any form: Christ comes to us in the flesh under the appearance of Bread and Wine. Unity under Christ is what matters. Therefore the Traditional Latin Mass will continue to be available here in the Archdiocese of San Francisco and provided in response to the legitimate needs and desires of the faithful.”

The Diocese of Arlington told CNA that all parishes that had planned on offering Masses in the Extraordinary Form would be able to do so.

I hope that that “planned” means that lots more were going to start it up!

And this from New Orleans: Looks like the SSPX were right to resist becoming regularised with the my-way-or-no-way Vatican neo-modernists in power who would have eventually destroyed them. Neo-modernists tend to be very callous towards their opponents. What bothers me is the pope's hypocrisy of being welcoming, merciful, and charitable, except to faithful traditional Catholics.

I have known from the beginning that he was incompetent for the position. Will the next pope restore the previous motu proprio? This seesaw antic from the Vatican shows incompetence. And moreover there are so many inconsistencies in the letter that it is embarrassing to read. Interesting, though, that he has not withdrawn the faculties he granted to the SSPX for confessions and marriages....yet.

Whatever pretext the pope has given for doing this, the main reason is pretty simple. Whereas Novus Ordo churches in the West are falling into oblivion, it is the Traditional Latin Mass churches that are growing especially with young people so he wants to stop it because he takes it as an attack against Vatican II. Of course he does not seem intellectually capable of understanding that the Novus Ordo Mass may not be what the Council had envisioned in the first place.

Also looks like the rumours I have heard about Francis being a mean vindictive old man in private may be true. He has already left the suffering faithful Catholics in China to the lions. And what an insult to pope Benedict-he could not even wait for him to die. A formal schism is brewing with this incompetent pope who as a Latino elitist can only think in terms of politics and political strategy, and who as a Marxist dilettante hates America for its large base of anti-socialist Catholics.

When I lived in San Diego, Salvatore Cordileone was a parish priest, then later our Auxiliary Bishop. He was a good priest, resolute, soft spoken, but strong in a quiet manner and orthodox. Many of us were saddened when he went to Oakland, as we wanted him to be our next bishop, but God had bigger plans. I couldn't think of a more qualified man to handle an archdiocese as difficult as San Francisco. He has brought that same quiet resoluteness there and his generosity reflects what a broad-minded, calm spirit he is. Even better is the example he sets, as he regularly offers the TLM himself.

I've only attended one EF Mass since the first Covid lockdown in March 2020 closed the churches for over three months, and banned singing when they reopened. In the normal course of events I would mix quite a lot in trad circles and am personally acquainted with some of its leading lights. I don't recognize PF's (and MT's) grotesque caricatures.

The hostility of bishops towards the Old Mass has waned over the years, and a number of them have celebrated it themselves. I don't think any of them would want to suppress it in his diocese, and the English and Welsh bishops would prefer to act consistently. I don't believe there will be much change to the status quo. The main concern of their lordships will be getting people back to Mass post-Covid (at present the obligation is suspended) and it is not in their interest to alienate a small but significant portion of worshippers.

The most positive spin on Traditionis Custodes has just appeared on the website of the Oxford Oratory. It is described as 'a new set of guidelines' for the provision of Mass according to the 1962 missal. 'These guidelines encourage the diocesan bishop to take greater responsibility in overseeing this provision in his diocese. His Grace Archbishop Bernard [Longley, of Birmingham] has asked that we continue to provide access to both forms of the Mass. There will be no changes to our Mass regular schedule.'

Keep calm and carry on.

I love the British spirit!

I do not recognize John Nolan's grotesque caricature of the Vicar of Christ, Pope Francis.

But it may be that John Nolan is correct in that there will not be much change to the status quo in regard to the TLM.

His Holiness was compelled to react to the negative feedback from bishops that he had received in regard to the TLM. Any sentient Catholic adult familiar with the "Traditional" Catholic Movement is aware of the overall awful situation within said movement.

Pope Francis, charged with teaching, governing, and sanctifying us, responded, in line with feedback from bishops, to said situation.

Pope Francis, in positive fashion, has called upon our bishops to take greater responsibility in overseeing the TLM.

liberal clergy suddenly facing full pews, for a change, of veiling, praying the Rosary, and kneeling to receive on the tongue punished Traditionalists. It would make one go ad orientem lol

I assume that Mark Thomas is a sentient Catholic adult, and he should be aware that there is no "Traditional" Catholic Movement as such. There are priestly societies which are canonically erected and use the older books exclusively, predominantly lay societies which for decades have supported the Tridentine Mass, traditionalist parishes (in England the Oratorians are famous for their liturgy and music and use both forms of the Roman Rite), not to mention priests, bishops, cardinals and theologians who can be counted in the traditionalist camp. It's a very broad church, but does not constitute a 'movement'. Even the SSPX seems quite comfortable with its irregular status (with 680 priests and 217 seminarians why shouldn't it be?) and Rome seems to accept the situation.

Has Mark Thomas any evidence of a 'negative' feedback from bishops, and can he name any examples? Can he prove that the 'movement' he identifies and excoriates has any existence outside his febrile fantasies?