THANK YOU FOR YOUR COMMONSENSE CARDINAL ZEN! 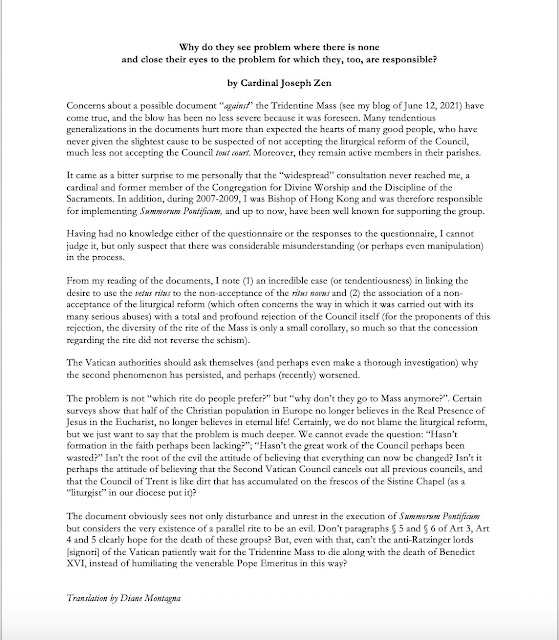 The Cardinal is asking the obvious questions and pointing out the absence of meaningful consultation. Typical progressive manipulation and bullying.

H.E. asks very fair questions that, combined, are a very reasonable-counter argument against those who maintain that many/most/all Traditionalists are effectively schismatics. As the papal castor oil continues to be dealt out, it is highly likely that the Cardinal's concerns will be addressed, let alone acknowledged.

Just like the Dubia raised by the 4 cardinals were never addressed. When you have a weak or untenable position, you ignore those raising concerns

Our Lady of Akita did say "cardinals opposing cardinals, bishops against bishops, is this what Francis wanted simply because he loathes the Traditional Latin Mass which was codified by The Council of Trent, I guess that council does not count.

Until recently when I moved back to the USA, I sang in the chant schola at the one official Tridentine mass in Hong Kong on Sundays, racing across town after singing in the choir for the English ordinary form mass at the Cathedral (I know we can't really say "ordinary form" any more, but "novus ordo" has a pejorative sound to it in my ear). Most of the other schola members also sang at ordinary form parishes Sunday mornings, and I never heard a word of rejection of Vatican II or the OF mass's legitimacy from the Tridentine massgoers the whole time I was there. I am grateful for the opportunity to learn the traditional Gregorian chant repertoire of the Church. In theory one could also hear chant at an OF mass, but it's practically nonexistent in real life.
Cardinal Zen visited the group on occasion. A sweeter old man one cannot possibly imagine. I don't know what my Hong Kong friends will do now. The mass was held in a parish church but not sponsored by the parish. Pope Benedict's noble, eirenic experiment of coexistence with Summorum Pontificum was nice while it lasted. I think a longer period would have been necessary for mutual enrichment to have occurred. I can hope that life might be breathed back into reform of the reform efforts for the OF, but I am not holding my breath. I do hope a future Pope will follow Father MacDonald's advice and add a supplement to the OF missal along the lines of the Ordinariate missal's to allow some traditional elements back as options.