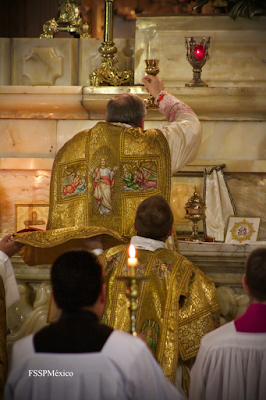 Many faithful – laity, ordained and consecrated – have expressed to me the profound distress which the Motu Proprio «Traditionis Custodes» has brought them. Those who are attached to the Usus Antiquior (More Ancient Usage) [UA], what Pope Benedict XVI called the Extraordinary Form, of the Roman Rite are deeply disheartened by the severity of the discipline which the Motu Proprio imposes and offended by the language it employs to describe them, their attitudes and their conduct. As a member of the faithful, who also has an intense bond with the UA, I fully share in their sentiments of profound sorrow.As a Bishop of the Church and as a Cardinal, in communion with the Roman Pontiff and with a particular responsibility to assist him in his pastoral care and governance of the universal Church, I offer the following observations:1.  In a preliminary way, it must be asked why the Latin or official text of the Motu Proprio has not yet been published. As far as I know, the Holy See promulgated the text in Italian and English versions, and, afterwards, in German and Spanish translations. Since the English version is called a translation, it must be assumed that the original text is in Italian. If such be the case, there are translations of significant texts in the English version which are not coherent with the Italian version. In Article 1, the important Italian adjective, “unica”, is translated into English as “unique”, instead of “only.” In Article 4, the important Italian verb, “devono”, is translated into English as “should”, instead of “must.”
Read more »
Posted by Fr. Allan J. McDonald at Friday, July 23, 2021

Cardinal Burke also wants to see the results of the "survey" of bishops so as to see how scientifically conducted it was.

Of course, that is wishful thinking since the survey and the accusation of widespread Vatican II deniers in the TLM communities is just a pretext to eliminate the TLM altogether.

I will say it again: for many neo-modernists, the existence of a valid non-reformed Latin rite is seen as an attack against Vatican II which called for a "reform" (actually "renewal," but I will not get into this Orwellian discussion here) of the TLM liturgy. And there are now many, many, neo-modernists in the Church, considering V2 was mis-used to open wide the door to them. One has only to consider how elated the bishops of Fr Anscar Chupungco's home country (Philippines) are right now with what Pope Francis just did to suppress the TLM. Fr.Chupungco was avidly anti-TLM, because like for many neo-modernists who reject non-verbal language, the TLM cannot promote "active participation" of the faithful which is the foundation of the entire liturgical movement, and even mandated in Sacrosanctum Concilium. His writings were very influential, and continue to be so.

His Eminence nails it. HFPF is an authoritarian who cannot abide when his authority is challenged. He doesn't handle it well as evidenced by his time as the head of his Jesuit Province in Argentina and subsequent "correction/exile" (my personal interpretation). HFPF reminds me of a boss who thinks he has all the answers, knows exactly what he wants, is going to move forward no matter what others may say, but floats a bogus "survey" or claims he has support from a large cross section of the company to make a change. The employees know he is a fake and as such, he lacks authenticity (they see through the smoke). As he moves forward he loses even more credibility from an already dubious workforce. Apply this analogy here.

In all seriousness here, HFPF needs our prayers!

"[T]he fact of the matter is that the Priestly Society of St. Pius X is in schism since the late Abp. Marcel Lefebvre ordained four bishops without the mandate of the Roman Pontiff.

"And so it is not legitimate to attend Mass or to receive the sacraments in a church that's under the direction of the Priestly Society of St. Pius X."

Would Cardinal Burke accept that his "harsh" declaration has brought "profound distress" to the Faithful in question?

Pope Francis has declared that, at least in regard to the Sacraments of Penance, and Holy Matrimony, the Faithful are free to turn to the SSPX for said Sacraments.

Does Pope Francis' teaching in question trump that which Cardinal Burke declared in regard to the SSPX?

Or, in regard to his declaration related to the SSPX, does Cardinal Burke trump Pope Francis?

Now, if Cardinal Burke is wrong, then what else has he botched?

Should we obey Pope Francis' Magisterium?

Or, should we side with Cardinal Burke?

There are too many neo-troglodytes and neo-neanderthals out there making Orwellian references in Orwellian proportions with their avidly anti-Vatican Two stance and avidly anti-Vatican Two reasoning in a vain attempt to return not just to some usus antiquior - but not too "antiquior," mind you lest we end with with mass celebrated in Greek! - but to a world that has disappeared and will never, can never, be brought back.

Cardinal Burke is a scholar and first rate canon lawyer, so you would never listen to him. This motu proprio is deeply flawed

Pierre 3:29 - actually the only one who thinks Cardinal Burke is a first rate scholar and canon lawyer, is Burke himself. The majority of other highly qualified and esteemed scholars, theologians and canon lawyers think he’s extremely mediocre to say the least. It’s also worth noting that every position Burke has held has resulted in him needing to be moved sideways where he can no longer do so much harm.