THE TROUBLE WITH PROGRESSIVE CATHOLIC THEOLOGY

A Praytell commentary on social justice and myopic clergy and laity  who only focus on abortion and using the Eucharist as a weapon against those who promote it:

While many Catholic Christians mind their own business, the injustices suffered by migrant workers, the gross discriminations against black men and women (even at times within the walls of Catholic churches), economic oppressions of all sorts…violent vigilante antics based on the 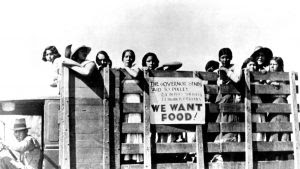 principle that might is right, etc., go on, with hardly a prominent Catholic voice raised in protest.

My comments and reflection on Katherine Harmon’s social justice meme:

Don’t get me wrong. The Catholic Church and her Faith and Morals calls for perfection, which of course, Holy Mother Church realizes will not take place in this life for individual Catholics and the communal Body of Christ. That will take place in heaven which is “already but not yet.” Nonetheless we are to work for this perfection for individuals and societies.

Praytell has an article on social justice and the Church. The author bemoans that so many Catholics fall short by afflicting pain and suffering on so many who are sinned against. Of course she refers to racism and injustices against migrants, a minimum wage that is too low. She laments that Catholics complain when the Church (?) calls for political changes to accompany her social teachings. I might add she says not a word about pro-choice Catholics be they politicians or regular voters.

Of course comes the meme that the Eucharist isn’t a weapon. It isn’t. It isn’t a talisman either.

The Eucharist is not an “it.” It is a Person, the Divine Second Person of the Most Blessed Trinity Who in time and place was incarnate by the power of the Holy Spirit through the Blessed Virgin Mary and became Man. I intentionally use the word Man as in Son of Man and gender. It is not I though who alone uses the term Man or Son of Man, but the Church collectively through Scripture and Tradition.

The sad thing about the Praytell article which if it was included could have been half way decent is that there is no mention of Original Sin as it pertains to injustices of the world (world used in the Biblical sense). There is not a mention of venial or mortal sins of people. Institutions can’t sin although sinful members of institutions can codify sin as do politicians and others when it comes to abortion, euthanasia and setting a too low minimum wage or when Jim Crow type laws are enacted.

And finally there is not a word about the four last  things: death, judgment, heaven and hell.

In other words, for the author of the Praytell article, the Church should act as a perfect political institution for this life only. There is no hint of what is to come and how the Holy Sacrifice of the Mass which brings about the Most Holy Eucharist points to Christ and the perfection of the Church Triumphant.

There is no mention of the fires of hell for those who harm others from abortion, do not paying a just wage to workers, and who die unrepentant and without atonement or penance for their sins and restitution for any crimes and sins they have committed.

And you know what? There is no language used by the author about accompanying those who harm migrants, don’t pay a living wage to their employees and exploit people for their own gain. There is no mention of sin or sinners and that the Church is a hospital for them. And when the Medicine of the Eucharist is having no effect on changing them and they become public sinners enjoying leading others to hell as well, no mention of withdrawing the Medicine that is the Most Holy Eucharist as a sign that the sinner has withdrawn from the Church and her mission—its called excommunication. Or lesser sanctions like censure.

My former bishop shut down two small parishes in our diocese because of their intransigence and congregationalism. No one could have the Eucharist in those parishes. He even changed the locks on the doors! After a period of time though and a change in behavior, the churches were reopen.

That’s the trouble with progressive Catholic theology. It isn’t Catholic. It is merely temporal and political.

Parish to diocese to nation, there is a hierarchy of giving, where those with more give generously of excess beyond own simple needs, and those with less give less past own simple needs, so that no Catholic in parish or diocese lacks for neccessities, and then same hierarchy applies to charity outside the Church, where once own members simple needs met in parish and diocese, then excess applied to society at large to meet their basic needs.

The vast majority of "social justice" today has this completely inverted where wealthiest to poorest within the Church give as little as possible and it nearly all goes to a million different causes outside the Church.

To be clear on that hierarchy, I am all for helping those outside the Church but no parent takes food from the mouths of their own children to feed the poor. First things first.