THIS EASTERN RITE OF THE CHURCH HAS MANY FEARING THAT IN ORDER TO PROMOTE UNITY, MASS FACING THE PEOPLE WILL BE BANNED—YOU READ THAT RIGHT! 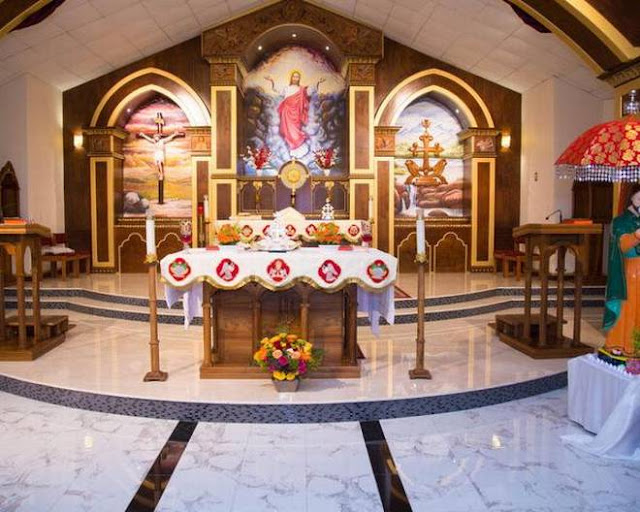 I know very little about this Eastern Rite based in India, but many priests imported from India for the Latin Rite are of the Syro-Malabar Eastern Rite.

There has been controversy over the decades about Latinizing this Rite after Vatican II especially as it concerns facing the congregation. The push by their synod is to return to ad orientem and a compromise was developed as is recalled by this article in “The Hindu” Newspaper in India in 2020:

The question whether the celebrant should face the congregation (westward) or eastward during the holy Mass, a bone of contention in the Syro-Malabar Church for several decades, is back in focus again.

In the controversy, a golden mean was struck sometime back with the celebrant being allowed to face the congregation up to the homily and then being allowed to celebrate the consecration of the host and rest of the Mass facing away from the people. Even the compromise formula has been skipped in Ernakulam-Angamaly archdiocese where the mass is celebrated with the celebrant facing the congregation throughout. There is a large section of the faithful in the archdiocese who fear a ban on Mass facing the congregation, to bring about liturgical unity.

Then earlier this week Pope Francis issued a short letter to the bishops of the Syro-Malabar Rite encouraging liturgical unity. Interestingly enough, the Holy Father releases it not from the Vatican but the Major Basilica of St. John Lateran which is the Cathedral Church of Rome:

To the Bishops, Clergy, Religious and Laity of the Syro-Malabar Church

Dear Brothers and Sisters in Christ,

The Holy See regards with special approval and encouragement the agreement unanimously reached by the Synod of Bishops of the Syro-Malabar Church in 1999 – and repeatedly endorsed in subsequent years – for a uniform mode of celebrating the Holy Qurbana, considering this an important step towards increasing stability and ecclesial communion within the whole body of your beloved Church. The concerted efforts towards applying this auspicious development in the great Jubilee Year 2000 gave joyful confidence in your sui iuris Church to my saintly predecessor Pope John Paul II.

Notwithstanding some difficulties, which require ongoing discernment in the life of your vibrant Church, the approved norms for the Eucharistic celebration have borne considerable fruit including evangelization in those places, especially the missionary Eparchies, where the whole community has joined in peaceful and prayerful observance, interpreting the continuing consensus of the Hierarchy as a fruit of the Holy Spirit.

I strongly urge the Syro-Malabar Bishops to persevere, and I confirm their ecclesial “walking together” with God’s people, trusting that “time is greater than space” (cf. Evangelii Gaudium, 222-225) and that “unity prevails over conflict” (cf. ibid, 226-230).I willingly take the occasion of the recognition of the new Raza Qurbana Taksa to exhort all the clergy, religious and lay faithful to proceed to a prompt implementation of the uniform mode of celebrating the Holy Qurbana, for the greater good and unity of your Church. May the Holy Spirit foster harmony, fraternity and unity among all members of your Church as you work to implement the Synodal decision.

Entrusting all of you to the intercession of the Blessed Virgin Mary, the Holy Patriarch Saint Joseph and the Apostle Saint Thomas, I gladly impart my Apostolic Blessing. I assure you of my closeness in prayer and ask you, please, to pray for me.

My comments: It appears Pope Francis is endorsing the Syro-Malabar’s 1999 Synod compromise on the liturgy which is basically this: The 1999 Synod basically adopted a compromise position, where the priest will face east from the Eucharistic prayers until Communion, and the people for the rest of the liturgy.

What does this tell us about the much touted but yet to appear revision of Summorum Pontiicum by Pope Francis as it concerns our own Latin Rite controversies which revolve around ad orientem and Latin?

Will the restrictions on the celebration of the EF Mass lead to a more codified revision of the Ordinary Form as a compromise? Would that compromise in fact be what has been celebrated in Rome by the Holy Father on a few occasions where the Liturgy of the Eucharist is ad orientem and the rest facing “westward?”

What say you as it concerns the pope’s vision of the liturgical unity but also encouraging inculturation which can introduce a great deal of divisiveness into worshipping communities?

Father McDonald said..."It appears too, that the Holy Father sees the reintroduction of the 1962 Latin Rite Missal as a source of division and disunity in the Latin Rite."

Pope Francis has spoken well of the TLM. He has supported the Faithful's right to worship via the TLM.

The TLM is not divisive.

The folks who have weaponized the two forms of the one Roman Rite are divisive.

From the dawn of his Pontificate, Pope Francis has supported the Faithful's right to worship via the TLM.

"I think the decision of Pope Benedict [his decision of July 7, 2007, to allow a wider use of the Tridentine Mass] was prudent and motivated by the desire to help people who have this sensitivity. What is worrying, though, is the risk of the ideologization of the Vetus Ordo, its exploitation.”

PARIS — Congratulating the Priestly Fraternity of St. Peter on their 25th anniversary, Pope Francis has expressed his appreciation for the devotion to the bishop of Rome they have exhibited.

There is also the example of the powerful support that from his days in Argentina to date, that Pope Francis has rendered to the SSPX.

Imagine the liturgical harmony that the Latin Church would experience if "traditionalists," obeyed the following:

Instruction “Universae Ecclesiae” on the implementation of the Motu Proprio “Summorum Pontificum.”

“The faithful who ask for the celebration of the forma extraordinaria must not in any way support or belong to groups which show themselves to be against the validity or legitimacy of the Holy Mass or the Sacraments celebrated in the forma ordinaria.”

With regards to a unified Latin Rite liturgy, I think Pope Benedict was setting a good course. While Benedict and Francis have different backgrounds, I don’t think Francis is on a mission to undo Benedict’s papacy. I suspect Francis will largely follow Benedict’s lead while maintaining his personal preferences. I can’t see Pope Francis abolishing or forbidding the TLM.

You always offer balance and speak sense in your comments, unlike many other hot heads blowing little more than hot air on this blog.

Folks who have despised Pope Francis from the dawn of his Pontificate to date, have declared that "Bergoglio hates the TLM."

However, I have not encountered any such declarations from Pope Francis.

What I have documented via my earlier comments here today is that Bishop Rifan declared that Pope Francis had labeled the TLM a "treasure" for the Church.

In addition, I documented statements and actions from Pope Francis' in support of the Faithful's right to worship via the TLM.

I have not encountered any declaration from Pope Francis that supports the "traditional" Catholic claim that "Bergoglio" hates the TLM...is determined to rip said Mass from folks who are attached to the TLM.

We are dealing with another discredit claim that was concocted to foment hatred of, as well as mutiny against the Vicar of Christ, Pope Francis.

Thank you for your compliment.

Peace and good health to you, your family. That applies as well to Father McDonald...and each person who reads/posts to Father's blog.

I am thankful that Father McDonald has allowed me to participate on his blog.

"Recently there was a news item about some Italian bishops griping (that’s not news) to Pope Francis (ditto) about Summorum Pontificum (as before).

"They think it should be extirpated (more of the same). Francis shot them down. That’s news."

Selective quotation is all very well, but what PF said in 2014 does not necessarily reflect what he believes in 2021.

To be honest, I do not think that even he is stupid enough to try to suppress the Usus Antiquior, and were he to do so his strictures would be quite rightly ignored.

I was Anglican Priest for 20 years. Now I a Priest in the Orthodox Church for the past 5 years. I celebrated Mass one time facing the people. It was distracting. Never again.