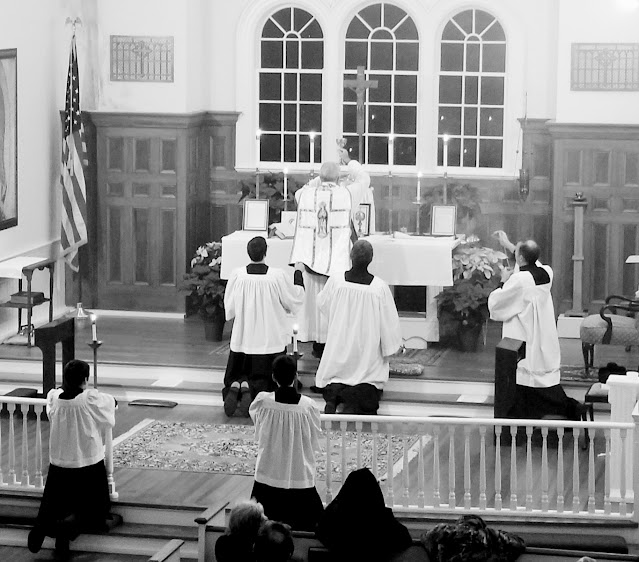 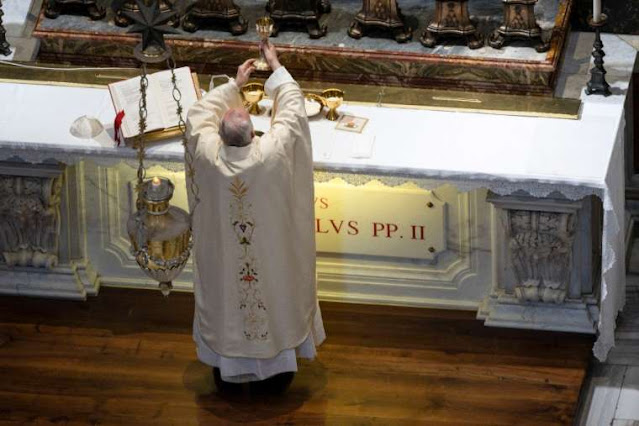 I think this is the most important aspect of Cardinal Burke’s intervention and critique of Pope Francis’ Motu Proprio:

18.  Here, it is necessary to observe that the reform of the Sacred Liturgy carried out by Pope Saint Pius V, in accord with the indications of the Council of Trent, was quite different from what happened after the Second Vatican Council. Pope Saint Pius V essentially put in order the form of the Roman Rite as it had existed already for centuries. Likewise, some ordering of the Roman Rite has been done in the centuries since that time by the Roman Pontiff, but the form of the Rite remained the same. What happened after the Second Vatican Council constituted a radical change in the form of the Roman Rite, with the elimination of many of the prayers, significant ritual gestures, for example, the many genuflections, and the frequent kissing of the altar, and other elements which are rich in the expression of the transcendent reality – the union of heaven with earth – which is the Sacred Liturgy. Pope Paul VI already lamented the situation in a particularly dramatic way by the homily he delivered on the Feast of Saints Peter and Paul in 1972. Pope Saint John Paul II labored throughout his pontificate, and, in particular, during its last years, to address serious liturgical abuses. Both Roman Pontiffs, and Pope Benedict XVI, as well, strove to conform the liturgical reform to the actual teaching of the Second Vatican Council, since the proponents and agents of the abuse invoked the “spirit of the Second Vatican Council” to justify themselves.

My comment on this paragraph and the problem with Cardinal Burke’s intervention:

The vast majority of the laity attend Mass in the UR and this must be admitted. For those who attend this Mass, which includes many young people and married couples with many children, they find the same experience that Cardinal Burke describes as the experience he has had and others he knows with the UA Mass.

I am glad he describes the abuses of the UR Mass by priests. And there is evidence that these abuses lead to the denigration of the Catholic Faith or a new Gnosticism about what the Church should be in some Catholics, clergy and laity, who experience these abuses.

But there are other aspects of the official, rubrics UR Mass that should and must be studied and corrected if need be. This has nothing to do with the new order of the Mass or the elimination of some “useless” repetition, but with the lax or non existent protocols for the selection of lay ministers for that of lector and the Distribution of Holy Communion. And to a certain extent, the failure of bishops and seminaries to properly screen candidates for the priesthood leading to scandal once they are ordained. But the laity also involve themselves in a variety of scandal.

Perhaps only allowing those laity, men or women, officially admitted to the ministries of lector and acolyte with a “seminary” preparation as well as a strict screening my alleviate this problem or lessen it. Of course this will lead to only a few or are allowed to do this in the parish, which is a good thing. The actual participation the council so desired for the revised Mass resides primarily with rank and file Catholics who participate from the pews not from the sanctuary.

In addition to that, the manner in which Holy Communion is distributed and according to the revised General Instruction of the Roman Missal could be the culprit that has led so many UR Catholics (a majority?) not to believe in the Real Presence of the Sacrament Risen Lord in the Species of the Most Holy Sacrament of the Altar.  What I criticize is receiving Holy Communion standing, on the palm of the hand and on the run. We do of the abuses to so great a Sacrament that often happen at parish UR Masses where Hosts are taken back to the pew and discarded or brought home as souvenir. It has happened frequently in every parish I have been assigned as a priest.

But watch how a majority of people receive standing, in the hand and on the run, especially children. Does this in any way promote awe, wonder and reverence or does it eat away at these experiences and lead to the dismal state of unbelief in so many UR Catholics?

I have asked it before and I will ask it again, rather than complaining about those who attend the UA Mass and their dispositions, would it not be better to improve the UR Mass with some minor changes and mostly revolving around the manner in which Holy Communion is distributed and received? Then one might look at strengthening the rubrics of the UR Mass and copying what is allowed by Pope Francis’ promulgation of the Ordinariate’s Divine Worship, the Missal which is ad orientem, the traditional order of the introduction Rite of the Mass, double genuflections at the consecrations, an additional genuflection following the Great Amen and kneeling at the altar railing to receive Holy Communion. Just these reforms to the UR Mass would go a long way in reinforcing good liturgy for this Mass and orthodoxy concerning the Deposit of Faith and what the Church believes, teaches and proclaims to be revealed by God.

To your questions, yes, that seems like a very reasonable thing to do for the sake of continuity. However, that doesn't seem to be the direction of those in charge at the moment so, it will likely remain wishful thinking.

To me, the easiest thing to do is make the vernacular side of the '62 missal UR, and the Latin side remains as UA. I can just hear the wailing regarding the readings and other things that would have to "give" to accomplish this.


The ultimate goal of new worship is not to help us to enter into a more perfect union with God but to subject us to spiritual servitude in the CHURCH of WHAT's HAPPENING NOW. This is being accomplished by replacing or otherwise eliminating the orthodox teachings and teachers. If one resists the newly fabricated heterodox dogmas of diversity, tolerance, inclusivity, but especially the "theology" of gender ideology, OUT WITH YOU! will be the marching order.

In the business world this phenomenon is known as a hostile takeover.

I suggest we call the two forms Heckle and Jeckle.

Or maybe Bonnie and Clyde.

What about Fred and Ginger?

Tweedledum and Tweedledee might be too much, don't you think?

The terms Usus Antiquior and Usus Recentior were being used before Summorum Pontificum. Why did Benedict XVI not employ these terms rather than invent the idea of two forms? After all, there are many different Uses of the Roman Rite; pre-Reformation England had those of Sarum, York, Durham, Hereford and Bangor, and the religious orders had their own distinct Uses, some of which, like the Dominican, have survived until the present day.

The answer surely is that the Paul VI Missal is too far removed from the classic Roman Rite as to qualify as a Use of the same. Significantly, the Roman Canon is optional. On Sunday I shall attend the Solemn Latin OF Mass, ad orientem and with the Gregorian Propers, and it will use the Roman Canon. One can envisage it as a Use of the Roman Rite and indeed it is authentically and gloriously Catholic, to the extent that pre-Vatican II generations would fully identify with it.

But I have to remind myself that it is merely one of several options allowed in the new Missal, and if it were an actual Use it would have developed gradually over centuries. Does that matter? Not in the least, but the way we use terminology is important.

I suggest we call the two forms Heckle and Jeckle.

Or maybe Bonnie and Clyde.

What about Fred and Ginger?

Tweedledum and Tweedledee might be too much, don't you think?

VATICAN CITY — Pope Francis’ new decree restricting the traditional Latin Mass can be interpreted in such a way that it is “perfectly reasonable” for bishops to allow existing arrangements for celebration of the older form of the Roman rite to continue in their dioceses, and for lay faithful to continue attending such Masses.

This is according to a canonical assessment issued this week by the Latin Mass Society (LMS) of England and Wales, which aims to give indications on what the decree — an apostolic letter issued motu proprio called Traditionis Custodes (Guardians of Tradition) — means in terms of the canonical obligations on bishops and priests.

The LMS paper, written in consultation with expert canonists, further asserts that the apostolic letter does not abrogate the 1962 Roman Missal, and thus leaves the right of priests to celebrate it intact even though it does regulate the way this right can be exercised.

“Our hope is that this document will contribute to a calm and reasoned discussion of the practical implications of the apostolic letter and help to prevent rash or over-hasty attempts to implement it,” said LMS Chairman Joseph Shaw.

ByzRus, it will probably come to the point where the 62' Missal will be allowed in the vernacular...Which is what should have been done in the first place. But so much damage to get to the point.

There were heresies when Latin was the spoken language, and there will be heresies long afterwards...Sadly, I think people forget that.

As for what to call them, Mass of (insert pope here) seems to work.

I've always just used the terms "the old Mass" and "the new Mass."

Православный физик said..."ByzRus, it will probably come to the point where the 62' Missal will be allowed in the vernacular...Which is what should have been done in the first place."

Basically, that's what happened at the beginning, and it was scrapped within a matter of a few short years, which is an indication that the intent of the changes, at least in the minds of some, wasn't just to foster "active participation."

Father McDonald, you made the homepage of Church Militant. Your TLM pictures are easy to come by online.

Mark Thomas - are you aware that Joseph Shaw is listed on Rorate Caeli as one of its contributors, along with Peter Kwasniewski? Do you therefore regard him as a Francis-hating, venom-spewing, Satanic mutineer?

By the way, your grossly intemperate language far outdoes PF in nastiness - indeed, it comes across as pathological. Now, will you condescend to answer my questions? After all, you are not known for your reticence in voicing your opinions.