IN RESTORING A 6TH CENTURY CHURCH, IS IT OKAY TO REMOVE A MUCH LATER BAROQUE ALTAR AND REREDOS TO RETURN THE SANCTUARY TO WHAT IT LOOKED LIKE AT CONSTRUCTION?

The first photo shows the 6th century San Vitale in Ravenna as it was prior to Vatican II’s restoration of the original look of the altar and sanctuary. By the Baroque period in the Church’s liturgical history, the original altar and bishop’s cathedra were removed. The cathedra had been at the apse’s back wall and the altar, free standing, was in the transept forward position. By the Middle Ages, altars were placed at the back wall of the apse as is seen in this photo, prior to Vatican II’s supposed mandate to renovate churches according to the resourcement theology of Vatican II: 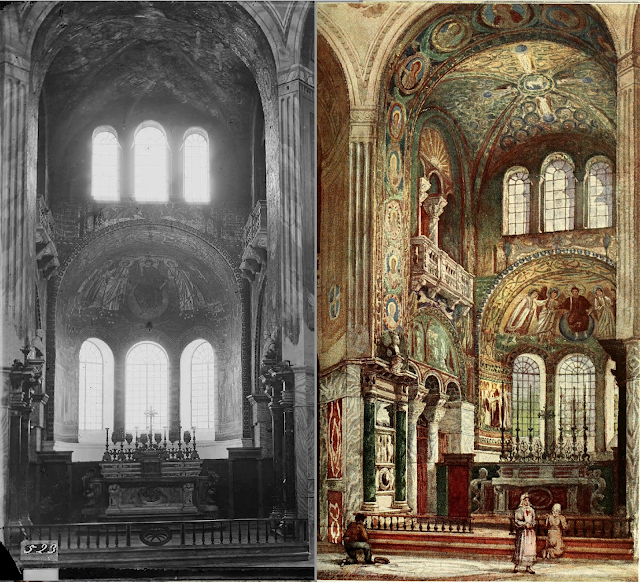 Thus the post Vatican II renovation, which some might call a wreckovation, actually returned the ancient basilica’s sanctuary back to its original look. It was a restoration not so much a renovation. Thus the baroque altar and reredos were ripped out and the bishop’s cathedra was returned to its original position against the back wall of the apse (the Basilica of St. Paul Outside the Walls has this same configuration which was never changed): 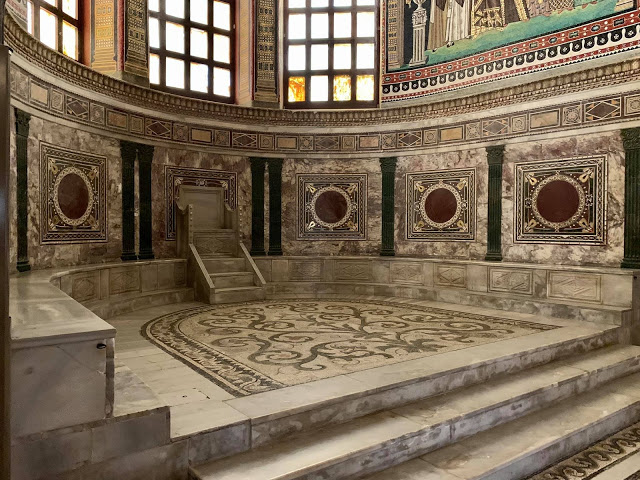 Then the free standing altar was restored to its original position toward the transept of the basilica: 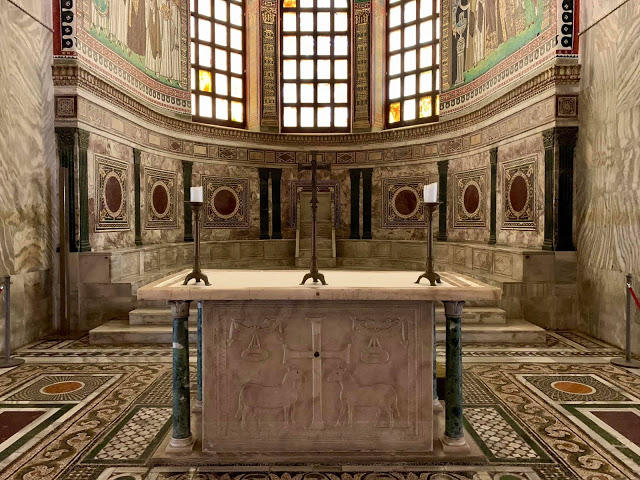 Thus, you can see by this restoration that the original look of the basilica is in fact restored. Thus, you see this configuration in most wreckovation of churches and cathedrals after Vatican II which for those churches and cathedrals were not restorations but imposing an ideology of church sanctuaries from the first few centuries of the Church upon these buildings. Here is the article with more photos of this glorious basilica. Press the title:

by Shawn Tribeon June 28, 2021
Recently, our friend and colleague, Nicola de Grandi, a native son of Milan, published some excellent photos of a trip he took to San Vitale in Ravenna -- one of the most stunning extant examples of Italo-Byzantine architecture in existence. The church dates to the sixth century and includes an incredible array of mosaics. Construction on the basilica began in the year 526 and concluded in the year 547. The church has an octagonal plan, rather than the more typical basilica model, combining both Roman and Byzantine elements.
Posted by Fr. Allan J. McDonald at Saturday, July 03, 2021

By bringing the altar closer to the people, you will increase their "active participation," so much so that it will attract so many others to participate that an expansion of the church itself will be needed.

Is that not what the liturgical movement had in mind?

Clearly its okay - look what's been done to Roman Churches throughout the world.

I liked the baroque altar. The new one isn't bad either. If the priest assumed an ad orientem posture, the candles were on the back and the tabernacle in the center, this would be no different than the holy place in a Byzantine Catholic/Orthodox Church. Priest and servers would sit on the side benches, the central throne would be reserved for the bishop.

This is a link to an older blog I had followed. The photographer who ran it has passed away. In the restored churches he photographed, that newer style altar was frequently used. I never thought it looked out of place:

The recent blog about the former Sacred Heart Church in Augusta (Georgia, not Maine!) reminds me that this independence day is the sad 50th anniversary of the last Sunday Mass at that church, Sunday, July 4, 1971. But on a happier note, happy 50th anniversary next Saturday to the last couple married at that parish, the Leonards of Decatur, Georgia.

The recent blog about the former Sacred Heart Church in Augusta (Georgia, not Maine!) reminds me that this independence day is the sad 50th anniversary of the last Sunday Mass at that church, Sunday, July 4, 1971. But on a happier note, happy 50th anniversary next Saturday to the last couple married at that parish, the Leonards of Decatur, Georgia.