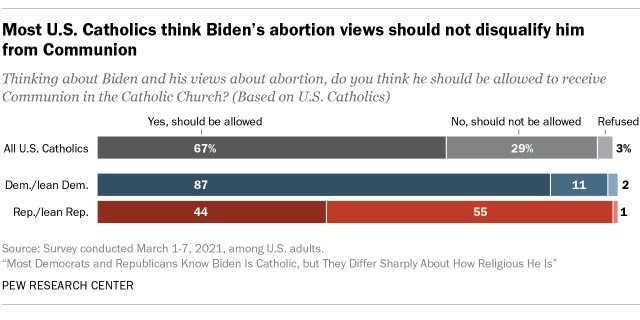 I don’t know much about Canada and its relative lack of separation of Church and state until rather recently. Religious institutions both Catholic and Protestant ran government schools to educate indigenous peoples. These were boarding schools and students were indoctrinated into the United Kingdom’s way of life as Canada was a colony and later a commonwealth of England, whose state religion is the Church of England.

To say that these children were poorly treated is an understatement. That disease and abuse was rampant is reported. That many died and were buried without proper notification to parents seems to be true.

What in the Name of God and all that is Holy happened? How could any religious institution allow this to happen and Catholic Religious orders participate in it? Mortal sin.

But, this is what I would like commentary on. As you know, in the USA many Catholics of good will want President Biden’s archbishop and bishops to tell him to stop receiving Holy Communion until he repents of his pro-choice political agenda and the laws he has helped to enact that promotes the genocide of unborn babies.

Progressive Catholics are having a conniption fit over the thought that a Catholic president who goes to Mass each Sunday would be treated so poorly by his Church. We should celebrate that he is a practicing Catholic they say.

Should we not celebrate the men and women who become nuns and monks and priests who worked in the government institutional schools of Canada, where children died as they do in abortion?

I wonder how progressive Catholics would feel about a native Canadian asking Catholics to boycott going to Mass and thus boycott receiving the Most Holy Eucharist to make a political point? I bet they support this layman!

IN CANADA, CALLS FOR CATHOLICS TO BOYCOTT SUNDAY MASS

From the CBC:  Percy Miller stopped during his walk in downtown Saskatoon on Friday morning to look at the signs,

Although schools were often underfunded, do not forget that this was the pre-innoculation age and pre-antibiotic age for the most part, and disease swept like wildfire through boarding schools, towns and cities, and quite a high number of religious died at those remote institutions and were buried also in graves lost to time.

I have no idea how many children cycled through those schools, but the graves mark a minority for sure. The government would have done the rounding up of the children, and the only one who knew from whence they came or to whom they belonged. And the government obviously did not care, bent on cultural eradication for fear of rebellion.

Today, records are nearly non-existent due to almost all such records were given over to the govt for wartime paper drives. We have no idea what epidemics swept through or how hard religious might have tried. For sure, there are many also happy stories of those who went through those schools that are in the public domain.

Just to make clear, for the most part, religious would have gone and served at those schools the exact same way they went to prisons, the primitive hospitals of those times, asylums, prior age slave ships, etc, their mission to save souls and alleviate suffering to whwtever degree their meager resources allowed. Of course there are always bad people and bad institutions, but for the most part these religious would have been suffering with and often dying with those for whom they cared as various diseases swept through, the same as they did in their own cloisters of that time.

Bede to Therese are witness to the scourage of disease in communities, and at that time and in those remote schools there was no medivac helicopter standing by to wisk the sick to a modern hygenic hospital, and instead where religious at either place could merely try to bathe and assist until you either recovered or died.

The media and this blog entry parroting same do a huge disservice to those who struggled through what must have been tremendous suffering and heartbreak for many religious doing their very best and often dying in their vocation.

Another Vatican II "success" story!!!! Yet it appears the Vatican wants to stick it to the most faithful community of Catholics - the EF community.

As you know, in the USA many Catholics of good will wanted those Catholic politicians, officials and advisors of President Trump’s administration archbishop and bishops to tell them to stop receiving Holy Communion until they repented of his political agenda and the laws he has helped to enact that promoted the genocide of the poor by their criminal negligence in their public health response to the Covid-19 pandemic, as well as restarting the executions of those (often wrongly convicted) of various crimes.

I think you are confusing President Trump with Governor Cuomo, Mayor DeBlasio and Nancy Pelosi who encouraged people to go to Chinatown and the Subways to "stick it to the man." Your narrative is pure hogwosh

ps: you are on a roll this morning with more fake names than usual

Here we see the mass media again doing satan's work. Unmarked graves are nothing new. Wooden crosses do not last very long, and where was the money to build stone monuments to both children and adults (eg teachers) going to come from? Certainly not the federal government which did not provide much money to "civilise the savages", even relying on religious volunteers to do their dirty work. The government would not even send the bodies back to the parents because there was no money allocated for this. We know how bad some of these residential schools were poorly built by the government as fire traps, and greatly overcrowded, with sick children being kidnapped by the government and sent to these schools, only to infect the others such as with TB and swine flu. Antibiotics did not come around to treat contagious deadly diseases until after WW2, when the death rate in these schools finally started decreasing. And who was going to pay doctors to attend to these remote schools....certainly not the federal government.

Much of the media and others (particularly the big social media today) are against the Church, and we see how they always pervert facts for their demonic purposes, whether for this or Covid-19.

Today, anything that you hear on the media or social media needs to be researched for accuracy and bias, yes requiring a bit of time and work. This goes well beyond George Orwell's greatest imagination.

Well, Pete, the schools were run by the Church for over 100 years starting around 1877. That's SEVENTY-EIGHT YEARS or operation prior to 1965, the end of Vatican Council Two.

As for the "What about the good things the schools did!?!" "What about the happy stories!>!" comment above, consider the following practices before diving into that morass or obfuscation. The children in the school were:
· Forbidden to speak their Aboriginal languages
· Required to speak English or French
· Required to adopt religious denomination of the school
· Forced style of prayer consistent with school denomination
· Forced haircut, or shaved head
· Use of toxic chemical to clean children’s hair and skin
· Forced to wear uniform as designed by the school
· Forced to shower, no access to bath tubs
· Lack of nutritious diet
· Insufficient quantities of food
· Served spoiled food
· Segregation based on gender: brothers and sisters no contact
· Sexual assault
· Forced abortions
· Electrical shock
· Force-feeding of own vomit when sick
· Exposure to freezing outside temperatures with improper clothing
· Withholding of medical attention
· Exposure to contagious illness: students with tuberculosis not segregated
· Forced labour in unsafe work environments
· Vilification of cultural traditions
· Use of racist language to address students
· Withholding presents and letters from family

Truth and Justice.....with a name like that, you would think real truth meant something, but instead you take worst cases and apply them everywhere for all time while totally ignoring all the exceptionally positive stories which also come out of such schools and are widely publicized.

No argument from me that the concept of the schools was wrong, and there were some truly horrible places/times/people, but you wish to utterly ignore anything good of those times including the many good people doing the very best they could, including dying with these children in the middle of nowhere, and instead paint them all as sadistic fiends.

You assume much and when you assume you make an ASS of U and ME.

Truth and Justice Kavanaugh is on a roll! LOL

For those wanting the TRUE story of the schools and graves, by the Canadian Truth And Justice investigation, you can read a synopsis here....

And/or read the official final report here in pdf...

Chip - And Mussolini made the trains ru on time. Let's focus on THAT and not the rest.

The point being many who were in those schools recount generally decent treatment and also gained life bettering skills, while fondly remembering religious doing their best with limited resources. And things also generally improved after WWII and health care advances in general.

The limited resources were the fault of a remote and uncaring government who by and large was responsible for mistreatment and horrific policies. The majority of religious were doing the same as they would in a prison or orphanage, and doing what they could against overwhelming circumstances.

By ol' "Truth and Justice"'s post above and lights and mile wide brush strokes, I suppose folk ministering today in prisons should leave off lest they be tainted by injustice, and should have left slaves to die and rot alone in ship holds and pens.

And ol' "Truth and Justice" utterly dismisses the fact that those who cared for tubercular kids, kids who likely would have had same diseases running rampant and same high mortality rates back in tribal areas, had many of those same workers catching and dying from these same diseases, as religious have willingly done throughout history when nobody else would.

Chip - And Mussolini made the trains ru on time. Let's focus on THAT and not the rest"

As usual, once confronted by actual evidence and facts, OOPS, time to change the subject to something entirely unrelated.

Chip - No, I didn't change the subject. You went into an "Accentuate the positive" song and dance routine above when, in the face of the tragedy that us unfolding in Canada, you said, "For sure, there are many also happy stories of those who went through those schools that are in the public domain."

When confronted with the horrors of Mussolini's regime, some said, "Oh, but he made the trains run on time" as if telling the "happy" side did anything to ameliorate the depravity of his crimes.

How much good have you done? How many conversions, how many vocations? How many politicians have you convinced to not vote for pro abortion policies and abortion funding?

Historians are allowed to make value judgements and when it comes to evaluate the treatment of the aboriginal inhabitants of British North America, the Canadian model of assimilation (however unfashionable nowadays, and certainly open to criticism in the way it was implemented) might be seen as preferable to the United States model, which assumed that assimilation was not feasible, and opted for what amounted to extermination.