What if, when St. Joseph Church in Macon, Georgia underwent its renovation/restoration, that the celebration of the Liturgy of the Eucharist even in the Ordinary Form, was encouraged to be ad orientem and no free standing altar need be placed in front of a fixed ad orientem only altar/reredos?

It would have led to a cheaper renovation and I think a more handsome renovation although what was accomplished is a marvelous compromise given the obsession with so many that the Mass be celebrated westward even for the Liturgy of the Eucharist.

Just look at the work in progress image of St. Joseph. If we were allowed not to have a freestanding altar, all that needed to be done was to get rid of the horrible, rinky-dink post-Vatican II freestanding altar which would return the focus to the original altar with its three steps up from the foot of the altar.

What I do not have a picture of is the fact that the celebrant’s chair in the pre-renovation photo along with the two servers’ chairs on ether side of it, was placed at the top of the third step hiding the mensa of the old altar and making the priest’s and altar server chairs the highest point in the sanctuary.

As I mentioned in the previous post, everything remains as it was under the 2000 renovation: 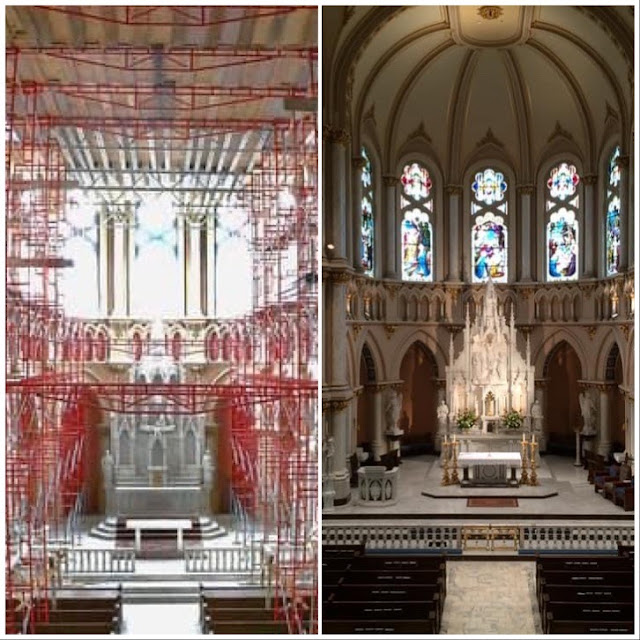 I hope the cathedrals and churches in your diocese and in your state are receiving the same protection the cathedral and many churches in our archdiocese are receiving.
I find it incredible how little media coverage is being given to the arson attacks etc on many Catholic churches in Canada and elsewhere.
Imagine if the same number of mosques and Islamic centres (or even indigenous people's cultural centres) etc were being burnt to the ground in the USA, Canada or the UK?

It is sad, too, to reflect on the reality that many decent, devout Protestants, Muslims, Sikhs and Jews would all be equally appalled at numerous arson attacks on Catholic Churches.

Also, imagine if someone in England had successfully incited arson attacks on BBC buildings on account of the sex crimes against minors a number of past BBC performers had been convicted of...

Side note, any idea what the original baptistry and confessionals were like? I would love to see pictures of both if there are any.