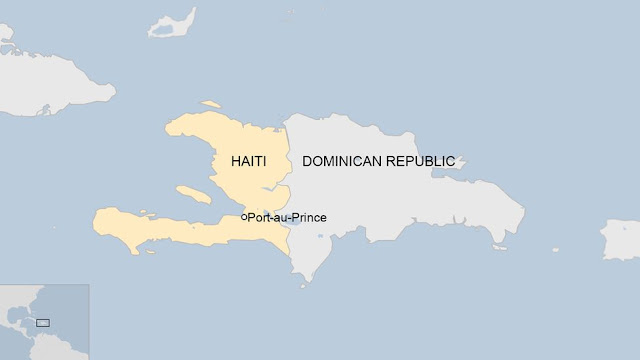 THIS IS A FASCINATING INTERVIEW GIVEN TO THE PILLAR:

Fr. Louis Merosne, rector of (Haiti’s) Cathedral of St. Anne in Anse-à-Veau, talked with The Pillar about the state of affairs in his country, and where he sees God in the midst of tragedy.

Here are some excerpts:

So spiritually, the question might be: ‘God, where are you? Why do we suffer so much? Why have we been suffering so much?’

Yes indeed, there are different religions in Haiti, including voodoo. But when we look at a country like the U.S. which kills its own babies in the womb every single day by the thousands legally, I don't know anything that Haiti does that is worse than that. And yet America thrives.

I think it’s a scandal that as brothers and sisters in the Catholic Church —  all over the world, as one big family —  it is scandalous that some members of the family are literally dying of starvation while others are feasting to the point of not knowing what to do with their excess food.

This is not, by the way, to give guilt to any particular person. And I give the benefit of the doubt to my brother and sister Catholics who are in a different situation. This is describing a situation. But it’s scandalous that that is happening.

It means, therefore, we need to be conscious of this fact that it’s happening and we need to feel a sense of urgency and responsibility for our brothers.

I have two words "Clinton Foundation"

Haiti is described as 75% Roman Catholic and 100% voodoo.

Here's what I would say to Father Merosne:

It is not fair to complain or suggest that Catholics (or anyone else, for that matter) outside Haiti don't care, or are lacking in generosity! Vast, vast sums of money have been contributed privately or appropriated by government, all aimed at addressing the many problems Haiti has. How much more will it take? Name a dollar figure, because frankly, providing money to pay for almost anything, is the easy part.

Father Merosne is correct in saying education would be a big help, except for two things: I wonder how many of those educated in the U.S. would go back? And, if they do, will they really be listened to?

I can think of things that maybe could make things better in Haiti -- being taken over by someone else and rebuilt the way Japan was after World War II -- but I doubt the people of Haiti would go for it, and who wants to take on that task under any circumstances?

Lots of us on the outside can think of answers; but Haitians must win this fight. I say it again: the problem is not a lack of goodwill from outside. Lots of people look on and wish they knew what really *would* help, but we've grown cynical and we aren't interested in dumping more money in to further enrich the crooks.

My niece and her husband go to Haiti regularly to volunteer as relief workers. They tried for years to adopt an orphan associated with that mission. Every step of the way they were met with extravagant demands for payments and a guilt trip that they were stealing a child from that nation. They eventually could not afford the demands. The child will stay in Haiti and the money donated to his orphanage and schooling.

The assasination of Jovenel Moïse was one of the worst things to happen to Haiti. On of the most important things that country needs is a legitimate, transparent government. One of the things that prevented monetary aid being delivered to that country was a corrupt government. The other problem was that the money wasn’t going to the government to aid in a unified strategy to rebuild the country. On one level parish twining makes sense because it is a way of providing aid in a transparent way. The down side is that it emphasizes the Church as NGO, and undercuts the role of government.