LATEST MEDICAL UPDATE A CAUSE FOR CONCERN? 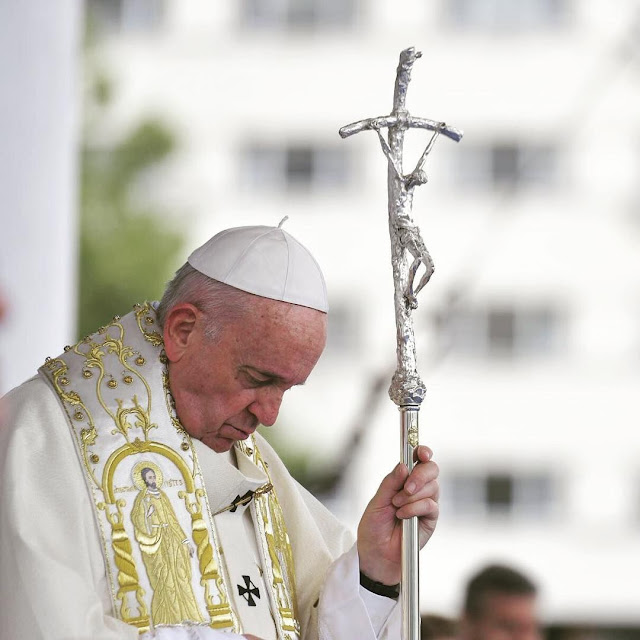 At any rate, here is a pray for the Holy Father who needs our prayers:

PRAYER FOR THE POPE

V. Let us pray for Francis, our Pope.

R. May the Lord preserve him, and give him life, and make him blessed upon the earth, and deliver him not up to the will of his enemies. [Psalm 40:3]

Say the Our Father and the Hail Mary.

O God, Shepherd and Ruler of all Thy faithful people, look mercifully upon Thy servant Pope Francis whom Thou hast chosen as shepherd to preside over Thy Church. Grant him, we beseech Thee, that by his word and example, he may edify those over whom he hath charge, so that together with the flock committed to him, may he attain everlasting life. Through Christ our Lord. Amen.

Sunday evening's surgery lasted about three hours. He will most likely remain at Gemelli hospital for seven days.
READ ALSO 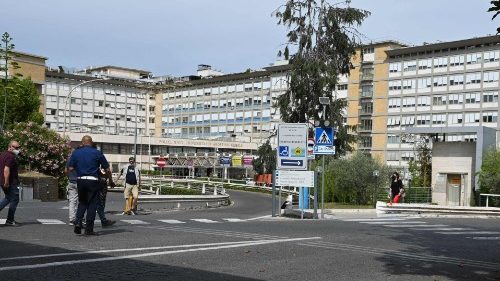 Pope Francis is doing well and is alert, according to a statement released by the director of the Holy See Press Office, Matteo Bruni, in the latest medical bulletin released regarding the surgery the Pope underwent on Sunday evening.

Matteo Bruni said in his statement that Pope Francis is doing well overall, alert and breathing on his own. He said a hemicolectomy on the left side took place during the surgery, which lasted around three hours. He added that the Pope will remain at Gemelli hospital for seven days, barring any complications.

Well, as I said yesterday, the stated diagnosis was the inside of large intestine was being blocked by scarring from diverticulitis, but they could not know for certain that was all it was until all of the blockage could be examined, which they cannot do only by scoping and snipping limited samples.

It was extensive enough that one side of the colon was removed, hopefully they were able to resect to a complete colon run to rectum and so avoid a colostomy bag.

Considering he was having problems enough to require scoping and never a peep got out until his surgery, am not really expecting much news to get out if they also find cancer involved until it impossible to hide. Which is fine with me, as I have no right to know details of somebody else's health problems, anymore than they have a right to know mine.

This is a rough procedure on anybody, and I feel for the poor guy. It comes for all of us, no matter state in life and mainly is never pretty.

Since every Catholic news source and just about every amateur commentator (like myself) has been predicting a document limiting the TLM and predicting it is coming soon, one can't help but wonder if somehow Providence permitted this to happen now. I am not a conspiracy theorist, but there are no coincidences either.

Did the Pope refuse special medical care and demand the same care that the average Italian would receive under the public care system? He should have to be consistent with his criticism of unequal care for the rich. He recently did this when he was suggesting that the USA should pay to vaccinate all poor countries with the COVID vaccine. This may sound cruel but it is exactly at a time like this when you have the opportunity to test someone's sincerity in their stated position. If he didn't have an everyday surgeon perform his operation then he needs to be asked why not.

Il Messaggero reports (no idea how trustworthy they are), that the surgery started laproscopically but that unspecified complications required they ditch that plan to open him up.

IF even true, the first thing which comes to mind is that whatever they found was larger than planned.

Michael A, apart from having his own floor inherited from John Paul II's various needs due to frequent trips caused by complications from wounds, Francis is having the same surgery you would get if you had whatever these problems, although you are free to have yours minus anaesthesia if you want to show Francis just what a pampered privileged sissy he really is. Some of the cheap shots taken by folk here are enough to gag a maggot, and both sides say they are on the side of the angels.

Francis rejected the room that John Paul lived in with a mattress on the floor. He made a big to-do about how he was moving out to live in the humble hotel. Not sure why his medical care should not be the same? I think politicians in this country should all pledge to have their surgeries performed by unionized government doctors that cannot be fired for malpractice. If he had mentioned that having anesthesia is a rich man's privilege then yes I would ask him if he had his surgery without it. However I don't recall him saying it so that's not the issue.

Tom, the same Divine Providence you theorize might be working to preserve "unrestricted" (yeah, right) TLM also allowed it to be essentially suppressed for a very long time.

Michael, there is a time and place for saying, "oh, yeah? whattabout...", and when someone's life is in danger is NOT that time.

Yeah Chip, I am aware that God has allowed a lot of things to happen that I might not particularly be happy about. If anything, I was just thinking out loud, wondering what God is up to--I don't presume to know the mind of God. But your comment is a good reminder that most thinking should probably not be done out loud. My apologies.