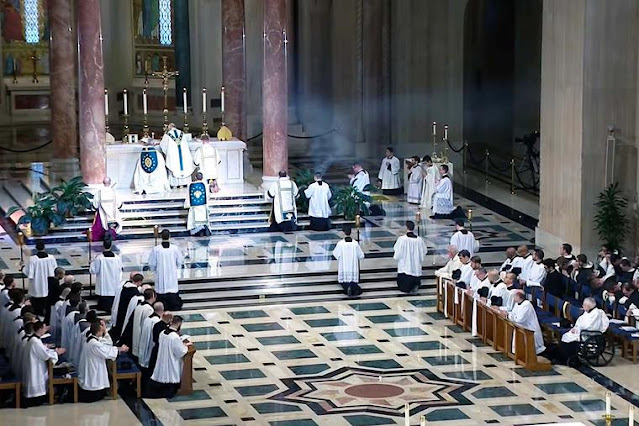 There was to be a Pontifical Solemn Chanted Mass in the UA form for next Saturday’s Vigil of the Assumption of the Blessed Virgin Mary, also known as, the Dormition of the Most Blessed Mother.

However, the Cardinal Archbishop of Washington, formerly the Archbishop of Atlanta and my former Metropolitan Archbishop, in light of Pope Francis’ Motu Proprio, has forbidden this UA form of the Mass at the Basilica Shrine of the Immaculate Conception.

What a lost opportunity for the Cardinal Archbishop of Washington, DC to offer a pastoral olive branch to those who had centered their vacations around this Mass while visiting Washington, DC.

And yet this type of Mass has no approbation and this is why Pope Francis’ Motu Proprio is such a scandal to Catholics who love the UA Mass: 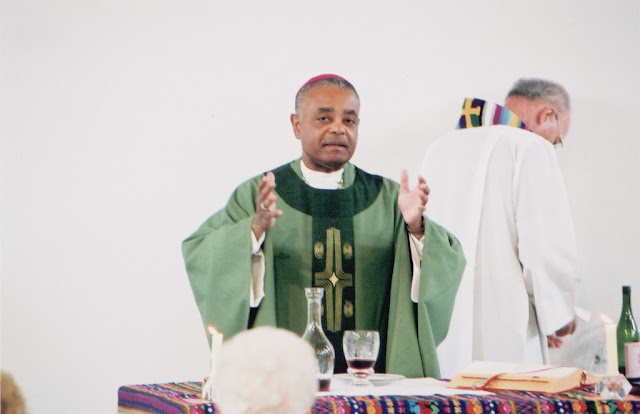 A picture (of a bishop using a water glass for Holy Mass) not only speaks “a thousand words,” it tells you all you need to know.

The Wilton has a different set of priorities, liturgy likely falling near the bottom of his list.

So WHAT is his priority? Hint: Think of parades in major cities in June every year.

So what is the tragedy? He apparently doesn't even feel any sense of shame for it.

McCarrick is surely proud of his successor. Bernardin would be proud too.

Is he holding a wine tasting session? It can't be Mass that he's saying with the bottle of Chianti on the small card table and the Pride flag draped over it. If he's going to be bishop somewhere I guess D.C. is the best place to put him.

The Vigil Mass of the Assumption in the older form, like all Vigils, has a penitential character (violet vestments, no Gloria or Credo, and no Alleluia before the Gospel).

In the Novus Ordo white vestments are used, the Gloria and Credo are sung, as is the Alleluia. The Proper chants (Introit, Gradual, Offertory, Communion) are retained, and the Alleluia 'Felix es' is added.

The lections and orations are different. Celebration of the Novus Ordo in Latin and ad apsidem requires no approbation in any case, nor does kneeling for Communion. In a Pontifical Mass a lot of the rubrical detail is no longer required but in the interests of greater solemnity it can be added ad libitum. I have seen bishops celebrating the Novus Ordo vested in pontifical dalmatic and episcopal gloves, with deacons at the throne and an assistant priest wearing cope over choir dress.

Whether Wilton Gregory was overreaching himself in peremptorily cancelling an already planned event is a different matter. At the very least it was bad manners. His own liturgical sensibilities are notably lacking, if appearances are anything to go by.

John, I don't know for sure, but I would presume that in this case, if the Mass had been allowed to go forward, that the influence of the Ordinary Form for a Vigil Mass would have taken place and the Mass would have been the Day of celebration of the Assumption, not the one you describe for the vigil in the 1962 Roman Missal mindset. I can't imagine that it would have had a penitential character unless at the last minute and because of the Motu Proprio, they chose that option if the good Cardinal had allowed it to go forward.

There is a fine article on Veterum Sapientia at the New Liturgical Movement this morning by Dr. Nancy Llewellyn, a first rate Latinist, discussing the interplay between it, the Counciliar reform and the just issued motu proprio. If John XXIII had not died when he did, Latin would have undergone a major renewal in seminaries and universities, but alas, his death caused the regulations of Veterum Sapientia to go into full force and effect. Here is the money quote at the end of the article:

"Whatever the fortunes of Traditionis Custodes may be, it should be clear that it is ordered toward the shaping of a future Church which will be, in its liturgical and cultural features, not consonant with but rather a break from the unitive vision and hopes of St John XXIII. His name, therefore, and that of his epochal Council, ought not to be invoked in its support."

The Saturday evening 'anticipated' Sunday Mass which fulfils the obligation is often referred to as a Vigil Mass, which can be confusing since there are eight Vigil Masses in the 2002 Roman Missal which are directed to be used the evening before the Solemnity to which they apply. They have different readings and chants from the Mass of the Feast. This year Assumption falls on a Sunday, so do you anticipate the Mass of the Assumption or use the actual Vigil Mass as the Missal directs? Since either satisfies the obligation, you could attend the Vigil Mass but skip the Mass on the feast itself, which seems strange.

I don't see any way that in the EF the Assumption can be celebrated on 14 August. Even the option of celebrating a votive Mass of the BVM which applies to most Saturdays cannot be used since there is a Vigil Mass which takes precedence. Over the centuries Vigils gradually took on a more penitential character, and we all know those who produced the Novus Ordo didn't do 'penitential' - look at the Lenten Collects.

But in 1962 the older form of the Vigil as I described it was still in place.

To my knowledge (and I watched for it) then Abp. Gregory made no public comment on Pope Benedict's Moto Proprio of 7/7/07. While resident in that diocese, I was told by more than one priest that the FSSP parish -- the only Latin Mass in the diocese -- was a "quarantine zone".

He did not impress me as a shepherd. Neither was I impressed with him as president of the USCCB during the actions on the sex scandals.

Finally, I was not even mildly surprised to read of his action on this Moto Proprio. Sad, but not surprised.

Ah, the kool-aid pitchers/glass "chalices"...Brings flashbacks to Mahony, and that's not a good thing.

To be fair, the altar and set up in that photo looks like a small chapel or retreat setting, rather than a proper church. As a bishop, you are invited to celebrate mass or make pastoral visits to various settings - and you make do as best you can with what’s available even if it’s a temporary / moveable arrangement. Not everywhere has a fully fitted chapel and it would be rude or disrespectful to make a fuss just because it’s not your personal preference. Without knowing the context, you shouldn’t make a rash judgement!

Besides, I’m sure there are plenty of photos online of AB Gregory saying mass in more formal settings.

A bishop/priest should not celebrate Mass with a glass receptacle - it is a reprobated practice. No excuse for that. If you check the internet you will see Archbishop Gregory wears garish, almost clownlike vestments. He is not a practitioner of ars celebrandi