FROM THE LITURGY GUY: IMAGINE THINKING THAT THE TRADITIONAL ANCIENT MASS OF THE ONE ROMAN RITE IS WHAT IS WRONG WITH THE CHURCH

AS THOUGH THE ANCIENT CATHOLIC MASS IS MORE DIVISIVE AS THIS HORRIBLE SCANDAL AND OTHERS LIKE IT! READ THE TRUE DIVISIVENESS HERE. 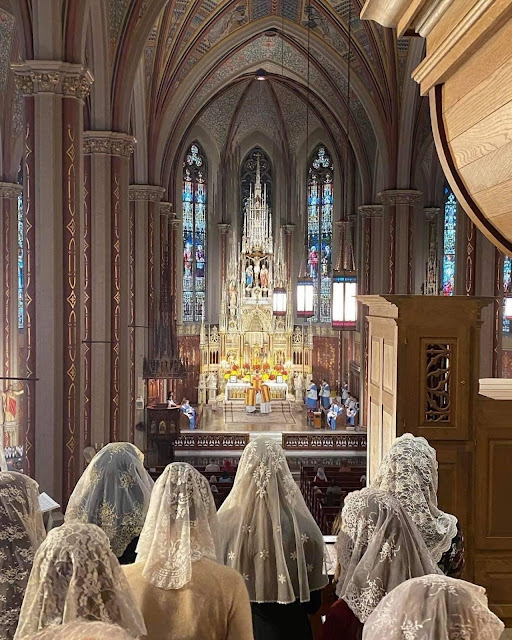 The link does not work.

You’re too quick! It is fixed.

Cardinal McCarrick has been responsible for a number of problems and, as much as I detest his record of sexual abuse, I am even more deeply bothered by his record in two other areas that have had long-term consequences. These areas are:

1) His role as a "king-maker" for episcopal appointments in the U.S.

2) His "deal" with the Chinese Communist state that effectively threw the true underground Catholic Church under the bus and allied the Church with a government that is essentially a worldwide criminal enterprise.

Cardinal McCarrick has been laicized. He is STILL a priest however, as ordination imprints a permanent characteristic on the soul of the ordained. In his case, laicization means that he has been stripped of his faculties, honors and titles. At 91, his time on this earth is short.

However, since he is a priest, we as Catholics are in a very uncomfortable situation. As much as some of us might like to see him suffer, laying hands on a priest and treating him roughly or violently is SACRILEGE. If we advocate for placing this man in a situation where he is likely to be treated roughly (and outside of solitary confinement, that is virtually guaranteed for a sex offender entering prison), if we advocate or support that, then we are advocating and supporting the sin of sacrilege--no small matter.

So what are we to do with McCarrick and the likely increasing number of priests (laicized or not) who will be entering the corrections system? I don't have any answers, but I think this merits serious consideration and discussion.

Rough treatment is somewhat subjective. Since there is little physically or financially that would be satisfactory then we should press for justice in its truest form and have him confess everything and everyone he used to injure the Church and pursue them to the ends of the earth.

You worry too much. But you are not alone. Modernity codles criminals in and especially outside the Church. McCarrick has the privilege to suffer in this life. It is nothing compared to what awaits him should he remain unrepentent.

I am as repelled by the coddling of criminals at the expense of the rights of the victims as anyone could possibly be. I support the death penalty and believe that convicted sex offenders deserve the living hell that prison offers them. However, should he be convicted, McCarrick (and other priests in the prison system, laicized or not) present a troubling exception.

Since I am too lazy to probe in to the code of canon law, I found this on Wikipedia--hardly the most accurate Catholic source, but in this case, they offer few mistakes:

"Personal sacrilege is irreverence shown to a person consecrated by religious vows (monks, nuns, etc.) or by holy orders (deacons, priests, bishops). Ridiculing, mocking, or abusing members of the clergy is considered personal sacrilege, as often the animosity is directed not at the person themselves but at the Church or at God whom they represent. Whenever those in religious or clerical life violate the sixth Commandment and break their vow of chastity, it is considered a personal sacrilege on their part. Laying violent hands on a cleric used to incur an automatic excommunication from the 1917 Code of Canon Law. Since 1983, only someone who physically attacks the pope is excommunicated."

I have been guilty of the verbal part of this canon and taken it to confession. I fear I probably need to again. I don't think I am worrying too much, when my eternal destiny depends upon it. However, when we ALL join the mobs demanding the incarceration and rough treatment of the ordained, we are crossing into a dangerous place.

Again, when I look at some of the ordained priests who have committed sex crimes, I see a lot of men who never had any business being in the seminary. I see people who would make my skin crawl even if they were not priests. But since they are, we have to hold ourselves accountable for our own response to this endlessly troubling phenomenon--a phenomenon I expect to only get worse until the Church recovers from its 60 year stupor of managed decline.

At his age, I wonder what, practically, could be done for the sake of justice.

Beyond the rehab center of which he is currently a resident, the Church should take responsibility for his welfare/care resulting in him living a supervised life in a strict monastic situation with no secular pursuits/pleasures. He prays/repents/is counseled, reads the word, eats, exercises to maintain himself and has access to medical care all the while being escorted by no less than 2 brother/friars to and from the aforementioned. Period.

My point with my previous comment, the former cardinal led a sham of a life highlighted by profound selfishness and self-centeredness as he pursued his repugnant desires aided by a gross abuse of authority. My suggestion is to humanely and compassionately provide him with a highly structured environment, completely free of worldly cares, in which he can atone and prepare himself for that which awaits his arrival.