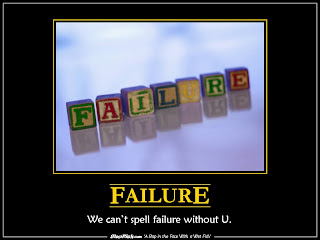 The first form of failure of Catholicism which is completely disastrous is Catholicism that is unfaithful to God and His will. This is infidelity. The type of infidelity that I mean is that of liberal Protestantism that has refashioned its worship, its theology, its morality and its doctrines to confirm to the spirit of the world as Saint John's Gospel understands the term "world."

There are progressive Catholics who want the Catholic Church to be as unfaithful as liberal protestantism is. These denominations make fine country clubs and for good fellowship, but they miss the mark and are too much aligned with liberal politics.

To fail at Christianity as they are is not a good thing by any stretch of the imagination. These groups are not growing, they are irrelevant and shrinking.

The second form of failure for Catholicism is misguided, but well meaning renewal in light of the documents of Vatican II. This group deifies Vatican II and becomes idolatrous. It also freezes the Church in the post-Vatican II period of experimentation and failure.

There are many who fit this camp of the Church, good people gone wild, or at least gone in a misdirected direction. One such person is the former Bishop of San Francisco, Bishop John Quinn. You can read is recipe that has led to a certain kind of failure in the Church which is not good and in fact disastrous.

The National Chismatic Reporter has an article on what Archbishop John Quinn of San Francisco recently said in a talk, you can read the synopsis of hit and a link to his talk by pressing here for Former San Francisco archbishop calls for papal reforms ahead of conclave!

The author of the NCR article Tom Fox is as schismatic as you get as a progressive, post-Catholic reporter. So if he and the National Chismatic Reporter like Archbishop Quinn's misguided suggestions for papal reform based upon what many thought what began to happen in the 1960's and 70's was what was meant for the papacy and Catholicism, you know that he and the Archbishop are a dying breed of progressive type bishops and laity who soon will be no longer.

The third type of failure is that of our Lord and our Pontifex Maximus Emeritus. This is the type of failure which is based completely upon the will of God for His Son and the Church.

Failure based upon Luke 22:42 is success for the Lord and His Church: " "Father, if You are willing, remove this cup from Me; yet not My will, but Yours be done."

Failure based upon the following is in continuity with Luke's passage also: Matthew 27:45-46, "Now from the sixth hour darkness fell upon all the land until the ninth hour. 46And about the ninth hour Jesus cried out with a loud voice, saying, "Eli, Eli, lama sabachthani?" that is, "My God, My God, why hast Thou forsaken Me?"

If the Church fails because of its fidelity to Jesus Christ in these two things, resurrection is right around the corner.

If the Church fails because of the first two reasons for it, we're doomed!

Father,
Were there as many wolves at the door of the Catholic Church Pre-Vatican Council? Or is this how it always has been and always will be? Does the "world" ever get tired of trying to tear down the Church?

Your first failure describes my parish to a tee. Every week we celebrate the triumph of ignorance and dissent.

It's within driving distance of your parish.

One of my favourite quotes in all of literature is this, "Our cause is never more in danger than when a human, no longer desiring, but still intending, to do our Enemy's will, looks round upon a universe from which every trace of Him seems to have vanished, and asks why he has been forsaken, and still obeys."

There are those on the Left and Right who threaten to leave based on the Pope might be, or what he does, or the translation, or whatever. I am completely convinced that there are big mistakes that attend Vatican II, but I know that the Pope and the clergy are selected by God to tend me. My father was in the Navy and told me, when I enlisted that the Captain was probably an idiot, but that he was my idiot and we failed or succeeded together. I would be almost as surprised that the next Pope, or the revived B-XVI would be willing to reverse course on Summorum Potificum. I also do not expect he will lurch to the Right very far.

The idea of a vote of confidence is appealing because it would mean the Cardinals were publicly saying they would get with the program and earn the red in those caps.

Good Father - What, specifically, in Archbishop Quinn's suggestions do you find potentially "disastrous"?

Quinn makes some valid points. The problem is, that like many revolutionaries of his generation, he sees, albeit 'per speculum in aenigmate' the vision of a future Church which would be nominally under Rome but locally autonomous. Such structural changes as he advocates are means to this end. However, the revolution was halted in the mid-1970s. Rome balked at the idea of regional liturgies being composed more-or-less from scratch, and the Milingo affair showed what happens when 'inculturation' is taken too far. The power and prestige of the papacy actually increased during the reign of JP II, and there was much muttering on the sidelines.

There is a good deal of talk about 'reform of the Curia' in liberal circles, but when you reform something you make it more effective, and do they really want a more effective central body? The key curial departments (CDF, CDWDS, Apostolic Signatura to name but three) actually function quite well. The Secretariat of State and the papal household need looking at.

Reform is only supported by liberals if it helps them achieve their ends. In Portsmouth (England)the new orthodox bishop, Philip Egan, has decided to put the principle of subsidiarity into action and actually rule his diocese. Last month he announced a complete overhaul of his own curia, sweeping away the worst of the expensive and largely useless lay-run departments. Howls of protest from the liberals - "throwing people out of their jobs", "disempowering the laity, especially women", blah, blah, blah ...

I would agree with you John especially that reform would make the curia more responsive and perhaps progressives fear that. I also agree that local dioceses have become bloated with useless personnel so that on paper there looks like a lot is going on, but in reality, less is happening and what should be done is hampered.

@John Nolan, being a member of the laity and a woman, I would find sympathy with people losing their jobs. The management system in our church is broken. Going backwards will send more people packing. We don't have the Legionairies of Christ scandal, first reported to Rome in 1976, finally tended to (in a manner unacceptable to most Catholics) in 2005, in an efficient system based on the welfare of the flock rather than the esteem and reputation of the Church. Jesus continues to weep. Your blah, blah, blah comment shows where you're coming from.

People losing their jobs is always unfortunate. However, there are too many "jobs" that are political fluff, bureaucratic do-nothing positions, and positions by fiat created by those seeking sycophantic dependents. These "jobs" need to go, whether occupied by men or women. Perhaps they should not have cast their lots with political ephemera...and, no one is picking on women. Are you wearing your "VICTIM" t-shirt today?

Good, I'm glad you see where I'm coming from. If you get rid of posts which should not have been created in the first place, it is inevitable that people will lose their jobs. What's the alternative? Carry on as before? One of the posts to go is that of Paul Inwood, the long-time diocesan 'director of music and liturgy' who ran his own music publishing business from the diocesan offices and imposed his 1970s musical and liturgical tastes on a captive audience. I understand his wife also has a diocesan sinecure.

The problem with the management system is that we still have too many bishops who think, like too many of their priests, that 'pastoral' means being nice to everyone. It does not. A priest's primary responsibility is 'cure of souls', not making people feel good about themselves. St John Vianney nowadays would have been removed smartish for being 'confrontational'. A bishop's pastoral responsibility as successor of the apostles is to promote orthodoxy in his diocese, to ensure the liturgy is properly celebrated and that the faithful have access to the sacraments. It is not about being 'all things to all men'.

Bishop Egan said a bishop had to be "priest, prophet and king". It is no coincidence that the sexual abuse scandals peaked in the 1970s. Rembert Weakland was the very model of the 'spirit of Vatican II' prelate. When he turned out to be not only a sodomite but a crook, did the liberals disown him? Not a bit.

Anonymous @ 9:48, your comments are surprisingly sexist and elitist. People should seek and be assigned work that is actually helpful and empowering. Removing a useless job is not a reflection on the individual affected unless the person has no other worth than as a placeholder.