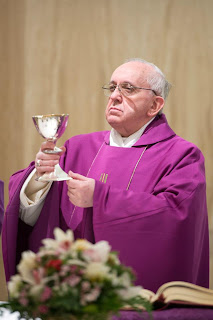 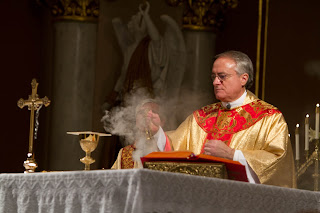 Yesterday as I visited a parishioner in the hospital who is having open heart surgery today, so please say a special prayer for him, he told me that he thought that I resembled Pope Francis because I am half Italian. Personally, I don't see it! But it was a kind of "Twilight Zone" moment for me because I've been fantasizing the following:

Pope Francis parents are both Italian and departed Italy around 1922 to escape the rise of Fascism in Italy along with Mussolini. They immigrated to Argentina which has a large Italian population.

About a month before my mother died, she reminded both my sister and me that her father, Raffaello Sainati had gone to work in Argentina in the carpenter trade. Now I don't know when this was. My mother is the youngest of 10 children and she was born in 1919. He could have worked there before she was born or any of the children or in the 1920's.

I suspect, but have no concrete evidence, that he could have had Italian relatives in Argentina either on his mother's side and I don't know her maiden name but could it be Bergoglio? Or on his father side, which his ancestry is the French Island of Corsica of the coast off Livorno.

I wish I knew! How cool would that be if I was related to the Bergoglio's or his mother's side of the family!
Posted by Fr. Allan J. McDonald at Friday, March 22, 2013

Actually, Father, I do see the resemblance, now that you mention it!

I also would say you kind of resemble David Strathairn...

There are plenty of family tree websites that could look up your heritage and confirm if you are related or not.

Your vestments are better.

FrAJM, you are a hoot!

From that angle, you look like the guy that played in The Man From U.N.C.L.E.

It is said about Argentinians that they are Italians who speak Spanish and think they're English.

I could be described that way too, I'm half Italian who wished he knew Spanish better and loves the English since my father is Canadian! My father warned us children when we were small, when we visited our relatives in Nova Scotia not to mock the queen as our relatives there might be insulted by American humor in this regard.

Do you think Fr. McDonald ever gets tired of being told he looks like Robert Vaughn?

Father, I appreciate your sentiments about the English. If you will indulge a friendly fraternal correction -- when we refer to Her Majesty, we might want to use upper case; thus “Queen.” Of course, we don’t want to lose our heads over such matters. =)

And Anonymous, no, I don’t think he does. I think he enjoys every minute of it. Next time you see him, ask him to show you his communicator pen. The real question, of course, is whether Robert Vaughn ever gets tired of being told he looks like Father McDonald. =)

I think pic number one looks more like Peter Sellers, actually. And Illya Kuryakin would not be amused....