I SAW IT HAPPEN LIVE AS I EXERCISED THIS MORNING AND WATCHED CNN, NOT EVEN THE REPORTERS SAW IT OR COMMENTED ON IT UNTIL LATER, ALTHOUGH MY HEART SKIPPED A BEAT! 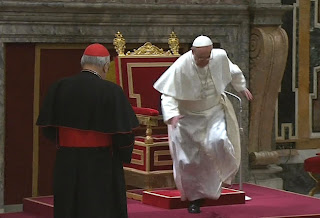 VATICAN CITY (AP) — Pope Francis paid a heartfelt tribute Friday to his predecessor Benedict XVI, saying his faith and teaching had "enriched and invigorated" the Catholic Church and would remain its spiritual patrimony forever.

Francis offered the respects during an audience with the cardinals who elected him to succeed Benedict, whose resignation set in motion the extraordinary conclave that brought the first prelate from the New World and first Jesuit to the papacy.

Francis, 76, tripped and stumbled when he greeted the dean of the College of Cardinals, Cardinal Angelo Sodano, at the start of the audience, but he recovered immediately.

Speaking at times off the cuff, Francis said Benedict had "lit a flame in the depths of our hearts that will continue to burn because it is fueled by his prayers that will support the church on its missionary path."

"In these years of his pontificate, he enriched and invigorated the church with his magisterium, his goodness, guide and faith," Francis said. Pausing for effect, he added: "His humility and his gentleness."

Francis has said he wants to visit Benedict at the papal residence in Castel Gandolfo where he has been living since Feb. 28, when he became the first pope in 600 years to resign. No date has been set for the visit. Francis is due to be installed as pope on Tuesday.

The relationship between the two pontiffs has been the subject of intense speculation given the novelty of soon having a retired and reigning pope living side by side. Some analysts have expressed concern about the influence Benedict and his loyalists might wield over the new pontificate, or worse how certain factions in the church might try to undermine Francis' authority by continuing to use Benedict as their reference point.

The presence of Benedict's closest aide, Archbishop Georg Gaenswein, at all of Francis' inaugural events has confirmed some crossover; Gaenswein is also the head of the papal household, meaning he has an important role to play in the transition and Francis' day-to-day schedule.

In fact, on Friday, Gaenswein accompanied Francis to the papal apartment in the Apostolic Palace, which has been sealed since Feb. 28. The seals were broken, Francis took the keys and opened the door, and Gaenswein hurried in to turn on the lights.

During Friday's audience, cardinals lined up and warmly greeted Francis, exchanging physical embraces with the new pope. U.S. Cardinal Timothy Dolan grasped Frances' shoulder as he chatted. Most if not all the cardinals then went to chat with Gaenswein, perhaps to inquire about Benedict.

On the first day of his pontificate, Francis's personal and liturgical style couldn't have come off as more different than that of Benedict: He went to his hotel to pick up his luggage, greet the staff and pay the bill, then delivered an off-the-cuff homily reminding his cardinals of the need to make the church strong.

The very pastoral acts were typical Francis. Benedict, while similarly humble and gentle, spent 30 years inside the Vatican, first as its doctrine chief and then as pope, where his homilies were dense theological treatises and his Masses were formal affairs in the pre-Vatican II style.

In his remarks Friday to cardinals, Francis noted that a good half of the men in the room were elderly, and he urged them to share the wisdom of their years with the young.

Whew! When I saw the photo, my first thought was that the Pope is really an Irishman...LOL!

For those of us who are worried about the state of liturgy, there's one very good thing about Francis and Benedict being next-door neighbors: My guess that Francis would consider a revocation/disavowal of Summorum Pontificum or any similar action a slap in Benedict's face (which it would be). Thus, while he might not take further steps to fix the liturgy, I don't think that circumstance will allow him to undo what Benedict has done.

At least I hope that's the case.

I guess because it's Friday, something struck me this morning. There has been much talk since this pope's election about how simple, humble and austere his lifestyle his.

There is another word that describes the action of shunning comforts and luxuries when they are easily available: Penance.

When the children of Fatima saw the angel before the apparition of the Blessed Mother, he spoke three words, "Penance, Penance, Penance!" We seem to live in a period where it is easy for Catholics to forget our call to penance, especially here in the Protestant south, where we are immersed in a culture that finds voluntary penance puzzling.

I think this pope is sending us all a very clear message.

Plus, Anonymous 5, so much of what Francis has spoken of already conveys a good complement to what Benedict XVI has taught us. Francis has already said pretty clearly that the Church, without professing Christ Crucified, becomes merely a compassionate NGO (or words to that effect). A beautiful liturgy is the outward expression of the sacrifice of Calvary that Francis reminds us is crucial. A self-centered liturgy that worships How Wonderful We Are is the very opposite of being conformed to Christ Crucified.

Interestingly enough, much of the secular press has been harping on about how humble Francis is while pointing to his simpler liturgical style, to try to falsely pit him against Benedict XVI, and to try to falsely pit social justice against doctrinal orthodoxy. That is such nonsense (it's also incoherent, and that's putting it charitably). For someone to be truly humble, they must first know Whom they humble themselves before. Both in their different approaches, I think Benedict and Francis get this.

There is a wonderful opportunity for continuity between the last three papacies, at the very least: namely, the work of John Paul II and Benedict XVI in articulating clearly what the Church has to offer in abundance, and the willingness of Francis to take what they've articulated to the most marginalized members of society. It's actually an illustration of how the Mass works, and how it's supposed to work within us: inner renewal is needed, and then it is sent forth.

If "actions speak louder than words," that much is so clear in the liturgy at the heart of the Church. By the way, why is it that most people who keep repeating this admonition don't seem to think that it applies to the liturgy (though it most certainly does not stay in the liturgy, but is sent forth into the world at the end of Mass)?

I talked to a Franciscan superior a few days ago, and he said there are two ways regular Popes can exercise penance in their Petrine Ministries.

One is to disavow themselves of the traditional aspects of non-liturgical clothing.

The other is to wear everything a secular Pope would normally wear, thereby being a penance for himself. John XXIII, a Third Order Franciscan, took this route, but wore a hairshirt under his cassock.

I can't decide if Pope Francis is engaged in the Harlem Shuffle or Gangnam Style...