THE FUTURE OF THE LITURGY; IT'S UP IN THE AIR? 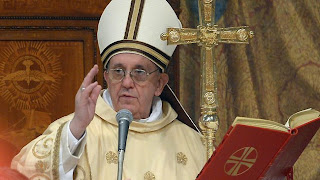 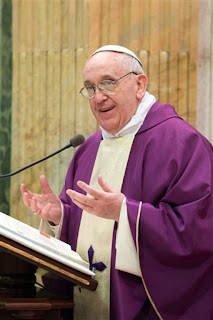 This pope isn't a liturgist and his simplicity could be read as sloppiness or idiosyncratic. I will give him the benefit of the doubt in cases of taste and protocol.

But what I have seen so far in terms of the Mass, I find him very spiritual when praying and his spiritual orientation is towards the East even if not physically, but so was Pope Benedict whose Masses were 99.9% facing the congregation. There were only a few, counted on one hand, that were actually ad orientem and these were in the Sistine Chapel for the Solemnity of the Baptism of the Lord and in the Pauline Chapel two or three times. That's it!

The chasuble that the Holy Father used for the Sistine Chapel, Pope Benedict had also worn along the way. The one used at the parish church of Santa Anna looked like a typical parish church chasuble.

My practice ever since I have been ordained is not to buy personal vestments. I have about five, one that I was ordained in and quite simple, in fact the one Pope Francis wore on Sunday looks Baroque compared to it, three of which were made for the three of us ordained in 1980 at our Cathedral and identical to one another. The other is the vestment I used for my first Mass the next day made by my mom. It is typical of the Sulpician look at that time. It is off-white, with an exterior stole and no ornamentation whatsoever. Their is a simple trim around the edge of the chasuble and tassels on the outside stole, but other than than, completely plain.

the others were given to me over the years.

Back to the pope and the Mass. I have always loved the Ordinary Form of the Mass and never expected that I would be celebrating the Extraordinary Form. I accept the allowance of the Extraordinary Form as a gift for Pope Benedict and it is wonderful to have two forms of the one Roman Rite. It has helped me to appreciate the Ordinary Form and understand from whence it came. My way of celebrating the Ordinary Form of the Mass has evolved over the last 33 years. Early on, I improvised the spoken parts of the Mass at times, and took gimmickry to a new level at times. But since the last 80's I've been far more "do the red and say the black" and have come to chant much, much more so much so that in the last 4 years I have two completely chanted Mass every Sunday.

But let's talk about the Ordinary Form because that is the Mass that 99 % of Catholics experience and a good percentage of them love.

If priests and congregations would celebrate it as Pope Francis and the two congregations thus far I have seen him with, that would be wonderful. Care was taken in both situations. The Holy Father elevates the Host and the Chalice much longer than his predecessors. At both Masses, these were incensed at the elevations.

At both Masses, apart from the concelebrants, the deacons knelt to receive Holy Communion from the Holy Father and by way of intinction as the MC held the chalice. That is definitely the way to go, not even the concelebrants at any papal Masses, including with Pope Franics, commune the Host with him, he does it alone. Rather they wait until after the Holy Father has received and then take the Host from the altar and intinct it into the Precious Blood!

Those who do not concelebrate have received only the Host and kneeling at both Masses with Pope Francis.

The music in the Sistine Chapel and for the Installation Mass on Tuesday has been splendid and the Propers are chanted. The installation Mass music should be exquisite. The Holy Father evidently can't sing and won't even try, so I hope and pray that he will keep the status quo that Pope Benedict fostered.

1. The Chanting of the Propers and chant of our tradition at papal Masses

2. Kneeling for Holy Communion and when the Precious Blood is offered by way of intinction!

3. Benedictine (which I hope becomes named the Franciscan) altar arrangement even if modified, but with the crucifix dead centered for the celebrant

All other decisions should be local, in terms of vesture and amount of ceremony, toward the congregation or ad orientem.

Tuesday's installation Mass will give us more cues. Will the altar have the Benedictine altar arrangement? Will the Holy Father distribute Holy Communion to laity (he did not at the parish Mass on Sunday which I find interesting that there has been no comment about that on other blogs!) And if Pope Francis distributes Holy Communion to laity, will the laity kneel to receive? Oh the anticipation!

One correction... the Pope was a member of http://en.wikipedia.org/wiki/Congregation_for_Divine_Worship_and_the_Discipline_of_the_Sacraments as a Cardinal, that makes him a very aware and capable liturgist!!!

Father, you need to understand... we were "spoiled" by Pope Benedict (and Don Guido). It's going to take some time. Speaking for myself, even with all the improvements the Holy Father and Don Guido made concerning the OF, none have really tricked down to our local parish level. The masses I attend in my local parish is still identical (except for the new translation) to the masses celebrated back in the 1990s. So, for me, watching a Pope Benedcit mass on TV was something to look foreward to, a change to experience something we don't get in the local parishes. Now with Francis, his masses will look no different to our local parish ones. Is it bad? No. Is it disappointing? Somewhat. So we post and let off some steam. Thank God all we have to complain about is the style of mass, and not that Francis is changing doctrine and dogma. But what kind of makes it worse is when some, like yourself, who may be a little overprotective of the new Holy Father, start preaching to us to calm down, instead of just letting us blow off some steam, get it out of our systems, then we all can move on.

If we could see a filmed Mass of St. Pius X, XI, XII or Pope John XXIII, would we see any difference?

Why can we not have one consistent manner of celebration?

"All change is bad" Fr. Faber

The re-introduction of the EF and the formalizing and standardizing the OF symbolize a return to traditional Catholic identity. Doctrinal and moral conservatism are certainly to be applauded, but that isn't enough. Worship recapitulates doctrine; Liturgy embodies theology. Hell, Calvinists are doctrinally conservative and more Baptists vote pro-life than Catholics. If Benedict's reforms are allowed to die on the vine, the Catholic Church will go the way of Protestantism.

I think the simple fact of the matter is that there is growing fear of our new pope among those who invested much time and effort into promoting the "reform of the reform". Whether or not the fear is justified, the pope is doing things that effectively prompt fear among this segment of his sheep, especially among this segment of the clergy. We should be rejoicing that we have a new pope, but instead, we are in a state of fear.

"I try to buy vestments for the parish and try to buy ones that will match the building in which they will be used."

Father,
On one level I agree with you. I agree with you that vestments are not about the personality of the individual celebrating priest but are part of the liturgy which he himself does not own. As Pope Emeritus Benedict has written, we do not make or do liturgy--it is given to us (it is received) and should be in continuity with the past (not deliberately changed to fit some current perception about what we think we need now).

On another level, I am having a problem with buying vestments to fit the architecture of each individual church building. What if you live (as I do) where there is only one Catholic Church in town and the next closest is at least 35 miles away? Add to that that I don't live anywhere near a large beautiful old pre-conciliar Church building such as the one where you are now assigned (too far from Macon, Savannah, or Augusta) and most or all of the smaller pre-conciliar churches have been replaced over the last 30 years?

I have to try and practice my faith in spite of the kind of church building where I am attending Mass (a building built during the episcopate of a bishop who was in office from the early 1970's to the mid 90's). My father was on that building committee in the early 1980's and the best they could do at the time was to make sure we got a rectangular building rather than a "church in the round" and get us a choir loft by subterfuge.

Until we can afford and justify building another church (not in my lifetime, I expect) must we be nailed down and cemented in by bad architecture of a certain period and by geographical isolation to a prolongation of ugly or boringly plain "modern" vestments and externals to match a then "modern" church building? At least, thank God, our current pastor doesn't let the architecture keep him from wearing more traditional looking vestments!

The Pope was celebrating Mass in an old parish church building in Rome. He could've worn something more traditional (y-orphrey and brocade) to match that building. If we want to raise people's minds and hearts out of the worldly mire of the mundane and banal then more beauty and more picking up at where we were right before the Council must be justified.

Guido Marini and I were born in the same decade (60's) and I guess I see it more like he does. Pope Francis, who may prove to be a super Pope, is almost exactly the same age my dad would be if he were still alive (born in late 1936). My dad liked the more traditional-looking externals in the Mass and sometimes would tease those (such as unhabited nuns) whom, he sensed, didn't like them.

It appears as if the mozzetta may be back! One was rush ordered today: http://honresp-catholicblog.blogspot.com/2013/03/tomorrows-papal-mass-good-news-from.html

Father, I don't know much about your mother except for what you've posted on this blog, and she sounds like she was a wonderful woman.

But the fact that she made you vestments makes her well and truly awesome, and downright cool!