I WONDER IF THIS MEANS I AM RIGHT ON POPE PIUS XIII OR THE MUSICAL CHAIRS SELECTION PROCESS? TIME WILL TELL 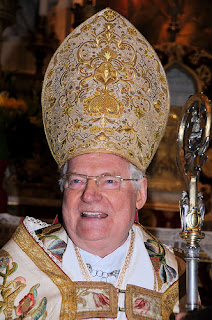 Cardinal Scola works on an election coup
It is an election, entwined with legends: Before the conclave in which the new pope is determined, the tension rises in the Vatican. An Italian cardinal is already a big favorite.

The adoption of silence for the cardinals gathered in Rome has slowed the flow of information from the pre-Conclave significantly. Yet more news leaked out and ignited the particular creativity of the Italian media. According to the findings of the newspaper "La Repubblica" the Milan Cardinal Angelo Scola (71) already has 40 votes behind him - a statement which is not justified in detail.

The renowned theologian would therefore take the pole position in the camp of moderate reform-minded cardinals. And he would therefore oppose the conservative forces of the Roman Curia, who want to leave the structures at the top of the Church essentially untouched.

The extensive discussion in the General Congregations, and the long wait for the decision on a Conclave date suggest a high need for discussions among the Cardinals from the great dioceses of the world church. Apparently they have expressed their displeasure at the repeated breakdowns at the top of the Curia - from "Vatileaks" to the Williamson affair - which have not been put behind them by the Curia.

The relationship between the Vatican and local churches is the issue, the Vatican spokesman Federico Lombardi said regularly at his daily press briefing. The discussions are on a broad range of subjects- ecumenism, interreligious dialogue, social justice, bioethics, collegiality, but also the role of women in the church.

Demands for reform, Vatican experts see coming especially on the part of Western and Central Europe, but also from the U.S. bishops and many Latin Americans. Favorites from this camp include not only Scola but also the pastors of Boston and New York, Timothy Dolan (63) and Sean O'Malley (68) , as well as the Vienna Cardinal Christoph Schoenborn (68).

And German Cardinal Walter Kasper (80), whose advice as the oldest Papal elector has been especially sought, very significantly has called in past weeks for more transparency and changes at the top of the Vatican.

As a representative of the "Roman group", the Italian media cited especially the Italian-Argentine Cardinal Leonardo Sandri (69). Malcolm Ranjith (65) from Sri Lanka has been included within a team, which find their support from Cardinal Angelo Sodano, Dean (85) and his former colleagues Giovanni Battista Re (79) or Giovanni Lajolo.

As the front man of the Roman group, "La Repubblica" cited the Brazilian Cardinal Odilo Peter Scherer (63): If an outsider is chosen to head the church, the likely the number two of the church hierarchy, the Cardinal Secretary of State, would be with a high probability an Italian with Curia experience.For which Sandri could come into consideration - or maybe the previous substitute of the Secretariat of State, Archbishop Angelo Becciu Curia (64), or the former deputy Foreign Minister Archbishop Pietro Parolin (58), who is currently Nuncio to Venezuela.

It is questionable, however, whether Scherer, who is conservative on theological issues should actually be assigned to the Curial faction. Because also in the assertive Archbishop of Sao Paulo, who is a strong leader, observers see the interest in a renewal of the Curial structures.

Among others are:
Petrus (Peter) – e.g. Peter Turkson and Peter Erdo

No it's not, John is Ioannes.

FrAJM, I know you are joking, sort of, about Italian Popes. But I bet they pick someone not Italian, probably not even European, to reflect concerns for the Church worldwide. Not in a patronising way, but more to get fresh blood and probably to clean out a lot of the Vatican bureaucracy.

A) Come on, Father Ignotus. We know you don't buy the St. Malachy prophecies for a minute.

B) The names seem to have more of a symbolic importance. For instance, "Peter the Roman" could signify a number of things. The United States could be considered the modern version of the Roman Empire, as we have become too big to maintain ourselves and are awash in moral decay, just as Rome was. An American like, Burke, could fit the bill, even if he took a different name.

I don't think any of the current group of candidates would have the chutzpah to take the name "Peter" as pope.

While I share your enthusiasm for the possible election of Angelo Cdl. Scola, something tells me that he will not choose Pius XIII as his regnal name. One would hope that a cardinal who has dedicated much of his later years to interfaith reconciliation would not needlessly inflame Jewish-Catholic relations by styling himself, at least implicitly, after Pius XII. I understand that Pius XII's reign is fraught with grave disagreements which I do not wish to stoke. Still, I contend that Pius XIII is an unwise choice which I hope our next pontiff will not select.

How about Martin VI, after Martin V who reconciled the Western Schism? Perhaps the next pontiff should choose a name which signals a willingness for cooperation, not emnity.

For future reference, "John" is:

"Jean" in France
"Gino" in Italy
"Juan" in Spain
"Joao" in Portugal
"Ivan" in Russia
"Ian" in Scotland, etc.

Jordan, actually at this point I wouldn't mind Martin VI; would love Gregory but I think Benedict XVII would be best, to complete what he began in terms of reform in continuity and re-evangelizing Europe and the rest of the world.

And for what it's worth Lefebvre means Smith, Ferrari in Italian.

I just don't feel it for Scola. If he does get elected (and for full disclosure, I am praying for the conclave to elect either Cardinal Ranjith - my non-Italian pick - or Cardinal Bagnasco - my Italian pick), I feat he will be a bland, uninspiring pope, where nothing will really happen, one direction or the other, during his papacy. Spiritually, it'll be like a 10 or 15 year freeze frame. I just don't get why everyone seems to be pointing to him to be the guy. Maybe someone could explain it to me? I think Ranjith or Bagnasco would be so much better for the Church.

Hal,
I totally agree with you on Scola as opposed to Ranjith or Bagnasco. I would say we may well need to get ready for the possibility of that "freeze frame," at least from a liturgical standpoint. While there's still time, I continue to pray for our favorites.

Um, I don't think Scola would be at all opposed to fanons, dalmatics, crucifixes and candles...

If Cardinal Ranjith is elected, the proto-deacon will have to come up with the Latin for Malcolm. Suggestions, anybody?

ytc,
I agree that Card. Scola is often depicted wearing nice vestments which may indicate that he is favorable to the restoration of more pre-conciliar traditions back into the liturgy (ad orientem, banning Communion in the hand, etc.). It's just that I haven't had the opportunity to read of anything concrete that reassures me that Scola holds to these attitudes. If you know of anything please point me to it so I can be reassured on this point. Otherwise, I see him as more of a John Paul II type (strong on doctrine and morals--which is great but letting liturgy continue pretty much as it has been in most places most of the time).

Ranjith, on the other hand, I will always remember for his comment that bishops who obstruct the implementation of Summorum Pontificum are allowing themselves to become "instruments of the devil" and for his revocation of Communion in the hand in his Archdiocese. These things may work against him in the conclave with more moderately minded cardinals but they won my undying admiration.

The Church needs a Ranjith, Burke or Bagnasco. Only a strong Traditionalist has any hope of staving off the rot. If they select a Scola (while indeed a solid but safe choice) they are signally their decision to continue the slide into irrelevancy.

In addition to Ranjith, Bagnasco, and Burke, I also like Piacenza and Pell. Lord God, as the Cardinals go into the conclave, may they elect the man you will.