THE PONTIFEX MAXIMUS EMERITUS AND THE CHURCH, THE LITURGY AND THE CULT OF THE PERSONALITY

BREAKING NEWS! Most recent photo of Pontifex Maximus Emeritus on a stroll in the town of Castelgondolfo! What retirement can do for you too! 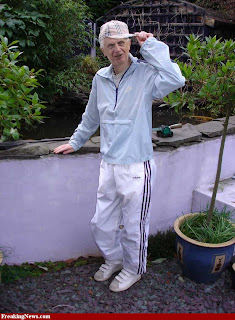 So much of the wrong implementation of Vatican II by others after Vatican II focused on the things of this world. How bishops interact with each other and structures to bring that about, how bishops interact with his priests and structures to bring that about, how priests interact with their parishioners and structures to bring that about. The popular understanding of Vatican II is that it "committeefied" the Church. Committees became more important than Christ, what we were doing, how were we during it and no matter what, if a committee decided it, the process had to be good even if the results led to the deconstruction of the a parish, a diocese, a religious order or whatever. The process of committees and the fact there were committees became the new god of Catholicism of the reformers who neglected God!

Then on top of all that, the Liturgy had to symbolize the ecclesiology of committees, how people function in the Church and the differing roles that each have. The liturgy, rather than being sacrifice and thus worship, became what these people at this parish were doing at this time to build community. It makes me what to puke!

It is that horizontal circle of navel gazing and looking inward to who we are as a great people rather than looking to the Lord and finding our greatness in Him alone.

Thus this has ramifications for the Liturgy. The priest and the congregation are there to receive from God what God gives us and what He gives us is our ability to praise and thank Him and He does so through the Church and her liturgy. We don't construct the liturgy to fit our needs we celebrate the liturgy as it is given to us.

For this reason, the Pontifex Maximus Emeritus preferred the Mass to be celebrated ad orientem or when facing the congregation, that he be hidden behind a rood screen of candles and crucifix. I prefer ad orientem myself.

The entire papacy of His Holiness, Benedict XVI, Pontifex Maximus Emeritus has been to point to Christ and so has his resignation. On Monday before Ash Wednesday he told the world. Ash Wednesday, the most penitential day of the year, he celebrated his last Mass, wearing violet, with ashes on his head.

His last Angelus was about the Gospel, not him. And his last papal audience still directed people to Christ and not himself.

And his final view that the world will have of him, unless he surprises us again, or the cardinals elect him again, is his simple speech and Good night.

Understated, not about himself, no narcissism.

The Pope is a Christocentric theologian...always has been, even in his early academic meanderings. His writings reflect his steady journey to a solid, transcendence based, Christological theology and ecclesiology. If I read him right, the only prot theologian he took seriously was Karl Barth (my former Calvinist hero), another Christocentric theologian like himself. Benedict understood how seemingly abstruse and "academic" theological formulations are reflected in liturgy and how they affect the average Catholic in very real and immediate ways. I believe this led to his disillusionment with Vat II and its secularist/humanist implications. His popular writings are wonderful because, though steeped in his rich and deep academic background, they are easy for any devout Catholic to read and understand...mostly. He also gets in some zingers at lib theologians.

I know of a moderately sized Catholic parish--somewhat smaller than St. Joseph's Macon--that has a liturgy committee with TWENTY-ONE members.

Does this fact alone tell you something about the parish's view of the liturgy? For instance, whether it's something they construct or something the celebrate as received.

Incidentally, I know of no TLM community that has a liturgy committee at all. What would it do? (I think of a traditional priest to whom the diocese offered a permanent deacon. The priest wondered what he could do with him. Finally it occurred that he could have him cut the grass every Saturday.)

Henry, that is hilarious! Maybe they could put all such "liturgy committees" to work in the yard...LOL!