Now, keep in mind that there is a category of Irish, known as the "black Irish." Sister Bernadette Quinlan, my former pastoral assistant at the Church of the Most Holy Trinity in Augusta told me about these Irish and that she is considered one of them because of her dark hair, darker complexion and brown eyes. So I looked up "black Irish" on my trusty internet and discovered the following:

One theory about the origin of this term focuses on an event that took place in 1588, when more than 20 ships carrying members of the Spanish Armada wrecked on the coast of Ireland. Many of the men were killed in the wrecks, and many of the survivors were put to death by Irish soldiers. A handful of the survivors fled to Scotland, but it is believed to be unlikely that any of them ever made it past the beaches of Ireland and unlikely that any of them could have made a significant genetic contribution to the people of Ireland. It is considered to be more likely that a group of Spanish soldiers who served under Irish chiefs around the same time stayed in the country long enough to father children.
African Heritage

In the 1800s, many people believed that Irish people who had dark complexions were somehow related to Africans. Africans and people who had dark features were often held in distaste and considered to be inferior. In 1862, John Beddoe, an esteemed ethnologist, published Races of Britain, in which he described people of Celtic descent as having features similar to those of African descent. The term "Black Irish" might have been derived from this viewpoint.

So, my "mentalist" abilities tied in with my clairvoyance leads me to believe that the new Pontifex Maximus who will have his Coronation Mass on Saint Patrick's Day in honor of Saint Malachy will be one of two people: 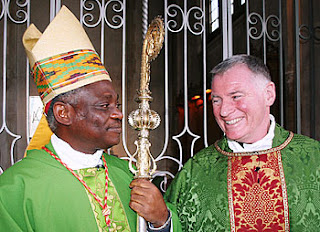 Here is the good Cardinal Peter Turkson, and you can't get any more Black Irish than he, wearing his emerald Island green vestments next to an Irishman, Canon James Cronin. But what is really bizarre, is that this black Irishman is named Peter and the last pope will be named Peter. So this of course makes him my #1 clairvoyant choice for the last pope of Saint Malachy. 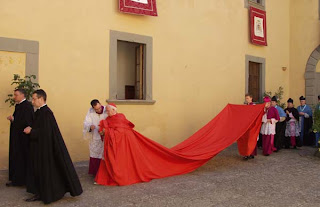 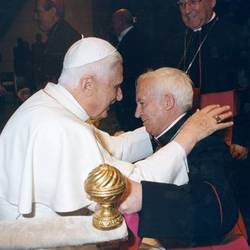 Now you can't get anymore Spanish than he, Cardinal Antonio Cañizares Llovera. Obviously he has the connection to Saint Malachy and the Black Irish.

Now compare the features of Saint Malachy below and tell me if you detect any "Black Irish" in him! 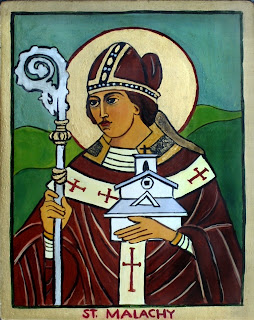 Father, did you see the recent Church Militant TV Vortex episode where Michael Voris scolds all Catholics for even DISCUSSING the alleged prophecies of St. Malachi and all the other speculations about the end times and final popes.

On one hand, I can see his point, since Jesus told us that NO ONE knew the day or the hour. The problem is, a lot of us don't need to know the day or the hour, but we want to be prepared and we want to be vigilant. When we read the prophecies of Our Lady of Akita, predicting apocalyptic cataclysmic events and find that the Holy Father Emeritus (HFE) had commented as a cardinal that the prophecy is essentially the same as the unpublished portions of the 3rd Secret of Fatima, it's kind of hard to sit still.

You're probably just having some fun with us here, and that's OK, but it's very hard not to think about the possibility that the next pontiff will be the one who leads us into the end of all endings.

If Turkson were to be elected, I think it would be a disaster for the Church.

He supports condom use as "disease control" (not birth control). Once that pandora's box is open... well, just look at how the Anglican Church fell. MOst of the Arfican Cardinal support condom use. Combine that with the fact the Church in Africa is very young (younger than the Church in America), I doubt very much we will have a pope from Africa. I'll go on record as saying there will be a pope from America before there will be a pope from Africa. I also think the Latin Americans have shut themselves out this time around because of their support for "liberation theology". My guess is the new pope will be from Europe, Asia, or Australia.

It amazes me how everyone is taking it for granted we will have a new Pope installed by Holy Week. Unlike conclave 2005, where the media picked Cardinal Arinze to be pope, while most faithful and practicing Catholics knew it could only be Cardinal Ratzinger, there is no clear "front-runner". There are 5 to 8 leaders on roughly equal footing. There will not be a first or second or even third ballot winner. Since the "simple majority" rule has (thankfully) been eliminated, this leads me to think the conclave will last at a minimum of 6 weeks, and perhaps as long as 3 months. the only way I see getting a fast track winner is if the Cardinals just hand it over very quickly to Cardinal Scola, without thinking or praying on the long term benefit of the Church, but rather primary in their thoughts is "we gotta get someone in in time for Holy Week -- Scola or Bertone." Scola will get it because of Bertone's involvement in the Vatileaks scandal, although Scola was part of it too... so again, the Cardinals would not be thinking of the long term benefit of the Church. They would be rushing just to get a Pope in for Holy Week. So I hope and pray the conclave goes on for 4 or 6 weeks or longer, so we get the right Pope who will benefit the Church in the long run.