SO YOU WANT TO KNOW MORE ABOUT POPE FRANCIS? WELL THIS VIDEO CERTAINLY GIVES YOU PROFOUND INSIGHTS INTO HIS CATHOLIC FAITH WHICH IS OURS!

I think you can see his agenda in this 15 minute interview only a few months ago as Cardinal Bergoglio. I am quite impressed with how he teaches and his great insights. He understands the "Smoke of Satan" and the resulting "rampant idolatry, gnostic Paganism, consumerism." Wasting money on non-necessities, like the amount spent on pets and cosmetics/cosmotology, and the poor are down the list if not non existent!


And CLICK HERE FOR SPECTACULAR PHOTOS OF TODAY'S INSTALLATION MASS, AND NICE PHOTOS OF THE ALB OF THE POPE, ALMOST LACE LIKE!

A happy alb and a happy Monsignor Marini (I pray for him and pray he isn't dumped, he proved his stuff today! As a former Master of Ceremonies, I know what he must be experiencing!) 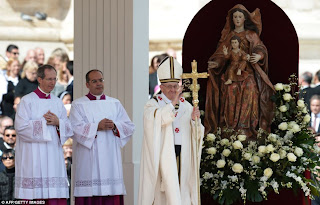 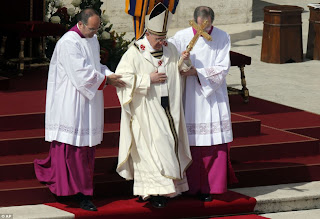 And the FRANCISCAN ALTAR ARRANGEMENT! 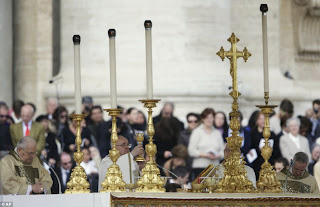 Hmm . . . About that Franciscan vs Benedictine altar arrangement . . . Scroll down to the last photo in that Daily Mail "spectacular photos" thread you mentioned.

Looks like the altar was set up in standard Benedictine arrangement, then at the last moment the candles were scrunched into those 45-deg corner arrangements.

Most of these changes may be small and seem minor taken one at a time. But they are beginning to add up to a major backward shift in the style of liturgy. One that gives great hope and new life to those progressive "spirit of Vatican II" types you often refer to, giving them confidence that the reform-of-the-reform they so dreaded is now a dead letter.

I wonder how long a pretty face on all this can be pretended.

I think defintely the MC has been told to make sure the candles are angled, this was also the case with the Sistine Chapel Mass, the Mass on Sunday at the parish Church and now with the Installation Mass. I suspect it was easier to insert the candles in the candlesticks with them straight across and then angle the candles.

The crucifix is dead center though at all his Masses thus far and even in the video above, when he was a cardinal at a Mass, there is the Benedictine arrangement.

"I suspect it was easier to insert the candles in the candlesticks with them straight across and then angle the candles."

Really stretching for that pretty face? (I understand that those candlesticks weigh 150 lb each. Easier to move 900 lbs around than to insert 6 candlesticks? Surely you jest.)

The good will for Pope Francis that we all (here) share is one thing, but a blind eye for the obvious is another.

Henry, I'm not sure of what your point is. I think the Holy Father wants them angled and those who put them there didn't do and and were and were made to do it after one of the MC's noticed it wasn't done as they were told to have it.

Given the above interview a mere couple of months ago with then-Cardinal Bergoglio and what he has to say about consumerism and spending all that money unnecessarily on pets and cosmetics/cosmetology, I have to point out the following regarding liberal dissenters who want to fawn over Francis in order to bash Benedict: so Pope Benedict-- unlike Francis-- never mentioned the poor?

For most (although not all) of Benedict's Masses in St Peter's the candles were echeloned. I pointed this out on Fr Z's blog over a year ago and no-one there seemed to have an answer. However, for the last installation Mass eight years ago there were no candles or cross on the altar.

This morning I fully expected to see a bare altar and the pontiff emerging carrying the Paul VI staff. The music was better than last time. If I want decent liturgy and music I wouldn't go near St Peter's anyway - the London Oratory is only an hour away, they had High Mass this evening, and they have always been ten times better than anywhere in Rome.

I hate these open-air Masses; all the flag-waving - I thought the Pope said something to the effect that carnival time was over? - and only the efforts of the gendarmerie stop some idiots bringing in giant puppets. No wonder Francis wanted to get it over with as quickly as possible.