IS THIS ANOTHER HOAX, MORE DISINFORMATION OR TRUE? IF TRUE, MAYBE SOMEONE HAS GOTTEN TO POPE FRANCIS AND TOLD HIM THE PROGRESSIVES ARE TRYING TO DERAIL HIS PAPACY WITH THE TRADITIONALISTS? IF TRUE, BE HAPPY, NOT SAD???? 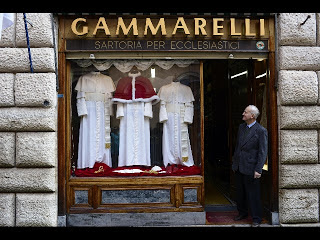 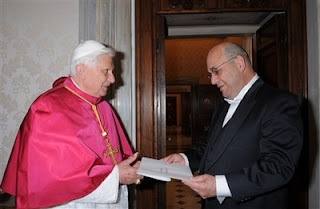 The Italian Blog, Messainlatino says the mozzetta is back again? True or false? I don't know! Press HERE to read the Italian version.

The heading is in English: Mozzetta back again. A nice picture of Gammarelli’s shop window, as above. Here is my translation, rather rushed and a bit stilted:

A red mozzetta has just been sent to the Vatican, ordered in great haste only this morning, from the famous ecclesiastical tailors, Gammarelli of Rome.

Tomorrow is the date set for the Mass to mark the “beginning of the Petrine ministry of the Bishop of Rome” and in all likelihood (and it is only in this sense that the haste with which the ordinal was prepared can be understood) the one who is being inaugurated will use it, it is being kept for the ceremony in which he will receive the vows of obedience of a representative group of the cardinals.

We are getting excited over very little, some people will think, but on a more substantial level, it comforts us that Mgr Guido Marini has been confirmed in his functions for the ceremony of “inauguration”, coordinating the Franciscan friars of La Verna who have been called up for service at the altar.

The Mass, preceded by the Laudes Regiae, will be in Latin, except for the homily (in Italian), the readings, the responsorial psalm and the prayers of the faithful, all in assorted languages; while the Gospel will be chanted entirely in Greek rather than in the two sacred languages, as would be the custom in the more solemn papal ceremonies; this seems to spring from a desire to shorten the length of the ceremony. With the same intention of synthesis, the offertory procession will be abolished (and this is good, considering what masquerades that rite has given rise to in the past).

During the offertory there will be performed a motet by Palestrina for four voices, written, appropriately, for the coronation of Popes: Tu es pastor ovium.

Finally, the chanting of the Te Deum will close the liturgical part of the proceedings.

MY COMMENT: There is a huge number of traditional minded Catholics who have a feeling of dread about this pope and his Argentinian view of the world. He's in Rome now and maybe he'll start doing things, at least the good things, as the Romans do?

A mozetta is a small thing but the story as a whole (as well as certain aspects of yesterday's Mass) is causing me to feel more hopeful of continuity with Benedict's papacy.

I hope we see it.

I just pray that if Pope Francis really intends to focus on the poor or at least direct more attention from the universal Church to that area that he will leave the liturgy and ceremony in a very capable Msgr. Marini's hands. He is quite respected and has done very good things in the past that in this media age has linked Papal liturgies to those which we learn about as children in history books. The Pope is recognized as such. Marini is I suppose a liturgy expert and if Pope Francis does not have a liturgical backround this would be a good thing to do. I believe that a redirected focus on the poor, although let's see how many of the Progressives and liberal media members pull out their checkbooks who did not before, and the use of good liturgy and ritual elements can and should be balanced with one another. Continuing the familiar practices of the previous Pontificate and at the same time redirecting pastoral focus can be done. This is a truly great and humble opportunity. I think everyone under the large umbrella of the Church would be pleased to see a return to Tradition AND a renewed focus on the poor, bringing both together.

When Pope Benedict brought back the mozetta and was seen wearing it so often it gave me a sense of comfort. He looked the way a pope was supposed to look.

Jesus said, "Suffer the little children, and forbid them not to come to me: for the kingdom of heaven is for such." We are often told that the scripture means we should approach God as a child approaches his parents.

Papa Francis: Help your children! Let us know that you aren't going to pull the rug out from under us. You don't have to convince us that you are humble. It's OK to dress like a pope and have magnificent liturgies. The glory isn't about you, it's about God!

Messa in Latino has updated their entry saying (my polished up translation): "The mozzetta was not used at the inauguration ceremony nor the following meeting with the heads of state and government. However, we can directly confirm the mozzetta's delivery on the evening of Monday, March 18. We will see in the coming days."