This photo wasn't taken Wednesday the 28th of February as I was actually wearing the liturgical color of white, but it does convey the fact that I was preaching and tickled pink about it! It was last year's Cherry Blossom Festival that coincided with Laetare Sunday. 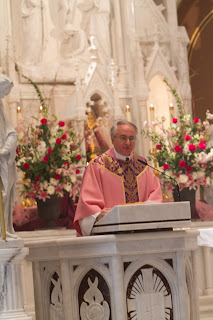 At 12 noon on February 28, 2013, Saint Joseph Church was practically full for the Mass of Thanksgiving for His Holiness, Pope Benedict XVI, Pontifex Maximus. The following is my homily for that Mass:

Introduction: In his final talk to the world at yesterday’s General audience where more than 200,000 pilgrims had come to witness history in the making, the Holy Father, Pope Benedict said the following: “I want everyone to feel the joy of being Christian. In a beautiful prayer to be recited daily in the morning says, “I adore you, my God, I love you with all my heart. I thank You for having created me, for having made me a Christian.” Yes, we are happy for the gift of faith: it is the most precious good, that no one can take from us! Let us thank God for this every day, with prayer and with a coherent Christian life. God loves us, but He also expects that we love Him!"

Topic Statement: The most fundamental truth the Holy Father teaches about the Catholic Church is that it is like a barque or a boat and that no matter what, and I quote our Holy Father, "I always knew that the Lord is in the barque, that the barque of the Church is not mine, not ours, but His - and He shall not let her sink."

1. If you listen to the voices of the world expressed by the Mass media, like CNN or the New York Times or those who have little or no faith, hope or love, you would think that the Catholic Church is some kind of merely human organization that is about to collapse after 2000 years, but the Holy Father knows that the Catholic Church is not like any organization, it is not like a retail store, such as Wal mart that can go out of business. No the Catholic Church is like our Lord, One Divine reality with two natures, human and divine and as such the gates of hell shall never prevail against her although we will experience trials and tribulations from the sins that Christians commit and the forces of the world and of Satan that are against us.

a. The Holy Father though, like us, had his moments when he wondered if the Lord was with him or if the Lord had abandoned him and the Church. Have you ever felt that way? Don’t worry, you are in good company, especially when things are not going our way and evil seems to be more powerful that goodness. But that is the deception of the evil one, of the devil. But listen to the words of our Holy Father as he expresses what so many of us sometimes feel: “I have felt like St. Peter with the Apostles in the boat on the Sea of Galilee: the Lord has given us many days of sunshine and gentle breeze, days in which the catch [of fish] has been abundant; [then] there have been times when the seas were rough and the wind against us, as in the whole history of the Church it has ever been - and the Lord seemed to sleep."

b. But the Holy Father also makes clear that the Lord is not asleep and is quite aware of our needs and that the “Barque of Saint Peter” the Church, belongs to Him and not to us! The Holy Father continues in his great farewell address of yesterday: “I also receive many letters from ordinary people who write to me simply from their heart and let me feel their affection, which is born of our being together in Christ Jesus, in the Church. These people do not write me as one might write, for example, to a prince or a great figure one does not know. They write as brothers and sisters, sons and daughters, with the sense of very affectionate family ties. Here, one can touch what the Church is – not an organization, not an association for religious or humanitarian purposes, but a living body, a community of brothers and sisters in the Body of Jesus Christ, who unites us all. To experience the Church in this way and almost be able to touch with one’s hands the power of His truth and His love, is a source of joy, in a time in which many speak of its decline.”

2. The Holy Father is courageous in closing the door on his papacy in order to allow the Lord to open a new door on a new papacy.

a. The Holy Father tells us to pray for the Cardinals who under the guidance of the Holy Spirit and the protection of our Blessed Mother, Mary Most Holy, a new pope will be elected. The first pope of the Catholic Church was St. Peter, the apostle. Since then, there have been a total of 266 popes in a continuous line of apostolic succession spanning almost 2000 years. The 266th pope is Pope Benedict XVI. We will very soon have the 267 pope who only the Lord Himself knows who it will be and what name he will call himself. This is history in the making and we are a part of it today and we should give thanks to God for being able to participate in this most dramatic point in the history of the Catholic Church.

b. [Toward the end of his homily, the Holy Father stated:] "I thank each and every one of you for the respect and understanding with which you have welcomed this important decision. I continue to accompany the Church on her way through prayer and reflection, with the dedication to the Lord and to His Bride, which I have always tried to live daily and that I would live forever. I ask you to remember me before God, and above all to pray for the Cardinals, who are called to so important a task, and for the new Successor of Peter, that the Lord might accompany him with the light and the power of His Spirit."

Conclusion: Like Saint Peter who was asked multiple times by the Lord, “Do you love?” The Holy Father has always said yes and he will continue to say yes as the [Pontifex Maximus Emeritus]. As we continue this Holy Mass, let us too say yes to the Lord and let us give thanks to God for so great a pope, Pope Benedict the Great as we listen to his final words in yesterday’s farewell speech:

Quote, “Dear friends! God guides His Church, maintains her always, and especially in difficult times. Let us never lose this vision of faith, which is the only true vision of the way of the Church and the world. In our heart, in the heart of each of you, let there be always the joyous certainty that the Lord is near, that He does not abandon us, that He is near to us and that He surrounds us with His love. Thank you!” Closed quotes.

God bless you, Father McDonald! For this, and so many other things, including willingness to celebrate the EF as well as the OF, and for your thoughts on this blog regarding how the one can inform the celebration of the other.

I really wish more priests would give homilies like this-- about sin, redemption, and salvation, yes, but equally importantly, that the Church is built on Christ. The gates of Hell will not prevail against her, because the Church is His Body. It is *His* Church, not ours, and thank God! (On a somewhat related matter, why oh why won't so many priests encourage more of the faithful to go to Confession? Particularly with today's Gospel parable about the fig tree that wasn't producing any fruit, but where the gardener offered to tend to it? By what leave do any of us presume that the Eucharist ought to work within us without our cooperating with what makes the ground of our souls fallow enough to receive it?)

The Sacraments we receive are conformed to Christ, His Death, and Resurrection. It's how He builds up His Church for His purposes, and He's with us every step of the way, until the end of time. And Pope Benedict XVI was a Pope for whom Christ was central. Everything this man said and did had Christ at the center.

I dreamt the night before last that Cardinal Burke had been elected, but woke up before it was announced what name he had taken. Unfortunately, unlike Fr Allan, I am not clairvoyant.