ARE YOU NERVOUS ABOUT THE CONCLAVE? DON'T BE, CONTINUITY IS THE THEME 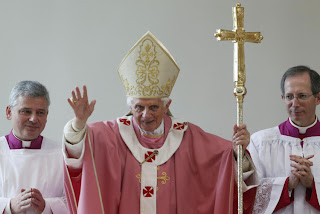 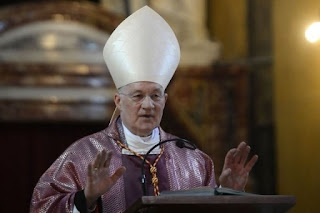 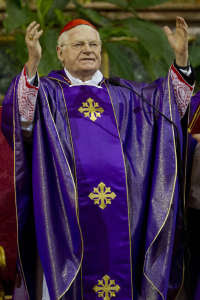 Yes, physician heal thyself. To say that I am nervous about the outcome would be an understatement. Really, I can't say that I am nervous, because as a happy ultra-montantist, I will be happy with any pope and will follow him obediently in the areas of faith, morals and canon law. That's the way I am, I am a Catholic, Roman Catholic that is.

But common sense in addition to the supposed clairvoyance others attribute to me tells me that the next pope will be in continuity with Pope Benedict XVI and his agenda of reform in continuity. There are three major characteristics of the Pontifex Maximus Emeritus that I would like to highlight:

1. A man of great faith and Catholic spirituality as well as a man of the Church

1. Charisma in the secular sense

2. Managerial skills or a lack of micro-management of the curia or an unwillingness to fire incompetent curial members

Somehow I think the cardinals will pick someone not from the "Church of the Media" as the Pontifex Maximus Emeritus understands the meaning of that term, but a wildcard and it is here that my crystal ball needs a new tube.

But let me state that one of the wild cards is that the Pontifex Maximus Emeritus will be called back from his renouncement of the papacy and given a vote of confidence by the cardinals to mandate what he has only modeled during his eight year papacy.

That would be a true nuclear bombshell to everyone including the "Church of the Media" and has a certain deliciousness that puts way too many pounds on the mid section. But alas I think it unrealistic!

While there are many in the college of cardinals that could be our next "Clonex Maximus" with Cardinals Burke and Ranjith running neck and neck for the first place wild card, I would rather like to focus on two candidates that might be able to fulfill all five of the criteria I list above concerning the Pontifex Maximus Emeritus in terms of his top three gifts and the two he seem to be lacking to a certain extent.

Praytell has descriptions of the two top contenders in my new-tube needing crystal ball, so I cannot guarantee that what I am seeing isn't distorted or so cloudy as to deceive me.

My top contender is what some are calling a reformer, but by that I think one who has the administrative skills to reform the curia but who will reform the Church in continuity with what the Pontifex Maxiums Emeritus has begun and thus is my number one choice for the "Clonex Maximus" and that is Cardinal Angelo Scola. Read what Praytell posts about him by pressing HERE.

My second choice for the "Clonex Maximus" as seen in my most cloudy, new tube needing crystal ball is Cardinal Marc Ouellet. He evidently has the liturgical qualities of the Pontifex Maximus Emeritus as well as the intellectual proximity. Read what Praytell has to say about him by pressing HERE.

And now for the "Fly in the Ointment" of my new tube needing crystal ball is that neither of the two top contenders above as pictured in their Laetare vestments at their titular churches yesterday wore "ROSE!" This is quite crushingly disconcerting and could exclude them from "Clone Maximus!"

However, guess who was wearing ROSE at his Laetare Mass at his titular church yesterday! I love the man, but not as pope, but will accept him, the happy ultra-montanist that I am! Pope Timothy would be a "Clownex Maximus!" 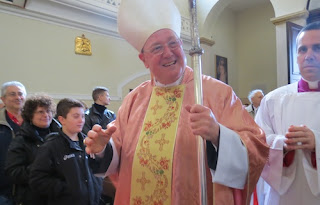 I'm not nervous. I'm beside myself with worry. Nervous was several stages ago.

It'c continuity that is making me nervous. We need a man of action, not business as usual.

One of my concerns with Scola is he is part of the Vatileaks scandal. It was said there was a plot to kill Benedict XVI and put Scola in the papacy. Now, if Scola is elected after Benedict's abdication, I can't see how the whole thing won't be tainted. There will be speculation Benedict abdicated because he did not want to be killed (thus tainting his papacy, as he did not want to be martyred for the faith... he chose to flee, i.e. deny Christ, and live). The sign of lightning striking St Peters... it could have been a warning from God for the Vatican not to go thru with this. The confirmation of such a sign would be if Scola dies within weeks after being elected pope, a la John Paul I.

The Cardinals are calling for a managerial pope to clean up the curia. While I think its important, the primary criteria should be to elect someone who will continue the restoration of the Holy Mass Benedict began. I don't see Scola as that man. Everyone is saying Scola has charisma. I watched some interviews with him, and he's not that chararismatic. You want a charismatic pope, you need to go with Cardinal Tagle or Cardinal Dolan. Will I become a sede if Scola is elected? No. But do I think Scola is the right man for the job? No, I think we desperately need a pope like Giuseppi Sarto at this point in history. But will God, thru the conclave, give us what we need... or what we deserve?

The silver lining in this -- the old adage, "he who goes in the conclave pope, exits a cardinal". Right now, Scola is definately going in pope, unlike just a week ago, when Turkson was the "pope" going in.

If there is as much resistence to reclamation of the sede Petrine to an Italian, any Italian, Ouillet's charisms will become illuminated. And I think he's a "man of action."

One concern I have with Sherer is that the press and various groups will think they were actually consulted i the choice and come to demand more from him, then condemn him when he does not deliver.

OK, after reading the profiles on Scola and Ouellet, I feel somewhat better in that they do not appear to be hostile to Summorum. Nonetheless, it shouldn't be hard to understand why a supporter of Summorum and "reform in continuity" in the OF would be more enthused about a candidate who is well-known as a promoter of those things (Summorum, reform of OF, etc.) as personified in the likes of Ranjith, Burke or Bishop Sample.

People with traditionalist liturgical sensitivities prefer someone who is personally involved and invested in these things--not just someone who merely allows them to exist or supports them without becoming actor and advocate himself.