ANTI-POPE ANYONE? I THINK THERE IS CONCERN AMONGST SOME OF THE CARDINALS ABOUT THE NEW SITUATION OF A PONTIFEX MAXIMUS EMERITUS AND THE FOLLOWING COMMENT CERTAINLY PROVES IT

Silly images you find on the internet! 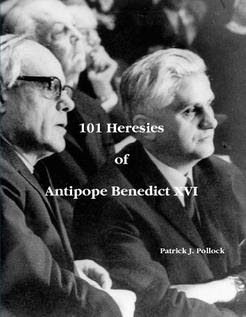 Your Eminence, what will you say to Benedict XVI when, following the end of the conclave, you go meet him?

"So many things. The first one is a recommendation. I will suggest to him to not let himself be used by anybody. The risk is too great that the government of the Church receive his influence. He made a specific choice, that supposed a step back. He, therefore, ought to be discreet. Avoid mingling with the problems related to the government of the Church. Then I will speak amicably with him of what pleases us both, theology."

My comment: There could be a very real possibility (although I sincerely believe we will not again hear from the "Pontifex Maximus Emeritus" given the nature of his personality and the love he has for the Church) that we could enter into a period of the Church of competing popes and where one is declared eventually the "anti-pope."

But in the 2000 year history of the Catholic Church, there have been more than 40 antipopes. Anantipope is a bishop who claims to be the pope, but was not canonically elected as Bishop of Rome (i.e., supreme pontiff).

The term anti-pope refers to any person who claims to be pope, but whose claim is treated as invalid today by the Roman Catholic Church. This should be a straightforward concept, but in practice it is much more difficult and complex than it might appear.

The problems lie in determining who qualifies as pope and why. It isn't enough to say that their election did not follow standard procedures, because those procedures have changed over time. Sometimes the rules aren’t even followed. Innocent II was elected in secret by a minority of cardinals but his papacy is treated as legitimate. It isn't enough to say that an alleged pope did not lead an adequately moral life because many legitimate popes led terrible lives while the first anti pope, Hippolytus, is a saint.

Over time names have shifted back and forth between the lists of popes and anti-popes because people have changed their minds about what to do with them. The Vatican’s official list of popes is called the Annuario Pontificio and even today there remain four instances where it isn’t absolutely clear on whether someone was a legitimate successor of Peter.

Here is a [purported] list of the 42 antipopes that the Church had to contend with before Vatican II:

One of the most notorious cases in Church history was that of the Anti-pope Anacletus II, who reigned in Rome from 1130 to 1138. Anacletus had been implanted in an uncanonical election after Innocent II, the true pope, had already been chosen. Despite his invalid and uncanonical election, Antipope Anacletus II gained control of Rome and the support of the majority of the College of Cardinals. Anacletus held the support of almost the entire populace of Rome, until the true pope regained control of the city in 1138. (The Catholic Encyclopedia, “Anacletus,” Vol. 1, 1907, p. 447.)

My comment: Who will be the first anti-pope after Vatican II and is the stage set for it? Time will tell!
Posted by Fr. Allan J. McDonald at Wednesday, March 06, 2013

Not all antipopes lacked canonical election as you suggest: Pope Urban VI was canonically elected pope and legally enthroned. Then the very same cardinals who elected him got together and elected another pope.

In the past the very fear of having an antipope following the resignation of a living pope led to the former pope's being killed. Presumably that won't happen note that the pope doesn't really attempt to wield any power. Of course, there's a long history of crazy people being elected to the papacy...

Yeah. It was Urban VI. But the antipope was called Clement VII even though the same cardinals elected him.
I don't think it was clear who was the actual pope and who the antipope at the time. I guess they sorted that out she the second antipope was elected. Then there was conciliarism for a while until another pope said no to that even though that council had determined who the actual Pope was...

Weird and confusing history! That probably won't happen this time around.