CHANTING THE PASSION ON PALM SUNDAY 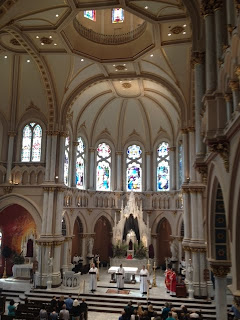 It was a cold, dreary Palm Sunday in Macon. I think we had our March in January and now our January in March, but I digress.

Because of the drizzle, we could not go outside at our two principal Masses at 9:30 and 12:10 PM (the latter is now ad orientem).

So the procession came out from behind the Altar for the blessing of the palms from the sanctuary, the choir chanted the proper antiphon, "Hosanna..." Then as the palms were sprinkled after the introduction and blessing, the procession traveled to the entrance of the Church as the choir once again sang "Hosanna..." Then from the entrance all were asked to turn as face it and the Gospel was read with acclamation and antiphon. Then all sang "All Glory, laud and Honor" as the procession went to the altar once again. I changed from cope to chasuble at the side of the altar as in the EF and then proceeded to incense the altar. After I arrived at the chair, the choir sang the Greek Kyrie. This was an added touch and I recommend it highly! Don't omit the free standing Kyrie when there are preludal rites. Then I chanted the Collect.

The Passion was chanted by three cantors and marvelously. The photo above is from last year, but you get the picture. It was long, about 15 minutes and we stood throughout. I wonder if I should ask people to sit???? I start worrying about the length of things but I think it was well worth chanting. At our other Masses, we did the traditional passion with the congregation and others taking their parts. I like that too.

After my as usual brilliant homily that lasted four minutes, the Mass proceeded in the normal Ordinary Form Way. The 12:10 PM Mass as exactly as the 9:30 AM except the Liturgy of the Eucharist is ad orientem.

I must tell you, that with the influence of the EF on our OF since having the EF now for over five years, I have come to love the Ordinary Form of the Mass more than ever. I love it flexibility and the amble participation of the laity and of the other lay ministers that are allowed. I think traditionalist are barking up the wrong tree when they want to make the Mass overly clerical with out participation of the laity in that which is allowed to them.

Have a blessed Holy Week. Our diocesan Chrism Mass is this Tuesday!
Posted by Fr. Allan J. McDonald at Sunday, March 24, 2013

I didn't realize I wasn't participating when I assisted at the TLM.

I hope no one around me minded, but I did chant quiitely the crowd part at the 1215 Mass. Everything was perfect today. Thaks to all who made this Palm Sunday special!

We have an EF high Mass Easter Sunday at 1 pm.

Excellent! I will certainly be there.

Worrying about the length of things is a very modern liturgical preoccupation. The pre-1955 liturgy for Palm Sunday was considerably longer, almost two Masses back-to-back, and the Passion gospel consisted of the whole of Matthew Chapters 26 and 27! The last six verses were in the more elaborate Gospel Tone, believed to be of Jewish origin (some 20 years ago the Oratorians here restored the practice).

It is a good idea for Christus to be sung by a priest (it is the lowest part and with a little practice is not difficult). The turba choruses should be sung by the choir; for the St John Passion those by William Byrd are outstandingly dramatic, and I have heard them in both Latin and English.

The 1955 revision retained the Introit (Domine, ne longe) and the Kyrie, but these were dropped in Bugnini's second, post-V2 version. I would reinstate both, using the catch-all Novus Ordo excuse of "alius cantus aptus". Incidentally, if the Penitential Rite is replaced by the Sprinkling (as is common on Easter Sunday) my reading of the GIRM is that the Kyrie should be sung; it is only omitted if the 3rd form of the penitential act is used.

I've just watched the Pope's Palm Sunday Mass. Same Italian/Latin mix, much the same ceremonial, cardinal deacons at the throne in dalmatics and mitres (they walked in front of the Pope rather than alongside him). If the vestments were the Pope's personal choice, then he has taste. Understated quality, similar to those you see in the more traditional Benedictine monasteries, such as Pluscarden where they are made by the monks themselves. A lot of the bishops and cardinals in choir dress were sporting lace rochets, even in Passiontide!

I noticed that some of the priests giving Communion to the crowd refused to put the Host into people's hands. Interesting, too, that the Kyrie was sung, along with the rest of Mass XVII.

BTW, did anyone see the enthronement of Justin Welby as Archbishop of Canterbury? Hymns in Punjabi, Hottentots in full tribal fig dancing up and down the nave with bongo drums (giving the Duchess of Cornwall a fit of the giggles) and his Grace wearing a matching psychedelic cope and mitre.

I saw absolutely no coverage on it except for a brief story last night on a rerun show on EWTN. Progressive churches are irrelevant even on the USA and its biased liberal media!

The only quibble I had with the Chanted Passion on Palm Sunday was the lack of Clergy. Is the Passion Reading different from a normal Gospel reading on "any old Sunday USA" in that a Deacon or priest is not the appropriate reader of same?

Good Father - If the US media is biased in favor of liberalism, doesn't it make sense that they WOULD have covered the installation of Archbishop Welby?

You call them liberal - why then would they overlook the installation of a "liberal" to their liking?

Templar, the short answer is, "No." I recall showing last year on this blog, following the same liturgical abuse, that it is, in fact, an abuse.

Because of our relevance, they couldn't ignore us but tried mightily to bring back scandals some recent others decades old to make us irrelevant.

"why then would they overlook the installation of a "liberal" to their liking?"

Because it's a liberalism that is nonetheless nationalistic, insular, and provincial (to put it simply; there's probably a lot to unpack): if you are a superpower, it's awfully tempting to assume that you provide the standard and metric for internationalism and universalism. That's a tendency that is at least as old as the Republic itself, with roots that are older, and thinking that the American Way is equivalent with God's will and God's plan would probably demand a whole entry in itself (as would revisiting Leo XIII's warnings against "Americanism").

"Because of our relevance, they couldn't ignore us but tried mightily to bring back scandals some recent others decades old to make us irrelevant."

And furthermore, when it comes to liberals' pet projects and prejudices, they know that Catholic orthodoxy stands in their way and liberal Protestantism and Catholic liberals are already on side what Everybody Knows. How "irrelevant" is the Catholic Church when the world claims to have "moved on," but yet can't stop complaining about us?

It's like children or teenagers who will snap, "fine! I don't care!" and then stomp off, usually to their friends' place to rant and whine, or to a secluded place where they can text-b*tch their friends in private about how "OMG! Did you know what so-and-so said to meee??" despite how much they supposedly "don't care."

My 1962 Liber Usualis has rubrics for the revised order of Holy Week. The Passion is to be read or sung by ministers at least in the rank of deacon (saltem in ordine diaconatus constitutis). However, with the advent of the vernacular and lay readers in the mid-1960s it was permitted for laypeople to read the parts of Chronista and Synagoga, but the part of Christus was reserved to the priest. Parishes in those days did not as a rule have deacons.

So in the OF you can have two lay cantors. Theoretically they could be female, but the relative pitch of the three parts militates against this.