Yes, the pope of the Council of Trent and the Counter Reformation of the the Missal of Saint Pope Pius V is the first stop for Pope Francis. What can it mean? 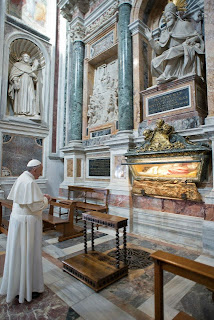 His Holiness, Pope Francis visited St. Mary Major this morning and stopped to pray by the tomb of St. Pius V! Maybe he is reassuring those who are befuddled today not to be too befuddled in terms of “counter” reform in continuity.

“Pope Pius V (17 January 1504 – 1 May 1572), born Antonio Ghislieri (from 1518 called Michele Ghislieri, O.P.), was pope from 1566 to 1572 and is a saint of the Catholic Church.[1] He is chiefly notable for his role in the Council of Trent, the Counter-Reformation, and the standardization of the Roman rite within the Latin Church. Pius V declared Thomas Aquinas a Doctor of the Church and patronized prominent sacred music composer Giovanni Pierluigi da Palestrina.

As a cardinal, Ghislieri gained a reputation for putting orthodoxy before personalities, prosecuting eight French bishops for heresy. He also stood firm against nepotism, rebuking his predecessor Pope Pius IV to his face when he wanted to make a 13-year old member of his family a cardinal and subsidise a nephew from the Papal treasury.

In affairs of state, Pius V excommunicated Elizabeth I of England for schism and persecutions of English Catholics during her reign. He also arranged the formation of the Holy League, an alliance of Catholic states. Although outnumbered, the Holy League famously defeated the Ottoman Empire, which had threatened to overrun Europe, at the Battle of Lepanto. This victory Pius V attributed to the intercession of the Blessed Virgin Mary and instituted the feast of Our Lady of Victory.”

Instead of Fr. Z’s motto, “brick by brick” perhaps Pope Francis will rebuild the Church through chemistry, chemical by chemical! He studied chemistry before entering the Jesuit Order!

And keep in mind, brick by brick, the Jesuits built Saint Joseph Church in Macon! 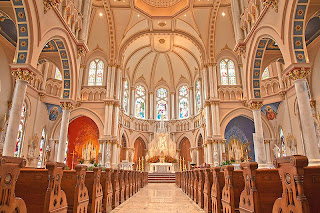 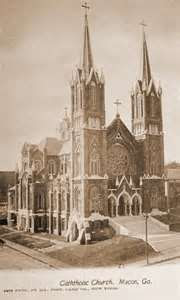 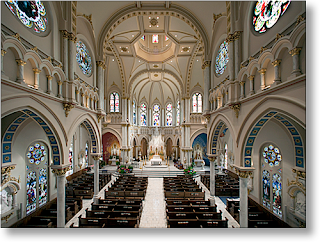 This is one of the most positive indicators that I have seen so far from our new Pope. Does it mean that Pope Francis will be a counter-reformer (straightening out the Curia, and, hopefully, continuing Benedict's liturgical reform in continuity?). Does it have any implications regarding the EF (after all, the '62 Missal is a slightly modified version of the Missal of St. Pius V)? Is it simply a plea for intercession to a predecessor or could it also be a gesture of reassurance to traditionalists who are concerned because this Pope's apparent record as bishop of Buenos Aires regarding a lack of EF Masses (see the long Rorate Caeli article from yesterday for more on this).

I pray that this Pope will be a strong and fearless reformer. I have no question that he will adhere to traditional doctrine and will be outspoken on that. I like the fact that he actually refers to the devil by name (like Card. Ranjith).

I also hope and pray that he will continue on the liturgical path started by Pope Benedict XVI. I give him a pass for using the Ikea versus populum altar yesterday because all that temporary Conclave stuff had not yet been removed. I hope he will use the real ad orientem altar there in the future. If he doesn't then that could be a setback, liturgically speaking. I won't expect him to use lace-trimmed albs, etc. but I hope he keeps Guido Marini (who wore a plain surplice yesterday) and doesn't try to revert to 1970's ways. As I've said before, let's wait and see.