PROGRESSIVES BELIEVE THE "EF" AND "OF" WERE NOT FORESEEN BY VATICAN II AND THUS IS ILLEGITMATE; I WONDER IF THEY FEEL THE SAME THING ABOUT HAVING AN "EP" AND AN "OP" AT THE SAME TIME TOO?

Of the two forms of the one Latin Rite Mass and the two forms of the popes of the one Catholic Church, which one of each, if progressives are consistent in their whining, would they think Vatican II never foresaw happening in the Post Vatican II Church? According to their whine, which one of each of the two types of Mass and Popes should be suppressed today? I report you decide!

The EF Mass, one of two forms of the one Latin Rite: 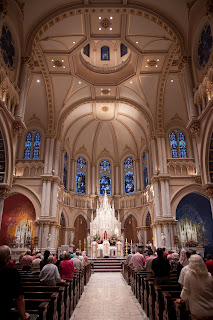 The OF Mass, the other form of the one Latin Rite: 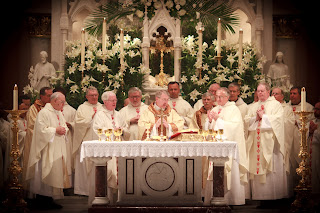 At the Praytell Blog, there are those who post and those who comment (I comment often as the lone voice of reason :))who believe that the Second Vatican Council never foresaw that the Latin Rite of the Catholic Church would have two forms of the one Latin Rite, the Extraordinary Form and the Ordinary Form, what is now called the EF and the OF.

But the same pope who gave us the Extraordinary Form of the Mass (EF) along with the Ordinary Form Mass (OF) as legitimate organic development in Vatican II reform in continuity has also given us the Emeritus Pope (EP) and the Ordinary Pope (OP) too! I wonder if they disagree with Pope Benedict on that too? Do they see Pope Francis as illegitimate and not foreseen that we would have two popes in the one Catholic Church? Do they vociferously disagree with Pope Benedict in bringing this new reality about in the Catholic Church which Vatican II never, ever, ever foresaw, just as they say Vatican II never foresaw two forms of the One Latin Rite?

The Emeritus Pope (EP) and the Ordinary Pope (OP). Which one, according to the progressive Catholic's mentality is "illegitimate" and thus the modern "anti-pope?" 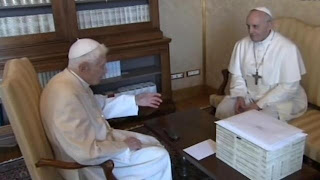 I don't think the EF is "illegitimate." But has there ever been a time when there were two "forms" of the Roman Rite?

Yes there has been this aberration ever since Pope Paul approved a newly concocted Mass but allowed from the beginning of its intrusion into the liturgical life of the Church as a rupture from liturgical tradition the Mass of the ages. So yes with the advent of the created Mass and from day 1 the older form never ceased to be celebrated somewhere despite the breach of tradition with the imposed novel one.

If the "old" mass was never abrogated, why was an indult needed (under Ecclesia Dei) for its celebration?

And if the "old" mass was never abrogated, isn't it a COMPLETE rupture with tradition to have TWO forms of the Roman Rite?

There was an insult from the start for older priests and England old and stoggy as they are! But you know how fascist the reformers where in causing this two rite situation, complain to them, they started it! They created it and triid and failed to abrogate completely the Ordinary Mass in its one form by making up something new.

There have of course been different Uses of the Roman Rite, some of them still used and quite well-known, such as the 13th century Dominican Rite which differs in many details from the Tridentine, but is still Roman. When the 1970 Mass is sung in Latin, using the Graduale propers and the Roman Canon, it can come over as another Use of the classic Roman Rite. But in this case appearances are deceptive; it is a new Mass, and its authors were fully conscious of this. One of the authors, Fr Gelineau SJ, admitted that the Roman Rite "is no more - it has been destroyed".

Clearly Paul VI intended his missal to supersede the older one. But this is not to say that the older Rite was abrogated, or indeed that any valid Rite can ever be formally abrogated, which was the conclusion of the committee set up by John Paul II to examine the legal status of the classic Roman Rite. What had happened in the 1960s was without precedent in the history of the Western Church.

Fast-forward to Summorum Pontificum. Benedict XVI wanted to give priests the freedom to use the older books, and the laity the right to have access to both Mass and sacraments contained therein, as being part of the patrimony of the Church. However, the Novus Ordo was too revolutionary in too many respects to be considered simply as a Use of the Roman Rite, yet he could hardly say "on the one hand we have the Roman Rite, still recognizably so in its 1962 version, and on the other hand an equally valid new Rite approved by Rome and in widespread use".

So the idea that there are two forms of a single Roman Rite is really a legal fiction. There is also the idea that the continued celebration of the Roman Rite can somehow anchor the New Rite. This is important. The old rites evolved gradually over centuries, with many regional variations, many of which died out, but some of which survived until modern times. The new rite was expected to evolve rapidly, with inculturation leading within a couple of decades to local liturgies of considerable diversity; a diversity which would mean that most, if not all of the Mass texts would be locally generated, not merely paraphrased from the Latin originals.

I suspect that some of the usual suspects over at PTB would like to wind the clock back to 1975 and restart the revolution. They dismiss the classic Roman Rite as an irrelevance, but its very existence is a threat.

Funny over there many, like Inwood, say over and over that extraordinary should mean rare if hardly ever--yet love armies of extraordinary ministers of holy communion at each Mass.

It scares me that bishops throughout the world would even be considered to be competent and trusted enough to make up their own liturgical texts.

Perhaps SP is due to intercession of Venerable Paul VI to God.

I agree that the Council never foresaw two forms of Mass. If any of the folks at PTB were to actually read the documents of the Council, I am sure they would be shocked to learn that Latin is preferred and Gregorian chant to have pride of place in liturgical music.

What allows these people to be so rabid is the convenience of never having read the documents, and therefore being unencumbered by inconvenient truths. They simple believe that the Council mandated that all things be changed, simplified, banalized. In a word, Protestantized.

The EF, with centuries of use, has standing, as the lawyers would say. The OF is the usurper. If anything is out of place that surely is the one.

John - If there was/is a Dominican "Rite" then it is a rite unto itself and not simply a second "form" of the Roman Rite.

Having two forms of one rite, legal fiction or not, is a rupture with the Church's tradition.

John Nolan has a good point. I think there is an Easter lesson there, as well.

FWIW, I traveled to Kansas City to enjoy the recent blizzards and attended the local TLM parish for Holy Week Mass. Here is what I saw: the Parish Church is a very humble structure on the Kansas side of the river. Recently renovated it was re-opened only last week. It has an American West feel to the architecture with lots of clay tile, wooden beams and relatively bright colours. Yet it is extremely dignified and altars (three in this tiny church!) are gorgeous. The priest and deacons really knew their stuff, the chant was as beautiful as any I have heard, they sounded professionally trained, although the priest had a very distinct American accent in his Latin 'a' and 'r'.

Here is the point: this very new TLM parish (FSSP) has reclaimed a Spanish era Church building and has presented for their parish what FrAJM has done in his solemnised NO Masses. So the execution was very much EF, yet was not in a European style (at least as it ends at the Pyrenees) church. It was very accessible, the priest came out before Mass and explained to everyone what was going to happen with the extended procession as altered by the snow storm, as well as the special events of this particular Mass. This made things very accessible, ala the NO, yet was very dignified and reverent as expected of the EF.

My point is that this is new era of the two Mass forms can be done successfully and both can be made participative and reverent. I think the baseline should be the EF altar arrangement, ad orientem, and kneeling. The Liturgy could vary according to the form as could the use of Latin for parts of the NO.

Pater, it was not abrogated. To abrogate you have to decree it. For example, the Franco-Seraphic Missal used by the Franciscans was specifically, actively abrogated by decree of Paul VI. 1962 Missale Romanum was not.

Pater, the Dominican 'rite', which I have already explained is more properly a Use or 'variant' of the Roman Rite, was drawn up by a committee(!) so that the itinerant friars would not have to keep chopping and changing to suit local custom. It was not newly composed, but drew on a number of existing Uses. So before V2 there were already different variants or forms of the Roman Rite, although the Tridentine was by far the most common.

I assume you're objecting to the novel term 'forma'. As I explained, the 1970 Missal is too far removed from the Roman Rite to be considered a Use of that Rite, despite the last-minute changes insisted on by Paul VI, most notably the retention as an option of the (modified) Roman Canon which the reformers had wanted to suppress entirely. So new terminology was necessary.

The Roman Rite is a historico-liturgical entity. It does not simply mean "the Rite currently celebrated in Rome" which is in most cases the 1970 Rite. However, such a distinction might confuse the faithful, hence the legal fiction that there are two 'forms' of a single rite.

In other words, stop quibbling over terminology and accept the obvious fact that the real rupture with the Church's liturgical tradition occurred between 1964 and 1969. No-one who was around at the time had any doubts on that score, not least Paul VI himself.