It seems this cartoon can be applied to both ultra progressive and ultra traditionalist Catholics in light of the new day that has dawned with Pope Francis! 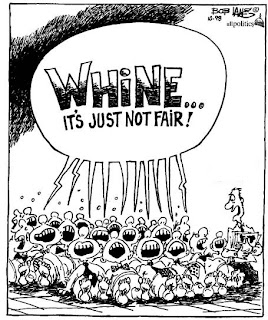 You can read Fr. Z's take on this by PRESSING THIS SENTENCE! His views are based upon an article in the National Chismatic Reporter (NCR) and the take of an ultra-feminist progressive, post-Catholic.

As some of you know, Pope Francis has good ties to a Catholic Movement known as Communion and Liberation, a conservative movement to say the least. Fr. Z's post gives some very good insights into this "new" movment.

My fear is that silly traditionalists who only want a liturgy that is of a certain kind, rather than a diversity of liturgies (which has always been my desire, but within reason) are going to fail to see how this simple Pope will continue the reform of the reform but with a new dynamism.

MARK MY WORD! We may not like his counter-reform of the reform, but make no mistake it is not going to be 1960's stuff!
Posted by Fr. Allan J. McDonald at Sunday, March 17, 2013

Oh yes, please do shut up you silly traditionalists.

It is almost amusing to watch all the gushing from the "Catholic Left" (i know, it's an oxymoron) about Francis. They are so certain that he is going to renew the Kumbaya Epoch that was ushered out with Pope Benedict.

I won't predict what this pope will do, but I do believe we are facing a temptation that is easy to fall into: Just as the left sinned for the last seven years by their disrespect of Pope Benedict, we who love tradition are being tempted to disrespect Pope Francis. There is so much confusion and chaotic exchanges of information going on about him on the internet, with some bloggers denouncing him already as a precursor to the end of the Church.

Again, the Devil ropes us in with lies. He sows confusion. It's tempting to get all caught up in it.

He's the pope. God knows what He is doing.

I agree, but do not think that is particularly insightful. The concern traditionalists have with Pope Francis is his return to Liturgical form that is less God centered. If he will allow TLM to continue its path, then we will be able to make do, after all that was exactly the state under B-XVI. Liberal Catholics will not abide with traditionalists and want them stopped without recourse. When he fails at any single item of their agenda, they will turn on him.

Most traditionalists that I know have always had a great deal of respect for the Eastern Rites and many also have a high regard (and some envy) of high-church Anglo-Catholic liturgy (basically a Tridentine Mass in English). So traditionalists can and do respect a diversity of liturgies. They do not expect a monolithic liturgy for the entire Church. What they don't want to see is modernistic fabricated liturgies.

Given that, traditionalists do definitely desire more uniformity within the Ordinary Form of the Latin Rite. Is it so silly to desire basic norms for ad orientem and reception of Communion kneeling and on the tongue while allowing for the use of some (or even all) vernacular? Is it really so silly and unrealistic to expect these kinds of basic norms for the Latin Rite while valuing and respecting the other Rites and the Anglican Ordinariate within the Roman Catholic Church?

I respectfully submit, to both Father McDonald who owns this Blog, and Father Z of internet fame, that both of you, and the rest of the Catholic world will be far from pleased in a year or two when the worst fears of even CENTRISTS are realized and the new Bishop of Rome (as he refers to himself) is revealed to be about as far left in ideology as we can imagine. I will not darken Father's Blog repeating it ever chance I get, but I did want to get on record as having said it, and would be extremely happy to be proven wrong.

I'm not saying you're wrong. But if you are going to make statements like that, could you give us some evidence from credible sources?

Keyser Soze, I think you've got it about right.

I think what we need to be seeing here is continuity. And it will be crucial to see that, especially with the usual liberal harping about their pet false dichotomies (social justice is opposed to doctrinal orthodoxy? Rubbish! What utter, flaming NONSENSE, to say nothing of despicable *drivel*).

But yeah, all we need is for the TLM to continue, because it was never abrogated, anyway. There is a liturgical conference in Rome coming up this summer, and Nicola Bux will be there (he wrote a new book on Benedict XVI's reforms which was published last year).

But we can't pit the TLM over and against the Novus Ordo, either. Benedict didn't, and neither should we. Plus, there's no reason why what the TLM has taught us cannot be applied to the Novus Ordo. Benedict XVI has already done this, anyway. The Novus Ordo is as God-centered as the TLM as long as you're able to block out the crap that some slot into it. Nothing has made this clearer than attending the daily Novus Ordo (no music!).

Thing is, rcg, if those traditional elements "infiltrate" the Novus Ordo, so that we have more reverent Novus Ordos, who says that the liberals have "won"? How do they propose to stop traditionalists? If anyone here helps out with catechesis, one way to keep enforcing the point is to keep referring to the Mass. Let the TLM guide the way you pray the Novus Ordo; it makes it way easier that way to point out how the dreck actually distracts people from having "a personal relationship with Jesus Christ."

You know, whenever Catholics and some Protestants pull a "What Would Jesus Do?" in order to excuse any and all behavior and to justify their opinion that the Catholic Church's worship and teaching should change to suit them-- as is the case with "joyful noise," etc.-- it's funny that it never seems to occur to them that Jesus may want them to be still: "Peace, be still."

For those liberals who keep harping on Francis's "low Mass" liturgical style, puh-lease: they wouldn't like the low Mass EF. But Evelyn Waugh did, and for the one time I've attended it, I think I can see why Waugh did-- he saw the humility and duty in the priest who celebrated it every day, without fail.

That is IF the Holy Father speaks his mind about these issues. Now Pope he may feel the pressure to soften his language and be politically correct. If so, then the Pontificate and the manner in which it is defined will indeed become about the vestments he ears and the color of his shoes. Let's see if Pope Francis speaks openly and clearly about Church doctrines to the media or if he hides behind what he says as a Cardinal. That will speak volumes about his agenda and also effectiveness.

When you say, “and the new Bishop of Rome (as he refers to himself) is revealed to be about as far left in ideology as we can imagine,” and apart from Anonymous’s question about credible sources on which you base your opinion, there is the definitional question: What specifically do you have in mind in referring to “far left in ideology”? It will be difficult for others to judge the degree of your clairvoyance =) without knowing this.

My personal goal would be for every parish in the Anglosphere to offer one Mass in EF. If I was able to direct that, It would be the High Mass on Sunday and a Low Mass at least one day per week. It is truly revolutionary and would be exactly what could have helped counter what happened in Argentina and Chile. People who kneel before God and can stand up to anyone else. I would like to see an effort to convert the Holy Father to that understanding, if that is needed.

Communion and Liberation is a movement in the Church which has the purpose of forming its members in Christianity in order to make them coworkers in the Church’s mission in all areas of society.
CL began in 1954 in Italy, at the Berchet classical high school in Milan, when Father Luigi Giussani (1922-2005) started an initiative of Christian presence which uses the pre-existent name Gioventù Studentesca (GS; English: Student Youth).

Its current name, Communion and Liberation (CL), appeared for the first time in 1969. This name brings together the conviction that the Christian event, lived in communion, is the foundation of man’s authentic liberation. As Benedict XVI declared, Communion and Liberation “today … offers a profound way of life and actualizes the Christian faith, both in a total fidelity and communion with the Successor of Peter and with the Pastors who assure the governing of the Church, and through spontaneity and freedom that permit new and prophetic, apostolic and missionary achievements” (Address to CL, March 24, 2007).

Giussani summed up the content and purpose of his effort in these words: “From my very first day as a teacher, I’ve always offered these words of warning to my class: ‘I’m not here so that you can take my ideas as your own; I’m here to teach you a true method that you can use to judge the things I will tell you. And what I have to tell you is the result of a long experience, of a past that is two thousand years old.’ From the beginning, our educational efforts have always stood by this method, clearly pointing out that it was intended to show how faith could be relevant to life’s needs.
As a result of the education I received at home, my seminary training, and my reflections later in life, I came to believe deeply that only a faith arising from life experience and confirmed by it (and, therefore, relevant to life’s needs) could be sufficiently strong to survive in a world where everything pointed in the opposite direction, so much so that even theology for a long time had given in to a faith separated from life. Showing the relevance of faith to life’s needs, and therefore – and this ‘therefore’ is important –showing that faith is rational, implies a specific concept of rationality. When we say that faith exalts rationality, we mean that faith corresponds to some fundamental, original need that all men and women feel in their hearts.” (Luigi Giussani, The Risk of Education, New York 2001, pp. 11-12).

Communion and Liberation is present today in roughly eighty countries on all the inhabited continents, and is guided by Father Julián Carrón, who succeeded Father Giussani after his death in 2005.
No form of membership enrollment is involved, but only the free participation of individual persons. The basic instrument for the formation of those who belong to the Movement is a weekly catechesis which is called the School of Community.
The Movement’s official publication is the international monthly magazine Tracce-Litterae Communionis, published in English as Traces.