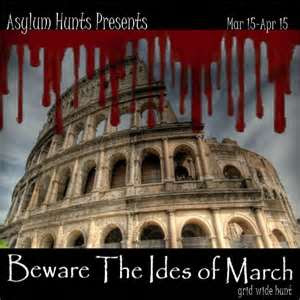 From Wikipedia! The word Ides comes from the Latin word "idus", a word that was used widely in the Roman calendar indicating the approximate day that was the middle of the month. The term ides was used for the 15th day of the months of March, May, July, and October, and the 13th day of the other months.[1] The Ides of March was a festive day dedicated to the god Mars and a military parade was usually held.

In modern times, the term Ides of March is best known as the date on which Julius Caesar was assassinated in 44 B.C. Caesar was stabbed (23 times) to death in the Roman Senate by a group of conspirators led by Marcus Junius Brutus and Gaius Cassius Longinus. The group included 60 other co-conspirators according to Plutarch. Another point which arises is Shakespeare's use of the Ides of March and (the lack of doubt in) Marcus Brutus' decision to assassinate Caesar to portray an atmosphere of madness, pleasure, and pandemonium. It is said that on ides of March the sea succumbs to chaos and the full moon brings high tides. All these points give the Ides of March a very mysterious quality.[2]

According to Plutarch, a seer had foreseen that Caesar would be harmed not later than the Ides of March; and on his way to the Theatre of Pompey (where he would be assassinated), Caesar met the seer and joked, "The ides of March have come", meaning to say that the prophecy had not been fulfilled, to which the seer replied "Aye, Caesar; but not gone."[2] This meeting is famously dramatised in William Shakespeare's play Julius Caesar, when Caesar is warned by the soothsayer to "beware the Ides of March."[3][4]

Furthermore, Suetonius writes that the haruspex Spurinna warns Caesar of his death which will come "not beyond the Ides of March" as he is crossing the river Rubicon.

My clairvoyance doesn't tell me what all this foreboding stuff means. Can anyone decipher it?
Posted by Fr. Allan J. McDonald at Tuesday, March 05, 2013

endanI have to disagree with you on this one. I believe that this conclave is going to be longer than two days. We live in the age foretold where bishop is against bishop and priests are against other priests. There are deep divisions in the Church and the most intransigent liberal Cardinals are going to fight with everything they've got to elect a pope that will maintain the status quo even longer and delay the return of tradition and the cleanup of the curia. We must all pray that they do not prevail.

Make no mistake: The closer the modernists get to irrelevance, the more desperately they hang on.

I think it means you watch too much television and should restrict your internet. Now turn off your phone and go listen to confessions, rake the yard, edge the walks, and make a list of all the trim that will need painting!! LOL!!!

I think it means that the pellet with the poison's in the flagon with the dragon; the vessel with the pestle has the brew that is true.

Bishop Davies in the UK strongly urged Catholics to “take no part” in “punditry” over who would replace Benedict. “During my visits to primary schools children often ask me as their bishop such questions: how old are you? which football team do you support? what is your favourite food? Perhaps with a little more adult sophistication we might have the same curiosity about our next Pope. In the days ahead we will hear many apparent experts urging the merits of one candidate or another. I ask you to avoid taking any part in this: the days before us surely demand of Catholics not punditry, but prayer!”

I think I am safe as I am not a pundit but a clairvoyant bordering on the mortal sin of sorcery.

I wonder if Brutus and Longinus got wind of the seer’s prediction and thought to themselves “Hmmm. Now there’s an idea.” Sorry, I am such a spoilsport.

For those interested: the shortest conclave in history was 10 hours because it was only a month after the previous conclave. Another lasted 2 days and resulted in the Great Western Schism.

Along with "ides" for the middle days of the months, the Romans called the beginnings of the months the "calends" from which comes our term calendar.

Calends is related to "calare" - to call out - which the Roman priests did with the appearance of the new moon....

Once this is over, we'll all feel more like we do then than we did before....