REFORM IN CONTINUITY AND CONTINUITY IN PAPACY, ESPECIALLY WITH A LIVING BENEDICT XVI, PONTIFEX MAXIMUS EMERITUS AND OMENS IN THE SKY

Maybe I am wrong, but I don't believe, as my clairvoyance informs me, that the cardinal-electors will elect a man that will create a "rupture" in terms of the direction of the papacy since 1978, especially as the new pope's predecessor will still be alive. Any pope, bishop or priest who lives in the shadow of his predecessor still living knows that it is best to keep continuity rather than promote rupture and thus be perceived as dishonoring his predecessor.

So I predict the next pope will continue the Liturgical reforms of Benedict XVI and kick it up a notch. That he will call out heresies in the Church and perhaps list them in some kind of encyclical or syllabus.

I do think there will be some house-cleaning in the curia and that the new pope, while not micro-managing the day-to-day affairs of the Vatican will select bishops and cardinals that will do what he wants and not be loose canons, so to speak, in the Vatican working against the Holy Father instead of with him.

Keep in mind the Pope Emeritus Benedict XVI was very magnanimous about his predecessor Pope John Paul II. Apart from personality differences, the Holy Father Emeritus never undid any aspect of Pope John Paul in the areas of faith and morals although he address the hot-button issues of the day in a more forthright way and disciplined people more so than John Paul II.

John Paul II delegated way to much control of the liturgy to the liturgical progressive and Master of Ceremonies, the first Marinni. The second Marinni under Benedict did it Benedict's way, liturgy in continuity.

But now, there is a comet in the sky and it is flying close and this on the heals of a asteroid and a meteor within inches of the earth and the meteor crashing into Russia that needs a specific consecration to the Blessed Virgin Mary, which the next pope will definitely do. And these astrological phenomenon along with a lighten strike on Saint Peter's hours after the Holy Father announced his renunciation of the papal throne. 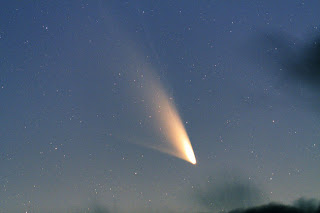 And now we have Saint Malachy's prophesies coming to fruition with the conclave beginning on 03/13/13 and the election of the new pope on the Ides of March and his "coronation" on Saint Patrick's Day, the homeland saint of Saint Malachy. It doesn't get any spookier than this folks.

November 21, 1964: Pope Paul VI renews, in the presence of the Fathers of the Vatican Council the consecration of Russia to the Immaculate Heart.

May 13, 1982: Pope John Paul II invites the bishops of the world to join him in consecrating the world and with it Russia to the Immaculate Heart. Many do not receive the invitation in time for the Pope's trip to Fatima, where he accomplishes the consecration. Sr. Lucia later says it did not fulfill the conditions.

August 29, 1989: Sr. Lucia affirms in correspondence that the consecration "has been accomplished" and that "God will keep His word."

1990: East and West Germany are unified.

December 25, 1991: Dissolution of the Union of Soviet Socialist Republics

The "correspondence" in which Sr. Lucia allegedly affirmed that the consecration "has been accomplished" was simply an ubstubstantiated report by the Vatican Information Service. Further, the consecration she allegedly referred to was a consecration of the world, as anonymous admits.

However in 1982, a Salesian priest, Fr. Umberto Pasquale, met Sister Lucia and asked her if Our Lady had ever spoken to her about the consecration of the world to her Immaculate Heart. Lucia's Response: ""No, Father Umberto! Never! At the Cova da Iria in 1917 Our Lady had promised: I shall come to ask for the Consecration of Russia."

In 1985, Sister Lucia was asked again in an interview with Sol de Fatima if the consecration had been accomplished. Lucia's response: "There was no participation of all the bishops and there was no mention of Russia."

So has Russia been converted?

Russia leads the world in abortion rates.
Russia is one of the world's leading producers of child pornography.
Russia leads the world in suicide rates.
Russia continues to arm itself for a future war.
Russia continues to arm terrorists.
The Russian Orthodox Church is staffed by many "bishops" who are, in fact, former KGB operatives.
The Catholic Church is persecuted like no other religion in Russia. Most of the priests are foreign born and most of the Catholics live in Siberia. Visiting priests cannot get visas for longer than six months and many get their visas revoked for no reason.

If this is conversion, then Hugo Chavez will be our next canonized saint.