A SEAGULL ON THE SMOKE PIPE OF THE SISTINE CHAPEL, WHAT DOES IT MEAN IN CELTIC LORE??? 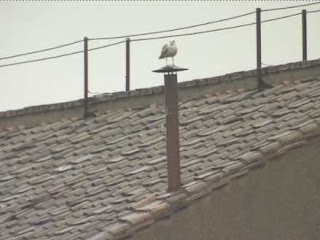 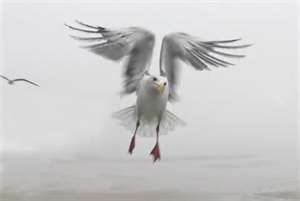 I just happen to have the live Vatican Feed on the internet and was watching the crowds gathered on a rainy afternoon to which the smoke stack on the Sistine Chapel, when I heard applause. I thought for sure it was white smoke, but no, a seagull had landed and is still on the very tip of the smoke stack.

What could it mean? Well here is what one internet site reports:

The seagull is associated with Lir, a Sea-God in Celtic lore. Like many birds, the seagull flies between the earth and the "heaven" world, bringing messages from the Gods to mortals. Gulls are highly intelligent with a complex social structure developed partly to ward off predators and can represent feelings of safety, the security of home, or a close-knit family/community in certain dream interpretations. Gulls live in colonies and sometimes utilize tools and although they are equally clever, are not symbolically associated with trickery and thievery the way that crows and ravens are in many cultures.

It was probably tired. =)

Pope Francis??? My God, My God, what have you foresaken us???

Looks like all the good Benedict XVI did in the last 8 years is about to be undone, and the protestantaazion of the Church according to the spirit of Vatican II will go into full force.

Time to give the SSPX a serious look.

On what do you base your response?

This only reinforces how utterly out-of-touch these cardinals are. We have a Church full of young people who are only going to be more alienated as the "Spirit of Vatican II" keeps us locked in the 70's.

I hope St. Malachi was wrong. We need something much stronger than this to lead us into the final battle.

I feel the same way I did when Obama was re-elected.

No celebrating for me tonight. Only sadness. What a lost opportunity.

Before the Conclave: Do the Italian Cardinals really dislike each other that much?

A Jesuit? I have not been very happy with Jesuits.

Interestingly, I see despairing comments from both traditionalists and progressives, all over the web.

Mindful that the office can change the man, I shall wait and see; it matters less what hes done than what he will do.

Is it Francis of Assisi or Francis Xavier?

But why speculate at all? We will all know soon enough.

Because I want to know! Assisi doesn't make sense. Xavier does. excuse me for asking.

I did not intend my comment as criticism, and I am sorry if you took it that way. I was just suggesting a little faith among all of us.

Also, look at some of the comments so far. Some evince shock and seem appalled that a Pope could take St. Francis of Assisi as his inspiration (assuming Francis of Assisi is indeed the inspiration or at least part of it). Why for goodness sake? Is St Francis of Assisi now a progressive liberal or whatever the preferred pejorative term is? This is our new Holy Father we are talking about!

Anon 2, Progressive liberal is not a pejorative term. It is a perfectly accurate term describing the enemies of the Church. No, Francis was not one...he was a mystic, actually.

Without wishing to start a semantic battle, I would want to defend my use of the term “pejorative.”

I am not sure accuracy or inaccuracy is the point. Online Merriam-Webster defines “pejorative” as follows:

Ergo, “progressive liberal,” especially as used on this blog.

And, of course, I agree – St Francis was a mystic. In my view, we could do with more genuine mystics in the Church. Perhaps Pope Francis is one.

Anon 2, Many progressive liberals ( a redundancy) proudly claim the name. I am glad, however, that you consider it a slur. Perhaps there is hope...