YOU WANT CATHOLICISM, AUSTERE POPE FRANCIS GIVES IT TO US, BUT CAN WE TAKE IT? 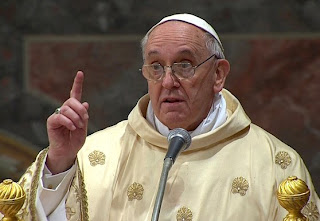 TO WALK, TO BUILD, TO WITNESS, ALWAYS WITH THE CROSS OF CHRIST

Vatican City, 14 March 2013 (VIS) – This afternoon, the Holy Father Francis celebrated the “pro Ecclesia” Mass in the Sistine Chapel with the 114 Cardinal electors who participated in the Conclave and those who assisted with its functions.

The first reading was a canticle from the Prophet Isaiah that begins with the words: “In days to come, the mountain of the Lord’s house shall be established as the highest mountain” and continues with the celebrated verses: “He shall judge between the nations, and set terms for many peoples. They shall beat their swords into plowshares and their spears into pruning hooks; One nation shall not raise the sword against another, nor shall they train for war again.” The second reading was from the First Letter of Peter dedicated to the common priesthood of the faithful, which reads: “like living stones, let yourselves be built into a spiritual house to be a holy priesthood” and exhorts us to be “a chosen race, a royal priesthood, a holy nation, a people of His own, so that you may announce the praises” of him who called you out of darkness into His wonderful light”.

The Gospel reading told the story of Peter's confession when Christ asked His disciples: “And you, who do you say I am?” and Peter answered “You are the Messiah, the Son of the living God.” Jesus said to him in reply: “And so I say to you, you are Peter, and upon this rock I will build my church, and the gates of the netherworld shall not prevail against it.”

In his first homily as Pope, and speaking in Italian without a text, Francis noted that the three readings have something in common:

The pontiff recalled that the first thing God said to Abraham was: “'Walk in my presence and be blameless.' Our life is a path. When we stop walking there is something that isn't right. To walk always in the presence of the Lord, in the light of the Lord, seeking to live the blamelessness that God asks of Abraham in His promise.”

“To build,” he continued, “to construct the Church. This means stones. Stones are solid but these are living stones, stones that are anointed by the Holy Spirit. To build the Church, the Bride of Christ, on the cornerstone that is the Lord himself.”

“To witness … We can walk when we want to, we can build many things, but if we do not witness to Jesus Christ then it doesn't matter. We might become a philanthropic NGO but we wouldn't be the Church, the Bride of the Lord. When we don't go forward we stop...we go backwards. When we don't build on rock, what happens? The same thing that happens to children when they build sandcastles at the beach. They wind up falling down because they have no solidity.” Then, citing Leon Bloy, the Holy Father affirmed: “Whoever does not pray to God, prays to the devil” because “when we don't witness to Jesus Christ, we witness to the worldliness of the devil.”

“And I wish that all of us, after these grace-filled days, might have the courage, yes, the courage to walk in the Lord's presence with the Cross of the Lord, to build the Church on the blood of the Lord that is poured out on the Cross and to witness to the sole glory: to the crucified Christ. And thus the Church will move forward.”

“I wish for us all that the Holy Spirit, through the intercession of Mary, our Mother, grant us this grace: to walk, to build, and to witness to Jesus Christ.”

My Comments: Clairvoyant that I am, in my 8:00 AM homily, long before His Holiness, Pope Francis gave the homily above, I spoke of Pope Francis taking St. Francis name in part based upon the private revelation St. Francis of Assisi had of our Lord who spoke to him from the cross, "Rebuild my Church." St. Francis initially understood that in a "stone by stone" way but then came to understand that is referred to the all the baptized, clergy and laity alike and when the living stones of the Church are by God's grace converted to Him then the structures of the Church will function as these should. God doesn't want the reformation of things, but of people who then follow our Lord more closely, confess Him properly." Now tell me if I am not clairvoyant!

But I was puzzled by the Holy Father's reference to Leon Bloy. I did not know of him but Wikipedia states the following:

Bloy was born in Notre-Dame-de-Sanilhac, in the arondissement of Périgueux, Dordogne. He was the second of six sons of Voltairean freethinker and stern disciplinarian Jean Baptiste Bloy and his wife Anne-Marie Carreau, pious Spanish-Catholic daughter of a Napoleonic soldier.[1] After an agnostic and unhappy youth[2] in which he cultivated an intense hatred for the Roman Catholic Church and its teaching,[1] his father found him a job in Paris, where he went in 1864. In December 1868, he met the aging Catholic author Barbey d'Aurevilly, who lived opposite him in rue Rousselet and became his mentor. Shortly afterwards, he underwent a dramatic religious conversion.

Bloy's works reflect a deepening devotion to the Catholic Church and most generally a tremendous craving for the Absolute. His devotion to religion resulted in a complete dependence on charity; he acquired his nickname ("the ungrateful beggar") as a result of the many letters requesting financial aid from friends, acquaintances, and complete strangers, all the while carrying on with his literary work, in which his eight-volume Diary takes an important place.

Bloy was a friend of the author Joris-Karl Huysmans, the painter Georges Rouault, and the philosopher Jacques Maritain, and was instrumental in reconciling these intellectuals with Roman Catholicism. However, he acquired a reputation for bigotry because of his frequent outbursts of temper; and his first novel, Le Désespéré, a fierce attack on rationalism and those he believed to be in league with it, made him fall out with the literary community of his time and even many of his old friends. Soon, Bloy could count such prestigious authors as Emile Zola, Guy de Maupassant, Ernest Renan, Alphonse Daudet, Joris-Karl Huysmans, Paul Bourget and Anatole France as his enemies.


Finally, Pope Francis has a very austere style liturgically and in keeping with the spirit of the Liturgy of the Latin Rite. In a video of a kind of youth Mass that is really over the top in terms of the over the top antics of those performing in the liturgy, acting if you will, filled with gimmicks, Cardinal Borgoglio simply does his thing, witnessing to the simplicity that is menat for the Roman rite and thus modeling for the others the true spirit of the Liturgy.

I was drivin' through Texas once and nearly ran into austere who had wandered through an open gate into the highway.

We'll see..austere, to me, means tightly structured liturgy, no embellishment such as Priestly shenanigans, say the black and do the red. I would not describe most of the OF Masses I attend (excepting St. Jo's and a couple of others) as "austere." I would describe them as casual, happy-go-lucky, and just a darn good time was had by all. Holy Protestantism, Batman!

I don't know how I feel about Pope Francis. On the one hand, he has the image of one who is going to be all about wordly/horizontal issues (social issues, the poor, etc) while the mystical/vertical issues (continuing the restoration of the Holy Mass begun by our beloved Benedict the Great, restoring Catholic traditions and spirituality) will be put on the back burner or ignored. There are rumors Francis is hostile to Summorum Pontificum, that he is quoted saying the Anglican Ordinariates are "unneccesary", and he knelt to be blessed by a protestant minister. Media (including EWTN) are giving backhanded slams at Benedict XVI by saying how "refreshing" Francis' simple humble style is.

On the other hand, Francis prayed before the tomb of Pope St Pius V. He has a great devotion to Our Lady, and no less than Fatima obessor Fr Nicholas Gruner, recieved letters from then-Cardinal Bergoglio, and believes Pope Francis will be the one to do the Concescration of Russia (not the "world" as previous popes have done). To add to that, Francis is a form of Francesco, one of the Fatima seers, plus he was elected on the 13th, an important date in Fatima history. God works in mysterious ways. What will we get in the Francis pontificate? It is completely impossible to predict. Will it be horizontal and worldy like Paul VI or deeply spiritual that continues Benedict the Great's restoration of the Mass and Our Lady of Fatima's conscecration of Russia ... or both? I know we are supposed to be thankful for the election of a new Pontiff, but right now, due to the unpredicablillity of Francis, and the confusion about him, it is hard. Plus, maybe I just can't let go of Benedict the Great yet.

Did not Francis say the black and do the red? His way of praying EP III (Pope Benedict's anaphora of choice) was no different from that of his predecessor, and the way he did the elevations was exemplary. He obviously has a problem genuflecting but did not opt for a profound bow - his hands were on the altar indicating that a genuflection was meant. He didn't chant but he has only one lung, and Paul VI and JP II didn't chant much either. Pius XII preferred to celebrate a Low Mass, even on high occasions at the papal altar in St Peter's.

Please, please give this guy a break. The liberals are going to give him a hard time and we must show our Catholicism by supporting him.

Austere?? It just comes off as ignoring all the Organic growth that took place in the Roman Rite until circa 1970. As if Organic growth can only go back to the 70's decade and not before. This austerity has not been seen since the earliest days of the Church, and the Church as grown since then. And Pope Pius XII warned us about trying to return to the earliest forms of Church or liturgical life. To do so would have to ignore centuries if not 1000 years of previous growth. Then rupture will continue.