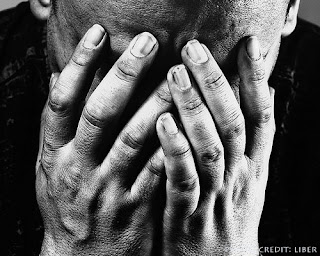 Yes, there has been a great deal of anxiety expressed by more traditionally minded Catholics, in the liturgical sense, about our new Holy Father, Pope Francis.

I think part of the reaction is related to grief and that we have not mourned the passing of Pope Benedict since he didn't die, but actually resigned. There may be a bit of anger over that for some, that he didn't complete what he began or mandate some of what he modeled.

But seeing a new pope has brought home to us that Pope Benedict's papacy in a sense has died and new person stands before us and it isn't Pope Benedict. We grieve! That is good and we haven't done it until now.

The same happens when a long-time pastor is replaced by a new person. Almost immediately there are those who hate or love the new priest depending on their perspective on the old one who is no longer the pastor. Anxiety runs high.

But time heals all.

We will have to let go of Pope Benedict's expertise on the liturgy, his desire for elegance and the trappings of the papacy and beautiful liturgy.

I don't see Pope Francis turning everything upside down in this area for what I see in his style of celebrating Mass is very similar to Pope Benedict who in style was very understated as is Pope Francis. Pope Francis just doesn't like lace, fancy vestments and the like, he identifies with the humble, simple St. Francis of Assisi and with the poor, not the aristocratic.

We are adult Catholics and we can take what comes our way. In essence, Pope Francis will uphold the Catholic faith and morals in a very vigorous way! That is what is important as is the new evangelization.
Posted by Fr. Allan J. McDonald at Friday, March 15, 2013

I think some folks are too worried about a liturgical break with Benedict's liturgical vision. Only 48 hours after Summorum Pontificium, Cardinal Bergoglio had set aside a parish in Buenos Aires for the exclusive celebration of the EF.
I think many people in the US church ignore the fact that Argentina has a strong presence of traditional Catholics (both under Rome and outside Rome). There is a large Pius X Society seminary outside Buenos Aires on the way to the airport.
Some mistakenly think that the liturgy in Latin America is all guitars and colorful altar cloths.

In a letter to the priests among his followers, Francis called for them to wear the finest of vestments, and to use the finest of sacred vessels, when offering the Holy Sacrifice of the Mass. So let's all get over this notion that Franciscans are historically inclined towards burlap and clay pots, for pity's sake! Maybe our new Pope will do the same. After all, he only got the job two days ago.

Well, apparently, Pope Francis just banned Cardinal Law from his own Church. That is a very good sign. Maybe Francis is coming out with guns blazing...

Shouldn't there be a Pontifical style independent of the man? Why must we witness such extremes? Abrupt and unnecessary hurt, fear, confusion and disorientation can in no way be good, no matter what banner it flies under. Changing externals being used as a tool between Progressive or Conservative messages is covert. Better to say what you mean with words and directly and not to allow symbols of the office of the Pontiff to be weaponized. I feel sad for this new Pope as well as the Emeritus. It all seems so unnecessary. The office and symbols of the Papacy have been codified by centuries of use and development and this should not be at the whim of the man occupying the chair. It is too tiring and confusing. Pray for the Church.

Father Pablo,
It was nice to meet you in person the other day in Waycross.

I read about (and mentioned on this blog) the EF chapel and Mass that Card. Bergoglio set up in his diocese only to later learn that it was an EF ordinary with the OF lectionary--not a true 1962 Missal version of the Mass. I also read that it was rather badly celebrated and attendance began to drop off, probable due to these factors (people who are attached to the EF like it, in part, for its precision and uniformity). Nonetheless, I am still waiting to see how things turn out (liturgically) now that he is Pope. I'm not concerned about the doctrinal side as he sounds very forthright and solid.

Father Shelton,
As for the simplicity of Roman chasubles and the self-effacing aspect of ad orientem celebration we need not go so very far back in history (within my lifetime) to see an example of a simple holy and humble priest who wore a simple habit and sandals but who also wore lace-trimmed albs, Roman chasubles and (for most of his priesthood) celebrated Mass ad orientem. That man was St. Padre Pio. His everyday clothing and lifstyle was simple and poor but the Mass vestments he wore (which are about the act of worship--not the man wearing them) were beautiful and befitted their noble purpose.

Priests should not be thinking so much about how they perceive themselves when they don these vestments. It's not about the priest's person and his personal tastes--it's about what he's there to do--offer worship, praise and sacrifice. I believe that versus populum has contributed to this self-consciousness of priests when they offer Mass. It is a disorder that needs to be corrected and we both know a big part of the remedy--ad orientem celebration.

Gregorian Mass, Explain what you are talking about...

It is the new evangelization that matters but "it is in the liturgy that the renewal and reform of the Church begins," a quote attributed to papal MC Guido Marini (age 46) echoing Pope Emeritus Benedict XVI.

In other words, as ol' blue-eyes used to sing, "You can't have one without the other!"

I think the story about Cardinal Law is a hoax or a parody of what actually happened.

Maybe someone can find a true account of what is going on. I've read three conflicting reports on Cardinal Law and the Pope in three different news organizations. More disinformation ...

Gene;
What I meant is why use the symbols and signs of a Pope, vestments, shoes, stoles and the such to make statements about the Church having to go in some direction. There is no reason to strip Papal symbols to send messages to the Church at large. Just as Priests have to don certain garb to say Mass etc., there is garb that is appropriate only to a Pope. To refuse to wear or utilize them, where only a month ago we saw them, is an oblique way to send out messages about the poor and direction of the Church. How does wearing Papal clothing harm or stop the direction of where the Church is going to go under his Pontificate? Traditions go hand in hand with being a Catholic, we are not an evangelical ministry. We have ritual, signs, symbols, arts, and ceremonial that is part of our Catholic Identity. This part of our identity should not be used as some sort of statement that if we utilize it we are somehow rejecting the poor or less fortunate. Or that we are more Holy or Humble because of it. It infers, albeit indirectly that the previous Pontificate did not embody these things. I find that insulting. It seems this is the message here. "I am a humble Pope, therefore I will not do such and such". It is this exact attitude that has tricked down to a parish level which confuses and disorients many, many Faithful. To be able to pick and choose which things we would like to do or observe, and other things which we can ignore at will. If the Pope does it, so can we. Better to make a statement from the Vatican saying "I did not wish, nor aspire to hold the office of Pope with all its' trappings, but I respect such things as part of our Catholic heritage and I humbly submit to my office, as all of the Faithful should submit to their duty to spread and uphold the Gospels and in kindness submit to the fullness of the Catholic Faith" Trappings, Traditions and all. Indeed such trappings often indirectly contribute to the poor. Pilgrims visit the Vatican to see these things and in turn donate, pay for visits to Churches and Museums, which in part the donations and monies go directly to the poor.

Gregorian Mass, You and I are in complete agreement. Thanks.