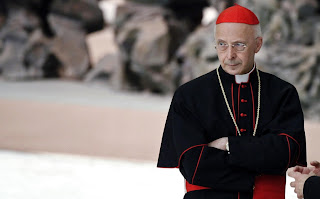 The following is John Allen's summation of the the strengths and weaknesses of Cardinal Bagnasco of Genoa. I am leaving it to the Holy Spirit to decide the election not my clairvoyance because as you know I may not be! But let us pray that the Cardinals put us out of our misery and make their selection quickly. I'm too old for this kind of intrigue and excitement, not to mention anxiety, worry, upset stomach, headaches, pathology, bi-polar, multiple personality and questioning of my clairvoyance which may well be what I am or maybe not! Is there a doctor in the blog, I need help!


The case for Cardinal Angelo Bagnasco as pope boils down to four points.

First, he's seen as someone adept at navigating the shoals of Italian ecclesiastical politics, a figure with friends in all the different camps, who's kept CEI largely intact and avoided any major fractures or embarrassments. At a time when many cardinals want someone who can put the Vatican back in order, that résumé could seem appealing.

Second, Bagnasco's pedigree as a disciple of Siri makes him more than acceptable to the traditionalists in the College of Cardinals, but his profile as a pragmatic centrist also means he could draw support from moderates.

Third, Bagnasco's academic study of contemporary atheism and his capacity to project a reasonable voice for the church in public affairs, unwavering on substance yet gentle in tone, could strike some cardinals as the right fit in terms of engaging an increasingly secular world in the 21st century. He also speaks multiple languages, generally seen as a basic requirement of the job.

Fourth, Bagnasco's history of being a compromise solution to thorny political problems could come in handy. By consensus, there is no clear front-runner in the 2013 conclave, and it's entirely possible that votes in the early rounds could splinter among two or three strong candidates. If none seems positioned to reach a two-thirds majority, heads may begin turning towards a figure more or less palatable to everybody, even if he didn't start out as their first choice.

On the other hand, there are some compelling reasons why Bagnasco might not pass the smell test.

First, there's an anti-Italian humor among some cardinals who see the recent breakdowns in the Vatican as the product of internal Italian squabbles. Reform, in their mind, often means breaking the Italian stranglehold, which doesn't seem to bode well for an Italian pope.

Second, Bagnasco may be recognizable in Italy, but he's not well known anywhere else. Some cardinals may worry about rolling the dice on someone they don't know all that well, especially at a time when the church faces fresh scrutiny amid various scandals, either real or invented, swirling in the global media.

Third, despite Bagnasco's polish and intellectual depth, some cardinals may question how effective he is at moving the ball vis-à-vis the church's concerns. In the recent Italian elections, for instance, Bagnasco and CEI appeared to back Monti's re-election bid, yet the incumbent barely got 10 percent of the vote. If that's the best Bagnasco can do in his own backyard, some cardinals may wonder, what can we expect him to accomplish in other parts of the world?

Fourth, Bagnasco was a player in the surreal "Boffo case" in 2009 and 2010, when the editor of CEI's newspaper was accused of harassing a woman because he wanted to pursue an affair with her fiancé. When it emerged that some of the supposed police documents in the case were fake, conspiracy theories accused senior Vatican personnel, including Bertone and the editor of the Vatican newspaper, of being behind the plot. Bagnasco backed Boff throughout, and later named him director of the bishops' TV network.

Despite an avalanche of commentary and coverage, at the end of the day, the truth of the matter still seems murky. Though most cardinals outside Italy probably weren't paying much attention, there may still be some question marks about Bagnasco's handling of the situation.
Posted by Fr. Allan J. McDonald at Tuesday, March 12, 2013

He is photographed in decent Roman vestments (including pontifical dalmatic) and looks a bit like Pius XII. What more could you ask?

What are the odds that some cardinals would vote for him *because* of the negatives which, if true, would present a sort of leverage of control over him akin to blackmail?

He is my odds on favorite!