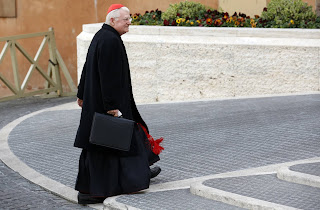 My comments first: The following article was written by Andrea Tornielli on June 22, 2011 and seems to confirm my clairvoyance concerning our next pope, Pope Benedict XVII! I have made bold the important parts of the text.

FROM THE VATICAN INSIDER BY VATICANISTA WRITTEN ON JUNE 22, 2011!!!
Andrea Tornielli
ROME

In fact, the Patriarch of Venice is one of the three Patriarchs of the Latin Church, together with the one in Lisbon and the one in Jerusalem. The Patriarch - a rather widespread title in Eastern and Orthodox Churches – he is a kind of super-bishop, who oversees a vast territory. The title of Venice is linked to the ancient Patriarchate of Aquileia, the cradle of Christian faith in the Northeast of Italy but also in Istria and Dalmatia, as well as in regions such as Carinthia. Technically speaking, therefore, to move from Patriarch to Archbishop, would represent a demotion.

In reality it is not. Venice, in fact, an important historical site, is a rather small diocese with a limited number of priests. Milan, on the other side, is huge, vast, so much so that many times it was thought to dismember it, creating two or three new and smaller dioceses, to make the relationship and contact with the bishop more human.

Another problem, according to some analysts, is the age of Scola, who arrived in Milan on the eve of his seventies. Formally, he will have to resign in just over five years, even if it is possible to foresee an episcopate of at least seven, since his predecessor Dionigi Tettamanzi was also granted a two-year extension which expired in March. Whether it be five or seven, it is still a rather short period, considering the size of the diocese, and the fact that before taking truly decisive action a newly arrived bishop must have at least one year to become familiar with his diocese and his collaborators.

Then again, there was talk of appointing an archbishop to Milan whose origins are with CL, who returns to lead the diocese from which he had to depart, leaving the Ambrosian seminar where certain affiliations, such as the Communion and Liberation movement founded by Giussani, were certainly not favorably looked upon. It is true that in recent years as bishop in Venice, and even before in Grosseto, Scola has shown his ability to be a father and shepherd for all, without favoring one movement rather than the other. But it is also true that CL has its headquarters in Milan, and that men from its ranks are the protagonists of public life.

The why Scola? The main reason is the esteem that Ratzinger has for this theologian who worked with him in the Congregation for the Doctrine of the Faith. The Pope trusts Scola, his capabilities, his preparation. He believes he is the right man for Milan at this moment, even if his episcopate will not be as long as that of his predecessors.

Choosing the Patriarch of Venice to lead the Ambrosian diocese - characterized, remember, by its own liturgical rite – Benedict XVI also wanted to send a clear signal, by putting on a pedestal a valued individual of the Italian Church who, in the early years of the Ratzinger’s pontificate, had been put aside. It is no secret that between late 2006 and early 2007, when it came to naming the new president of the Italian bishops, Cardinal Camillo Ruini's successor, Pope Ratzinger wanted Scola. While in other countries around the world, the bishops elect the President of the Bishops' Conference, in Italy, because of the special bond with the Pope, who is also the Primate of the country, the designation comes from the Holy See and not by election.

Scola was blocked from becoming president of the CEI, a position that could easily be handled from Venice, as Cardinal Angelo Bagnasco of Genoa is doing today, by the then new Secretary of State Tarcisio Bertone. Having recently taken office in the control room of the Roman Curia, Bertone wanted to give a signal of change, hoping to bring the CEI under the protection of the Secretary of State, also and especially with regards to relations with Italian politics. So he opposed the selection of Scola, and eventually a compromise was found with the Archbishop of Genoa.

By sending Scola to Milan now, Benedict XVI expresses his profound esteem for him. Many will read this designation as a mortgage on the future conclave. Almost an indication for years to come, like what happened in 1972, when Paul VI, visiting Venice, took the papal stole from his shoulders, and placed it on the patriarch of that time, Albino Luciani. A gesture that, after the latter’s election during the conclave of August 1978, was interpreted as an investiture. However, these are signals that should not be overestimated, which lend themselves to interesting reading in retrospect, but that do not usually have any actual significance.

The conclave is a matter too delicate to make predictions,(DON'T I KNOW IT!) especially at a time when the Pope, despite his advanced age, is doing well. What is certain is that Scola is one of the "likely candidates". He will be now from Milan, he would have been had he stayed in Venice. But it is not at all certain that the voters of the future Pope, after two conclaves and over thirty years of non-Italian papacy, feel the need to go back to electing a Bishop of Rome born in Italy.
Posted by Fr. Allan J. McDonald at Tuesday, March 05, 2013

Whoever puts on the triple tiara next will undoubtedly be the right man for the job. Surely, we have our own leanings, but in reality, the Holy Ghost will give us what the Church needs at this moment.

It is my prayer that the next Holy Father does not let his ego and fallen nature override his sense of duty to Christ Jesus as his Vicar.

My prayer is not for one particular man, but rather for the Cardinals that that they follow the guidance of the Holy Ghost and accept God's will.