PETER CARDINAL ERDO" STATES THE OBVIOUS ABOUT THE DISCUSSIONS AT THE SYNOD ON THE FAMILY AND THE HETERODOX WON'T LIKE IT, WHICH IS A GOOD THING!

"One of the cardinals leading the meeting seemed to say there could be no surprise in one of its most anticipated discussions -- indicating no foreseeable movement on the church’s stance towards couples who are civilly divorced and remarried." 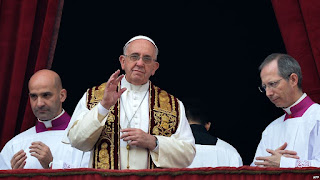 The National Chismatic Reporter (NCR) which does have some good reporters, such as Joshua J. McElwee. This is what he is reporting:

This is from the NCR:

The Synod, the pope said, is not a parliament or a senate, but an “ecclesial expression” of a church “that walks together to read reality with eyes of faith and the heart of God.”

“It is the Church that questions itself on its fidelity to the deposit of the faith, so that it does not represent a museum to be looked at or only to be safeguarded, but a living spring from which the church drinks to quench thirst and illuminate the deposit of life,” the pontiff said of the Synod.

(This the following is a bucket of cold water poured upon the heterodox about the possiblity of Catholics married outside of the Catholic Church in second unions be allowed to received Holy Communion):

Following the pontiff, the meeting was addressed by two Cardinals: Lorenzo Baldisseri, the head of the Vatican’s office for the synod; and Péter Erdő, the archbishop of Esztergom-Budapest who is serving as the synod’s general relator.

Erdő, who is responsible for guiding the Synod’s discussions, dedicated his lengthy remarks to giving an overview of its working document, known as an Instrumentum Laboris.

The cardinal spent a page-and-a-half of his 13-page text addressing expected considerations of Catholics who have been divorced and remarried without first obtaining annulments.

Last year’s Synod is known to have discussed several proposals for changing the church’s pastoral practice towards such persons, who are currently prohibited from receiving Communion in the church. One option often referred to was a “penitential path” that might see such persons work with priests and confessors on an individual basis.

Erdő said a “merciful pastoral accompaniment is due” to such persons, but that it cannot leave in doubt “the truth of indissolubility of marriage, taught by Jesus Christ himself.”

“The mercy of God offers the sinner forgiveness, but requires conversion,” said the cardinal.
“It is not the failing of the first marriage but the living in a second relationship that impedes access to the Eucharist.”

Referencing Pope John Paul II’s 1981 apostolic exhortation Familiaris Consortio, Erdő said “integration of divorced and remarried persons in the life of the ecclesial community can be realized in various ways, apart from admission to the Eucharist.”

“In the search for pastoral solutions for the difficulties of certain civilly divorced and remarried persons, it is presently held that the fidelity to the indissolubility of marriage cannot be joined to the practical recognizing of the goodness of concrete situations that stand opposed and are therefore incompatible,” said the cardinal.

“Indeed, between true and false, between good and evil, there is not a graduality,” he continued. “Even if some forms of living together bring in themselves certain positive aspects, this does not mean that they can be presented as good things.”

Erdő said however that there should be a distinguishing of the “objective truth of the moral good and the subjective responsibility of the individual person."

The cardinal also spoke of the church’s ministry to gay and lesbian persons, addressing the topic of persons with “homosexual tendencies.”

“It is reiterated that every persons should be respected in their dignity, independent of their sexual tendency,” he said. “It is desirable that pastoral programs might set aside a particular attention to the families in which persons with homosexual tendencies live.”
Posted by Fr. Allan J. McDonald at Monday, October 05, 2015

Father
I some confort from tour post but then I checked out Fr Z and Corbinian's Bear for their take on the Oh Dear Leader's speech. I am inclined to find more realistic.

The issue is not dogma changing in the Church, the issue will be praxis, which could undermine the former. Prayers for this mess to get sorted out.

Suppose we passed a law against robbing banks but then let it be known that most bank robbers would not only not be jailed but would only need to pay 10% of their take to the government to settle accounts. Robbing banks would still be illegal, but the likelihood of bank robbery would increase, not decrease as the cost of bad behavior decreases....

What incentive would people have to invest in better marriage prep courses, better catechesis, more extensive training across the board if our 'pastoral' outreach makes it far easier to just blast through 'trial' marriages? Or what incentive would there be for the promotion of chastity in general if the "pastoral" outreach praises people having sex outside of sacramental marriage?

The vast majority of people are LOW INFORMATION, so they will take the pragmatic approach and not go in for the finely nuanced, finely balanced protocols argued for by the Germans for "a process of healing and accompanying". They'll just presume de-facto divorce and remarriage is a-OK as is de-facto fornication and sodomy.

I don't think the circle can be squared. No "God of surprises" can pull the rabbit out of this hat. If we presume no one can possibly give their genuine consent in their first wedding unless exhaustively proven otherwise (so as to justify a presumed status of nullity), we would likewise be presuming that no one is really in their right mind when it comes to sexual morality either.

But it won't stay compartmentalized in sexuality. How many 'get out of jail' cards will every OTHER class of sin get in this new 'age of mercy'?

This synod is likely to be the icing on the Vat II cake. Practice will be to open up to gays and gay couples. Liberal priests will begin doing things like letting gay couples bring the gifts, serve as joint lectors and EMHC's, and have larger roles on committees and lay teaching roles. There will be a move (already mentioned) toward trusting the individual conscience regarding certain moral acts, just like in protestantism. The views on divorce will also change in practice and adultery will become a matter of the conscience of the couple. Liberal/gay priests will feel free to take other liberties...time will tell what they will be. Suffice it to say that, from this point on, choosing a denomination will amount to nothing more than a coin toss because there ain't gonna' be a spit's worth of difference among them. Oh, wait, what about doctrine...doctrine will be the shell of a contentless Church. Ya'll wanted it; you are going to have it.

OnePeterFive has an intersting synopsis of what the outcome of the synod is likely to be:

"The third outcome, about which Cardinal Burke has warned the faithful, is the most likely. Francis will probably follow the example of John Paul II who did not and could not change Church doctrine on the death penalty, yet gutted the teaching by proclaiming that modern times had rendered it virtually unnecessary in practice. Francis will likewise reaffirm the dogma of the indissolubility of marriage while hollowing out its core through some labyrinthine means by which divorced and remarried Catholics can receive communion. The change will be peddled to the faithful as an expression of our Lord’s “mercy” toward sinners. More chaos and confusion will then follow as orthodox Catholics are further divided against each other as they debate the proper response to the new “pastoral” practices, and attempt to reconcile what cannot be reconciled."

"Practice will be to open up to gays and gay couples. Liberal priests will begin doing things like letting gay couples bring the gifts, serve as joint lectors and EMHC's..."

That is an interesting notion.

The DIRECTORY FOR THE APPLICATION OF PRINCIPLES AND NORMS ON ECUMENISM #133 reads as follows:

"The reading of Scripture during a Eucharistic celebration in the Catholic Church is to be done by members of that Church. On exceptional occasions and for a just cause, the Bishop of the diocese may permit a member of another Church or ecclesial Community to take on the task of reader."

One need not even be Catholic to perform a reading during Mass. Therefore, would that situation be any more radical than Anonymous' comment that we may witness the day when homosexuals (openly so) or homosexual couples would "bring the gifts, serve as joint lectors and EMHC's..."?

There are influential Churchmen who are determined to find ways to have us applaud the concept that "homosexuals have gifts and qualities to offer the Christian community: are we capable of welcoming these people, guaranteeing to them a further space in our communities?"

"Are our communities capable of proving that, accepting and valuing their sexual orientation, without compromising Catholic doctrine on the family and matrimony?"

Said doctrine would be upheld on paper, while homosexual couples bring the gifts to the altar during Mass.

That rite could feature the "presider" requesting us to applaud the couple in question for their "bravery" or to demonstrate that we "accept" and "value" their sexual orientation.

Are the above scenarios out of the question?

Pope Francis said that you should "Do unto others as you would have them do unto you".

He could add (for the men who run the Church)..."Do unto women as you would have them do unto you."

Since Pope Francis sees every thing as interrelated, I doubt that he would promote a fracture between doctrine and pastoral practice. Read Laudato Si!

Father, your comment at 4:28 indicates that either you've lost your mind or you aren't paying attention. No one is buying it. Instead of trying to sell your people this nonsense, how about you start preparing them for the reality of the fight and the persecution that is surely coming from without and within the Church?

Read St. Paul in 2 Timothy 4 (1-4). He calls on Timothy; "I charge thee in the sight of God and Christ Jesus....preach the word, be urgent in season, out of season; reprove, entreat, rebuke with all patience and teaching...."

The synod is not following Paul's teaching instead, it is seeking ways to excuse adultery and same sex relations, even perhaps marriage and ultimately, make sin appear as mercy.Diabolical!
anon-1

Read St. Paul in 2 Timothy 4 (1-4). He calls on Timothy; "I charge thee in the sight of God and Christ Jesus....preach the word, be urgent in season, out of season; reprove, entreat, rebuke with all patience and teaching...."

The synod is not following Paul's teaching instead, it is seeking ways to excuse adultery and same sex relations, even perhaps marriage and ultimately, make sin appear as mercy. Diabolical!

I do hope, when the Pope issues his instructions next year he will reflect on St. Paul's admonition to Timothy.
anon-1

Anonymous said..."I some confort from tour post but then I checked out Fr Z and Corbinian's Bear for their take on the Oh Dear Leader's speech. I am inclined to find more realistic."

I don't know anything about the first blog that you mentioned. I have just left Father Zuhlsdorf's blog. I looked for whatever it was that he had said about the Synod that concerned you.

I saw that he was off on yet another vacation. I clicked off his blog immediately as his vacations, and food and drink photos don't interest me. What did he say about the Synod that has made you somewhat concerned about its direction?