CANNOT YOU BE IN FULL COMMUNION WITH THE VICAR OF CHRIST AND NOT ACCEPT EVERY TEACHING OF THE POPE AS DEFINED DOCTRINE? 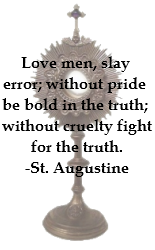 Pope Benedict said that it is permissible not to accept every teaching of the Second Vatican Council insofar as what is not accepted isn't defined as doctrine or dogma.

This discipline is authoritative, but not required to be believed as an article of faith.

So the Church desires to end the bickering of the post Reformation/Counter-Reformation period and enter into dialogue with our separated brethren. A Catholic can be a good Catholic whether he accepts this or not.

So the Church wants to enter into dialogue with non-Christian religions beginning with our eldest brother the Jews. A Catholic can be a good Catholic whether or not he accepts this pastoral initiative.

So the Church wants to enter into dialogue with the secular world and with non-believers. A Catholic can be a good Catholic whether or not he accepts this initiative of the institutional Church.

We can prefer traditional religious orders, big old bulky habits and rigid discipline and still be a good and faithful Catholic.

We can prefer the older Roman Calendar to the new one.

We can prefer a more condemning attitude toward sin, especially sins against chastity and natural law. We might not want to accompany a sinner as he or she might place us in an occasion of sin ourselves.

We may not agree with Pope Francis' concept of "synodalty" or "mercy" and if we do disagree we are still good Catholics.

We can prefer popes who wear all the papal regalia to include mozettas and fanons and still be good and wonderful Catholics. The converse is true too.

The thing we can't disagree on is the two greatest Commandments. When we  become uncharitable to those who agree or disagree with the Second Vatican Council's pastoral vision or the recent Synod on Marriage and Family life's pastoral emphasis, then we have broken the two greatest Commandments. We can't do that and be good Catholics.
Posted by Fr. Allan J. McDonald at Saturday, October 31, 2015

Here's one more thing. We can be good people without being good Catholics.

The trouble is that deceitful reference to VCII has been used for decades to abuse the piety of faithful Catholics. This abuse is such that I'm beginning to think it's best just to leave that council alone for a decade or two while the Church recovers from this abuse. In the meantime, yes, we must cultivate charity.

Church teaching and Theological certainty of

Church teachings, which have been definitively decided on by the Magisterium in an infallible manner

Church teachings, which are generally accepted as divine revelation but not defined as such by the magisterium

Church teachings which the Magisterium clearly decided for, albeit without claiming infallibility

Teachings with low degree of certainty

A well-reasoned teaching which does, however, not arise to being called probable

Opinions tolerated, but discouraged, within the Catholic Church

"But if the Supreme Pontiffs in their official documents purposely pass judgment on a matter up to that time under dispute, it is obvious that that matter, according to the mind and will of the Pontiffs, cannot be any longer considered a question open to discussion among theologians."

"When we become uncharitable to those who agree or disagree with the Second Vatican Council's pastoral vision or the recent Synod on Marriage and Family life's pastoral emphasis, then we have broken the two greatest Commandments. We can't do that and be good Catholics."
I couldn't agree more - this is the best comment I have seen especially about the Synod. Thank you.

The First Commandment says to love God with all your heart and to love him properly. This includes right belief. If our belief is disordered or misguided, then so will be our love for God. If our love for Him is impure, then our belief cannot be right. Proper worship follows from these two things, as well...right belief and right love of God, which moves us to worship Him humbly, with awe, and according to the traditions and forms of worship revealed in Scripture and followed by the Church for centuries...until Vatican II. To chastise people for being "uncharitable" toward two disastrous events in Church history, events which have done irreparable harm to the Church, sown doubt and confusion among the faithful, and pretty much de-constructed the Church even further is tantamount to supporting the enemies of Christ and the Church (those powers and principalities in Eph. 6.) I believe righteous outrage is in order toward both Vat II and the Synod and if some poor weak souls are offended by angry believers who refuse to stick their heads in the sand and who want to fight back, too bad. Go hug a tree, then find a Giant Sequoia to sit under while you read Jonathan Livingston Seagull...or Laudato Si...not much difference.

I read somewhere that it was the desire of Pope St.John XXIII that no new infallible teachings were to come out of the Second Vatican Council. Documents of that council in certain parts, do of course refer to previous infallible teaching.

Well, George, none did or we would all be down at First Methodist having joint services, leaving "He descended into Hell" out of the Creed, and singing "What A Friend." We may get there yet.