ANOTHER RISING AFRICAN CARDINAL STAR WHO COULD WELL BE THE NEXT POPE PROVIDING REAL SYNOD LEADERSHIP AND STRAIGHT TALK! 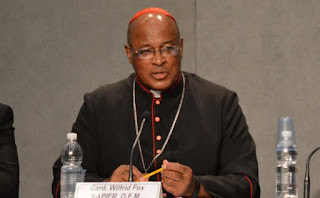 The Holy Spirit is at work folks; nothing to worry about, the devil isn't stronger than Christ. The battle is won in eternity, just playing out now in time! Make no mistake, the Magisterium will never defect from the truth! I'll eat my biretta over that! Those who have loss their authentic Catholic faith and give into the negativity of the devil, one of his primary tools, don't understand what I've just written because of their lack of true Catholic faith that is always based upon faith, hope and love.

ROME, October 9, 2015 (LifeSiteNews) – South African Cardinal Wilfrid Napier, a leading cardinal on the organizing committee for the Synod on the Family, issued a pointed critique on Twitter of a controversial report on the Synod by the Vatican’s English-language spokesman, Fr. Thomas Rosica, in which the priest emphasized that the Church should “embrace reality” in dealing with sinful situations.

Rosica’s summary of Synod fathers’ addresses at Tuesday’s press briefing was criticized for its emphasis on liberal proposals and the strong language he used to describe them. The remarks fueled ongoing concerns from last year’s Synod about the manipulation of the message by the Vatican press office and the Synod’s organizing body.

After the press conference, Salt and Light TV, Rosica’s Toronto-based media organization, tweeted out a link to an article about Rosica’s remarks, saying, “Fr. Rosica Speaks on Synod Delegates, The Need to Embrace People Where They Are.”

In reply, Napier tweeted: “‘Meet people where they are’ sounds nice, but is that what Jesus did? Didn't he rather call them away from where they were?”

At Tuesday’s press conference, Rosica had said, “There must be an end to exclusionary language and a strong emphasis on embracing reality as it is. We should not be afraid of new and complex situations. … The language of inclusion must be our language, always considering pastoral and canonical possibilities and solutions.”

Napier has been among the more outspoken tradition-minded Synod fathers. His criticism of last year’s controversial interim report at the Synod, given at a Vatican press conference, made international headlines. "The message has gone out and it's not a true message," he said. "Whatever we say hereafter is going to be as if we're doing some damage control."

Toronto Cardinal Thomas Collins spoke on a similar theme as Napier’s tweet during his intervention at the Synod this year, emphasizing the need to promote repentance and conversion while the Church accompanies people. He described his three-minute speech to Catholic News Service on Thursday.

"The truest compassionate mercy is a compassion that challenges," explained the cardinal. He said meeting people “where they are” comes first, "but that is only the first thing. The second thing is to help them become what God wants them to be."

"Just to have accompaniment as people are moving in the direction away from the Lord is not enough. We need to be with them in order to help people to follow our Lord,” he added.
Posted by Fr. Allan J. McDonald at Friday, October 09, 2015

Has anyone suggested that the Magisterium will defect from the Truth? Who are these people that you're talking about who believe that the devil is stronger than Christ?

"Meet people where they are," "stay in their frame of reference," etc. are all 70's psycho-babble talk to help people not change.

The question is, WHY is the Vatican permitting (and apparently supporting) Fr. Rosica in the first place? While I am glad that Cardinal Napier is doing this, this story begs far more questions than it answers. This kind of contradiction and uncertainty cannot be a good thing.

Marc, The Magisterium will simply be ignored as pastoral practice changes and the Church joins the spirit of the age. Lip service will always be paid to doctrine, etc. That is how the game is played. Whatever documents come out of this ridiculous farce will be vague and subject to various interpretations. There already is no enforcement of doctrine/dogma on many levels..this will just continue with less worrying about it. Everybody will be happy and things will be fine.

So, it is incumbent upon Catholics to believe that the Magisterium cannot and will not defect. But there is an attempt being made to convince us that the pope is the Magisterium and that, as such, he cannot defect from the Truth. That logic would mean that whatever the pope declared would be binding since it would necessarily be true.

Of course, as Catholics we know that that is not the Catholic teaching on the papacy. It is, though, the danger of papal positivism coming to fruition in reality.

Fr. Rosica is not saying anything that Pope Francis isn't allowing him to say. Otherwise he would have been fired. He is contributing to the confusion and chaos.

My crystal ball tells me that there will be no definitive statement from the synod. The will say discussion must continue and have another synod. meanwhile doctrine will be undermined, yet not doctrine will have been officially changed. Evil. Pure EVIL. And who is allowing it????????

Fr. Rosica was the guest speaker at a lecture our college board hosted a few years ago. His tone during the Q&A portion of the evening, as was the content of his responses, was frequently and needlessly dismissive and/or condescending, and confirmed his attitude that we experienced during the dinner reception prior to the lecture.

Fr. Rosica's very public actions (threatening a lawsuit against a critical blogger, biased editorials, supportive (sycophantic) interviews with dissenters) since that meeting have reinforced for me that Fr. Rosica is all about Fr. Rosica. His agenda, expressed very clearly and completely in the aforementioned lecture, was nothing less than a manifesto of liberal-religionist thought that hardly conveyed obedience to the Magisterium of the Church. I, for one, was embarrassed that we had invited a lecturer who is only tenuously faithful to the Magisterium and only then so when it serves his immediate purposes.

Thanks be to God for Cardinal Napier's rapier riposte.

—from a reader north of the border.

Most people don't know what we know about God, the Church. We want to proclaim the Truth and most people won't comprehend it. It seems that Pope Francis is encouraging all sides to speak so that Truth will be revealed. A technique I have used for many years is to allow the opposition to speak and run their ideas to conclusion. They should write them down. Then the flaws become evident and the right choice can be made. It isn't easy being patient when you have the right choice in mind. But allowing the error to develop itself in public strengthens my understanding of the correct choice and permanently cripples the wrong one.

Indeed, Marc. I keep telling people that the Magisterium trumps the Pope, but Popolatry is the latest thing.

"Napier tweeted: “‘Meet people where they are’ sounds nice, but is that what Jesus did? Didn't he rather call them away from where they were?”"

Well said and what a succinct way to sum up Our Lord's attitude to sinners.

Apparently there will be no vote taken at the synod to show which bishops voted for what but merely a paper put out by the Pope himself. The fact that there is no vote would indicated to me that the liberals would be defeated in any vote so I question the Pope's way of handling this.

Apparently the day after Cardinal Pell spoke at the Synod Pope Francis rose to say the bishops shouldn't dabble in conspiracy theories. Any way you look at it, though, Francis does lean towards the liberals. Cardinal Pell's comments for example have show that many at the synod think that:

"Monday evening, October 5, Pell suggested that the membership of the special commission (SC) of ten persons chosen by Pope Francis to write the synod’s final document should be expanded. Drawing attention to the crucial role that the SC will have, he argued that it does not have a sufficiently broad spectrum of members, from the different regions, and proposed that its composition be “expanded” with other members elected by the synod assembly.

Sources say that underlying Pell’s challenge, though not explicitly stated in the synod hall, is the view that a majority of the ten members chosen by the pope are moderate, or are perceived by some as not sufficiently robust in defending the church’s doctrine on marriage and the family. Those who hold this position suggest, imply or allege that as a result of this composition the final document may not hold firm on traditional church teaching. (Interestingly, a somewhat similar position appeared the day before Pell spoke in an article in the American review, First Things, written under the pseudonym Xavier Rynne II.)."

Therefore, despite what many say on this blog the Pope tends, perhaps for a mistaken view of mercy to favour liberalism. I think the only thing we can do is wait out this papacy and pray for a holy Pope to restore the Church from the mess that this papacy has gotten the Church into. No matter what people say about misquotes and other things the Church in modern history has never seen a papacy like this.

RCG I think you hit the nail on the head. Pope Francis is street savvy and smart. He knows as a Jesuit and I suspect from the South American culture and his Italian culture, when combined with the South American one, puts both on steroids, that it is good to talk things out and to let opposing voices come to the fore or else these errors stay hidden as they have now for two previous pontificates, but still causing havoc to the Church.

Pope Francis is pastoral and most bishops and priests I know who do parish work are pastoral and know they can't control people's lives and the ones who are engaged in the Church and actually go to confession while not perfect are trying their best. So cut these people some slack. I happen to believe that whatever slack is cut should be private, confidential and under the seal of confession.

There has always been a divergence from the perfection of morality as taught by the Church and the sinner,always! Those who are not priests, don't hear confession and aren't involved in any significant way with the actual struggles of people to live a decent Catholic life either make want to laugh or throw-up.

German Archbishop Koch says that the Church's stance on divorce "makes people doubt God." Where did the Church find this collection of ninnies, feebs, and carrot cases to have a synod?

I think Pope Benedict elevated him to cardinal as with most cardinals at the synod, but not all because of the length of Pope St. John Paul's time as pope.

Rcg, you bring up an interesting perspective. I hope indeed that what you are saying is what the Holy Father is up to. Or, if not that, then hopefully the Holy Spirit will guide the Synod that direction. As far as what you say about people not comprehending the truth, isn't it more them not accepting it? I know that the former needs the Holy Spirit, but He works in conjunction with our rational intellect (faith and reason). For those who are impaired intellectually, the grace of God supplies. The latter, however, the accepting of Divinely revealed Truth, is totally dependent on grace.