MORE AND MORE PEOPLE ARE AGREEING: POPE FRANCIS IS LETTING ALL THE POISON THAT LURKS IN THE MUD HATCH OUT! 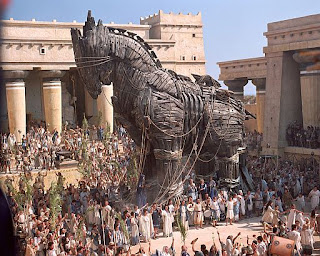 I see on another blog from Europe that there are those who agree with my assessment that Pope Francis is ingenious in allowing the enemies of the true Faith to have their say at the synod. We are in fact in a epochal battle between two schools of thought as it concerns the direction of the Catholic Church and they are symbolized by two theologians, one who went on to become Pope Benedict and the other who had his status as theologian stripped by Pope St. John Paul II (made a saint by Pope Francis BTW), Fr. Hans Kung!

Pope Francis is stealthy. The battle was not won and the wolves of the Kung ideology tried to destroy Pope Benedict's papacy with the help of the hateful liberal press. The reams of documents publicly given to Pope Francis by Pope Benedict (pictured below) highlighted the depth of the crisis in the Catholic Church and the Vatican and how insidious the left or heterodox are as represented symbolically by Hans Kung. 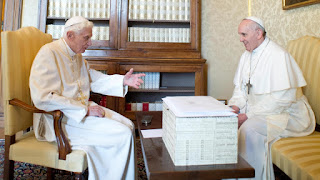 Of course, Pope Francis, a great believer in the fallen angel, Lucifer, and His Holiness preaches on him often, invited Pope Benedict to the blessing of a statue of St. Michael the Archangel that was placed in the middle of the Vatican! Do you think the photo above and the one below aren't related? 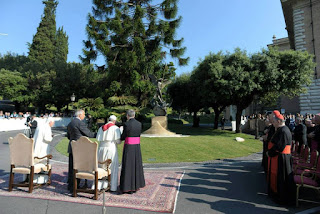 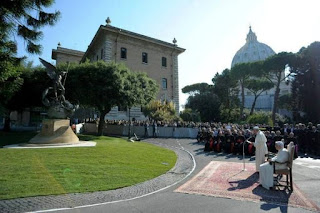 Pope Francis' tactic is stealthy and I think this European blogger captures it succinctly!!!:::

When the Faith is proclaimed, a German bishop cries:

As well they should. They’ve overplayed their hand. They should have settled for the continuing, incremental slide into indeterminancy, but Pope Francis (wittingly or unwittingly) drew them out from their cultural cover. Check the old story of the “feigned retreat” at the Battle of Hastings. Now that it’s open warfare, they lose.

Or as a Roman Emperor was once rumoured to have said, “Let all the poison that lurks in the mud hatch out.

(Above commentary by Hilary White is an Anglo-Canadian, who started researching, writing and lobbying in the political end of the pro-life movement in 1999, moved to Rome in 2008 and covered Vatican and European news related to "life and family issues" from a Catholic perspective until May 2015. She lives with her three cats and garden in the Peaceable Kingdom of Norcia, in Umbria, where she chants Vespers in Latin every day, and refuses to go to Rome for any reason whatsoever. She hopes the world does not end before she can get the last of the tomatoes in.)

My final comments: Progressives in the Church have always promoted the "sense of the Faithful" (sensuum fidelium) when it suits them, meaning the Faithful oppose this, that or the other concerning Catholic morality and thus the Magisterium should follow their lead and let the dissenting Faithful "bring them around."

In an interview with Fox, Father Thomas Reese of the NCR shows his hypocrisy and that of the progressive wing of the Church when he chastises the "sensuum fidelium" of African laity and its culture which upholds the Church's teaching on unnatural sex and marriage. Yet, Father Reese holds up an African bishop who is open to western views on this as one who is "trying to bring his people around." Of course Fr. Reese is spinning the particular African bishop of whom he speaks and actually misrepresenting him. But what the heck!

Father, those who think along the lines you describe above appear to me to be described well by Ross Douthart in his New York Times' column:

"some Francis-admiring conservative Catholics, a few of whom have constructed elaborate narratives in which the pope has been merely giving Kasper et. al. the theological rope to hang themselves. But it strikes me as as deeply unrealistic and implausible and evidence-free. Again and again, Francis has shown effective favoritism toward the liberal view; again and again he has tried to position himself as a mediator between upholders of doctrine and would-be modernizers. On other questions — women as priests, for instance — he has been quick to say “John Paul II settled this,” but not on remarriage and communion; here, to the contrary, he has spoken favorably of new possibilities from the very beginning of his pontificate. The Holy Spirit might persuade him to reverse course, but the evidence we have suggests that a simple reaffirmation of church teaching is not what he intends."

I agree with Ross Dothart that what you say is an elaborate construct. I only wish that were the case.

Ya'll see that Trojan Horse? Know what is inside it? Vatican II. The very fact that these synods were called means we are witnessing the end of the Catholic Church as it has been known for centuries. I don't think there will be any great earth-shaking declared schism. The Church will just continue as she now is...fragmented, directionless, empty of meaningfully embodied doctrine...a social organization and tool of the progressives, who will continue to lie and pretend they are believers. Devout Catholics who have some insight will gradually drift toward SSPX and other bodies like them...some will become protestants or just ditch organized religion altogether. There are theological reasons for this, buried deeply within Thomism and within post-Enlightenment Catholic theology. These are the issues fought over primarily by Calvin and the Catholic Church of his day. The Counter-Reformation addressed many of these issues, and Calvin's answers are not completely satisfactory, either. I think we would have to go way back to Augustine to fix things. We may thank the whore, Reason, for all our troubles.

Thanks Clyde for pointing out something I had not thought of in terms of the Holy Spirit, that He is testing Catholics and the ones you describe are the very ones who flunk at their baptismal promises and by going into schism with the Pope and bishops in union with him condemn themselves to hell or at least open themselves at a very, very, very difficult judgment at their personal judgement.

Knowing Catholic truth about how apostasy of the individual believer works, when they separate themselves from the pope and bishops in union with him (the successors of the apostles) is very important and so few in the post Vatican II era know this or worse yet know it but do not believe it, perhaps like Clyde and others like him who make such disparaging and negative comments compulsively which tells me that more is at work than just sin on their part, perhaps the influence of Satan as they seem not to be able to control themselves in this regard.

So, you think it is us believing Catholics that the Holy Spirit is judging? That is, indeed, an interesting perspective. What if the Pope and the Bishops in union with him are heretics? It is not the devout Catholics who are clinging to the Devil's coat tails. Just how far will you follow this Pope whom you worship?

The following is intended as a comment on the general climate, not a specific criticism of Fr. McDonald.

I entreat everyone here to remember that (while I can't speak for everyone), there are at least some people here--such as myself--whose reactions to Francis and the Synod and the NO aren't based on hatred of the new and longing for the old out of some nostalgia, but a genuine inability to understand how the new comports with the old. And the hierarchy has repeatedly refused to help us understand. If we can't reconcile new and old, then due to the law of noncontradiction, either new or old must be wrong (and perhaps both are wrong). This calls into question the very nature of the Church (and thus our salvation). Thus, in order to reassure ourselves, we go with doctrines that have been taught and raffirmed by multiple generations over the course of centuries or millennia (and thus are insulated from the changable spirit of the times or faddishness) rather than an upstart recent tradition that has undeniably spawned myriad abuses along with radical, revolutionary change and (here's the key point) refuses to demonstrate how it squares itself with the prior teaching even while claiming that _is_ consistent with this prior teaching.

We want someone to help us, to explain to us, to teach us. WE ARE AFRAID FOR OUR SOULS. It doesn't help at all to be yelled at and accused of being schismatics or heretics when we bring this up. If nothing else--if nothing else--that is terrible pastoral practice.