IS POPE FRANCIS A PAPAL GENIUS? GIVING HIS HOLINESS THE BENEFIT OF THE DOUBT! 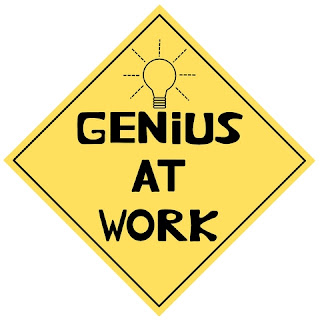 Because of the new media and the fact that cardinals and bishops now have joined the "comment" section of the modern new media culture in how they communicate with one another (ugly, shrill and undignified), we know more now about how the sausage making of Catholic synods and Councils work. It is similar to some parish councils, I kid you not (but not mine; I rule with an iron fist, but below that fist might be festering resentment).  It is not very edifying.

But what has happened at this synod and the last is something that Popes Paul VI, John Paul II and Benedict XVI would not have allowed. They would have ruled with an iron fist and not put up with ugly comments directed at each other by cardinals and bishops.

But because of that iron fist, divisions and polarization festered under the facade of tranquility and agreement, a faux unity as it were.

While I am not clairvoyant, although some say that I am, I believe that Pope Francis will issue a document of some kind in the coming months, probably before the Year of Mercy begins December 8th.

He will be what the word "pontiff" means, a bridge builder between the polarized forces in the Church which we now know includes cardinals and bishops as well as the laity.

But he will bridge the gap between orthodoxy and heterodoxy.

Here is a good article by Mary Jo Anderson of Catholic World Report well worth reading:


Synod work has slowed slightly, as the bishops digest the reports of their small language based discussion groups. The official schedule is now about a half day behind. It's remarkable that, considering the gravity and depth of their discussions, that the schedule is only a few hours delayed. And, this is good. It means that bishops have taken the task so seriously that a pause to insure better amendments, more discernment and consultation may yet bring forth a final document, based on the Intrumentum Laboris, the working document. As it stands, that is not a certainty.

Closer analysis of the third edition of the small group reports (which corresponds to the three parts of the Instrumentum Laboris) indicates no expectation that there will be any pastoral change in favor of the “penitential path” for divorced and civilly remarried to receive Communion. A majority of bishops recognize that admitting “irregular relationships” to Communion is an assault on the entire sacramental economy and the theology of grace. Furthermore, if the Church can ignore Jesus’ own direct teaching on marriage, it raises the question, “Who do you say that I am?”

That's the bottom line of this entire synod: major issues that affect families worldwide were simply overwhelmed by the “euro-centric” gambit to achieve “flexibility” for sexual relationships outside the teaching of the Church.

The much discussed “Kasper proposal” is favored, at best, by about ten percent of the bishops gathered for the Synod. Some modified version might be accepted by another ten percent. But even that will not salvage the plan put forward for two years by the “reformers.” A two-thirds majority is required for a paragraph to pass into the final document. As one Vaticanista quipped, “Even Kasperites can count.”

Those who have followed the Synod deliberations will perceive that the likely failure of the gambit is a great relief for orthodox Catholics, but an equally great disappointment for “progressives” who have held exalted hopes of change, at least in pastoral practice. To review briefly, the “Kasper Proposal” is Synod shorthand for three main changes in pastoral practice: re- admittance of divorced and civilly remarried Catholics to Communion, some accommodation for cohabiting couples who hope to marry, and some “opening” to homosexual pairs. The latter was always a nebulous proposition. The assumption has been that “opening” to same-sex pairs was intended as a bargaining chip that would be jettisoned if compromise could be found for divorced and civilly remarried.

Still, those proposals have the sympathy of much of the secular press who have built an expectation that under this pope the Kasper Proposals would find an advocate. During today’s Vatican press briefing there was agitation; tense questions were aimed at Cardinal Gracias of India who serves on the document drafting committee. Reporters realized that the votes simply aren't there, but perhaps the reason is the process (a process that, coming into the Synod, seemed to favor their goal). Most questions addressed to Cdl. Gracias targeted the methodology that will result in a final document: Who was chosen to collate the amendments from the small groups? Who will decide on the exact wording of amendments? Why is “old” theology like Familiaris Consortio cited? Will some accommodation be achieved, such as pastoral emphasis on an “internal forum” concept of conscience be in the final document?

The fate of the final document hinges on the work of the draft commission, huddled together today until the early evening. The Herculean task of the commission is to faithfully incorporate the 1000+ modi ( amendments) from all the circoli minores into their draft. Many of the modi overlap, but even weaving together 300 or so different amendments to the working document is daunting. It is reportedly nearing a hundred pages. However, the overarching question isn't if the work can be completed,rather can it find wording that is acceptable to two-thirds of the bishops?

Tonight, in the Synod Hall, the first draft of the final document will be summarized by Cardinal Erdo, in Italian with simultaneous translation. Bishops will be given a written copy of the draft, in Italian, to take to their rooms and review overnight. (There is also whispered expectation that the draft will be leaked to the press.)

The use of Italian is another element in the fate of the final document. Joan Lewis, EWTN’s Vatican Bureau chief, mused today about the explosive situation caused last year by a poor translation of the Extraordinary Synods’s mid-term report. It contained a controversial proposal to welcome and “value” the contributions of homosexuals. The secular journalists latched onto that concept of “valuing” practicing homosexuals in the Church. There were headlines whirling around the globe announcing new “opening and valuing” of gay persons by the Catholic Church.

To make the situation more combustible, that mid-term report had not even been seen by the bishops yet. A copy was given to the press, but had not yet been given to Synod participants. When they had frantic calls from home dioceses about web reports permitting “Gay is OK!” bishops blanched. The following day, Cardinal Napier of Durban, during the daily briefing to press, said emphatically that the bishops had approved no such proposal. Some journalists grew indignant: it was in the text. “Yes” Cdl.Napier replied, but that text had not been seen by the bishops, and as it turns out, the translation was faulty. The Italian word for “evaluate” had been translated into English as “value.”

This spongy language situation rests on those responsible for the translations. And presumably, in their rooms tonight, bishops won't have translators standing by.

Those who yearn for relaxed pastoral approach for persons in “irregular relationships” won't be folding their tents, however. In small clutches in the Sala Stampa (Vatican Press Office) reporters for progressive Catholic publications discuss the “Synodal Church” which is code-speak for “the discussion isn't over.”

Increasingly we’ve heard from bishops—see Archbishop Chaput's most recent column, for example—that the unexpected result of the Synod has been the intense sharing among bishops, a heightened fraternal spirit, a true experience of synodality. Despite the battle described above, the majority of bishops have found confederates from a continent away. There is no quicker manner to form friendships than to work intensely together for three weeks. For, if no final document is reached, or if Pope Francis thanks everyone for their work, but chooses not to produce a post-synod exhortation, what was this Synod about? Only heaven knows,but one terrestrial suggestion has been that when the next conclave meets, these men will already have taken the measure of their brothers.
Posted by Fr. Allan J. McDonald at Friday, October 23, 2015

'He will bridge the gap between orthodoxy and heterodoxy'. How can he, since there cannot be a middle way between the two? Either something is true or it is not. The Church may leave some questions open, but she does not admit of half-truths.

Attempts to equate Pope Francis's policy with that of Chairman Mao - let a hundred flowers bloom, let a hundred schools contend - which enabled the old monster to flush out the opposition so that he could turn on them, are just plain silly.

You cannot bridge the gap between orthodoxy and heteredoxy without compromising the Faith. If the Pope thinks he can, then he is far, far less than a "Papal genius" and probably closer to something lower on the intelligence scale. This entire notion of compromise with secular humanism and heterodoxy that has been floated by Vatican II and the aftermath needs to be erased and condemned. Nothing good will come from this Synod unless it is a total disgust and rejection by faithful, believing Catholics. The very fact that it was called, regardless of whatever meaningless document it comes up with, is a further indication of the weakness of the Church in the face of a secular, progressivist onslaught. We need warriors for the Faith and Christian culture, not garrulous nambie pambies who tremble at a raised voice or an angry comment, or walk on eggs for fear of offending some deviate, criminal alien, or pervert.

At the turn of the first millennium the Church was in great need of reform. Into the arena in 1046 strode the German King Henry III, a warrior and a man of deep piety. He surrounded himself with bishops and men of learning. Over ten years he appointed a series of popes (all German) committed to the renewal of the Church in general, and the See of Peter in particular. The greatest of these was St Leo IX (1049-1054). In five years Leo travelled to Germany, France and northern Italy, holding a series of great reforming synods, attacking the abuses of simony, lay investiture, and clerical marriage and concubinage. Bishops were deposed and excommunicated. Berengar of Tours (an earlier incarnation of Schillebeeckx with heretical views on the Eucharist) was condemned.

In taking his reforming campaign into southern Italy Leo ran into hostility from the Normans and the Byzantines, but his successors continued the reform and the papacy was the spearhead of it.

What has happened in the last millennium? Well, 'reform' nowadays doesn't mean the promotion of orthodoxy - quite the opposite in fact. The Germans are now the bad guys. Synods have a rather different role. As for the papacy ...