WHO LEAKED THE LETTER? A PLOY THAT WILL BOOMERANG???

Below I print commentary from the blog of John Thavis who covered the Vatican for 30  years while working for Catholic News Service. He wrote the book: 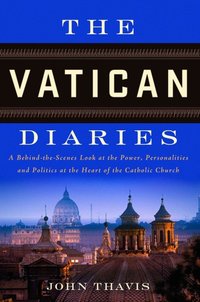 I am not sure that his premise that the 13 cardinals, more or less, compromised their concerns by writing a confidential letter to the pope highlighting their concerns rather than bringing it to the table of the synod in a public way is right.

But I did not make the connection that Pope Francis' unusual intervention on Tuesday last week was in any way motivated by this letter, but it does seem to be a slap-down of these cardinals now that I read John Thavis' commentary.

The greater concern, though, are these damn leaks and who is doing it, either to discredit the pope or the cardinals who wrote the letter. John Thavis makes the claim that in this regard much hasn't changed since Pope Benedict's abdication.

Who is leaking and what are their motives and who is behind it? Where is the Bob Woodward of the Catholic Press, John Allen, putting a "spotlight" on this, after all he works for the Boston Globe!

Here is John Thavis interesting take on it all:


A ploy that will boomerang

As the smoke clears, somewhat, over the “Letter of the 13” cardinals to Pope Francis regarding the Synod of Bishops, a couple of things stand out.

First is that some synod participants – a small minority, it appears – don’t trust the synodal process as modified by Pope Francis to be fair or collegial. They chose to raise the issue in a private letter rather than on the floor of the synod; that set a political dynamic in motion, one that was easily exploited.

Second, despite Pope Francis’ reform efforts at the Vatican, the culture of leaks, manipulation and power struggles is still very much alive in Rome. Indeed, at times this week the clock seemed to have turned back to the final days of Pope Benedict’s pontificate, when petty scandals and internal conflicts became such an embarrassment to the church.

We still don’t know exactly what the letter said, but by most accounts it included objections to the process by which the synod’s conclusions will be expressed, specifically the role of a 10-member writing commission appointed by the pope. The suggestion that Francis cannot be trusted to select an unbiased editorial group and to guide the synod to an honest conclusion is rather astonishing.
The letter also warned that a synod that was intended to reinforce the church’s teachings on the dignity of marriage and family could end up being dominated by the issue of Communion for divorced and civilly remarried Catholics.

Maybe Pope Francis does not believe that raising these issues is out of line. After all, he has said repeatedly that he wants to hear directly from those who disagree with him. And the pope, in fact, appeared to respond to the letter-writers in two ways: by having the synod’s secretary-general explain the procedural details more fully, and by saying himself that the synod would not change church doctrine on marriage, and was far from a single-issue discussion on divorced Catholics.

The pope also pointedly cautioned against what he called a “hermeneutic of conspiracy,” by which I can only suppose he meant the eagerness to embrace the rumors that this synod has been “rigged” from the start.

In effect, I think the pope neutralized these objections with his unexpected words to the synod, which came a day after the “Letter of the 13” was hand-delivered to him.

And that’s precisely when the move to “leak” the letter – or a version of it – was made, clearly an attempt to make it look like the pope was facing an internal revolt. The wheels began falling off this maneuver almost immediately, when several cardinals denied having signed the letter and others said the content was mistakenly reported.

Today, the Vatican spokesman, Father Federico Lombardi, said the leak was a “disruption” to the synod that was not intended by the signatories, and that a very positive atmosphere reigns at the synod.

My reading of all this is that the ploy has backfired. I suspect most synod participants are not amused at this rather obvious attempt to pre-emptively discredit the synod’s outcome.

As John Allen has said, all previous synods were "manipulated" and their results were foreordained by those who were running things.

It just happens that, in the past, if was the conservatives who held the reins.

Now that the progressives are in charge, the cries of "manipulation" sound a bit hollow.

Two things on Thavis' article: (A) how does he know only a "small minority" object to the rigged biased anti-collegial procedures of this Synod? (B) As for trust that the Pope can choose an impartial group to draft the final report -- just look at the names and professed positions of most of the people on the committee. There is incredible imbalance and skewing toward the Kasperite heretical positions. "Res ipsa loquitur," as one learns in law school, the thing speaks for itself.

'The suggestion that Francis cannot be trusted to select an unbiased editorial group and to guide the synod to an honest conclusion is rather astonishing'. After last year's proceedings it's sadly not astonishing in the least. If cardinals as senior as Müller and Pell are unhappy with the make-up of the committee which will draft the final Relatio - assuming a) there will be one and b) it hasn't already been written - this is a serious matter. The Pope appointed them, and so the spotlight is on him. John Allen wrote before the synod opened that Francis would face an 'uphill climb' to get the outcome he wants.

I also note that Archbishop Bernard Longley of Birmingham (England) has come out strongly against a proposal being discussed this week, and believed to represent the views of the Kasper-Marx faction, that non-Catholics married to Catholics should routinely be admitted to Holy Communion. ++Longley is co-chairman of the Anglican-Roman Catholic International Commission (ARCIC).

What exactly is the point of this synod? Is it to do what Christ demanded, namely preach the truth of the Gospel in season and out. Or is it to find some kind of loop holes to let people remain in sin and not pick up their cross and live heroic Catholic lives?

If the pope and the bishops aren't going to uphold the teachings of the Church in practice as well as belief then what is the point of being a Catholic. Just tell everybody to continue doing whatever you want as long as you send in your check every month. Because that is what this evil is all about....money. The European churches want to appease everyone in order to get more tax money. I guess the German bishops don't think a salary of $12,000.00 Euros a month is enough. These people do not believe in the Catholic Faith or they wouldn't be doin these scandalous evil things.

What possible "outcome" could the Pope want?

The Kasperite plan is obviously heretical. One cannot square the circle of adultery with a "period of penance" because after any period of penance the state of violation against one's vow to God REMAINS! It'd be like going to confession of being a drug dealer. One undertakes a series of penances but continues to sell illegal drugs with absolutely no intention of stopping. What would the point of penance be if one is not going to stop one's state of objective rebellion from God's covenant?

Secondly, NOWHERE is it shown that the status quo is heavy handed and meanspirited and causing vast turmoil globally. The Germans certainly can't prove that the status quo is the cause of the defection of 90% of their members. If anything people abandoned the faith en masse in the 1960s sexual revolution. You are not going to 'win' them back by watering down discipline or doctrine. They have chosen to follow other gods.

So what is the crisis in the family? Certainly not gays. Less than 1% of the Catholic population is no reason to call for a synod. Divorce and a culture of contraception is a major problem. But calling divorce and remarriage a de facto blessing is no solution. Neither is turning a blind eye to innumerable couples' contraceptive mentality.

I suspect that the letter was leaked by someone who signed it, simply to show that there is concern with the synod from some of the top Cardinals because nothing but the liberal agenda is being published. The content of the letter has reflected badly on Pope Francis and on the manipulators of the synod. I have noticed that, since the publication of the letter, priests have begun speaking out against communion for the divorced and civilly remarried. The fact that the 13 were prepared to stand up and be counted has galvanised others into action. They have shown leadership at last. Deo gratias because it will undercut to some degree those manipulating the synod. Can the Church, for example, afford to get offside with a large number of US bishops and Cardinal Pell is well thought of in Australia too. Bishop Athanasius Schneider and Cardinal Pell have been speaking all around the world to the priests and the faithful and shoring up Catholic teaching and doctrine. I believe that is the only way to overcome this evil.

The liberal global media is ginning up the expectation that the synod is about the cool, hip, awesomely awesome liberal Pope Francis (cheers) vs. the meanspirited, old, white, patriarchical, uncool dinosaurs (boo, hiss). And that we ought to expect serious changes in doctrine.

The liberals totally grasp that personnel is policy. That practice leads to change in justifications. De-facto change leads eventually to an ex post facto doctrinal change. That's why they were so keen on fighting for altar girls. They will simultaneously bleat that it's no big deal and squeal that it's impossible to change. They grasp that seeing women in albs or other priestly, clerical garb MATTERS.... it sets up expectations among the low information crowd (nearly everyone) and ratchets one click closer to their goal of priestesses.

Ditto with 'symbolic' positioning of openly gay or flagrantly sinful straight people in prominent positions within the Church or liturgy. It's all about optics and the blessing by association....eventually they reason, people will be blasé about open scandal and the ratchet will go down another click to total acceptance of sodomy and open promiscuity.

We have our lives of the saints to inspire us....they have their unending parade of PC heroes and rock stars whom the means of propaganda lionize at every turn as the most awesome of awesome people evah.... theirs is only always fantastic. Ours only always meanspirited etc. it's a pretty good bit of psych-ops we've been pummeled with over the past 2 decades and it'll only get more intense.

Now is the time when the 1 in a thousand leader will stand out and do yeoman's work in rallying the faithful to the deposit of faith. Now is the time for men to stand up "athwart history" (which is when all is said and done, merely "other people") and yell "stop in the name of the Lord!".

Christians have halted "historically inevitable" declines before. Lots of times in fact. It's practically our specialty.