FATHER LOMBARDI ISSUES CLARIFICATION ON KIM DAVIS' MEETING WITH POPE FRANCIS; THE FACT REMAINS THAT THE HOLY SEE WITH THE KNOWLEDGE OF POPE FRANCIS INVITED HER TO THIS BRIEF AUDIENCE AND THE SMALL GESTURES OF POPE FRANCIS SPEAK VOLUMES IN GENERALITIES BUT NOT SPECIFICS! 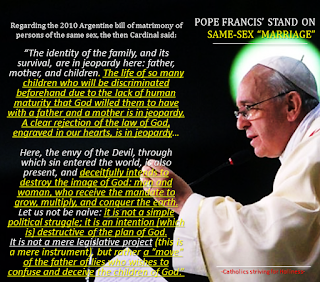 Before reading the terse statement from Father Lombardi below, keep in mind that Pope Francis said exactly the following on the way back to Rome to a reporter who had asked His Holiness about religious liberty and conscientious objection:

Terry Moran, ABC News: (Clearly the question is about Kim Davis, although her name isn't used)
Holy Father, thank you, thank you very much and thank you to the Vatican staff as well. Holy Father, you visited the Little Sisters of the Poor and we were told that you wanted to show your support for them and their case in the courts. And, Holy Father, do you also support those individuals, including government officials, who say they cannot in good conscience, their own personal conscience, abide by some laws or discharge their duties as government officials, for example in issuing marriage licenses to same sex couples. Do you support those kinds of claims of religious liberty?

Terry Moran, ABC News:
Would that include government officials as well? 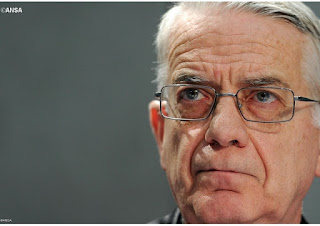 (Vatican Radio) Father Federico Lombardi, SJ, the head of the Holy See Press Office has released a statement on the brief meeting between Kim Davis and Pope Francis during his visit to Washington, DC.
The full statement is below

The brief meeting between Mrs. Kim Davis and Pope Francis at the Apostolic Nunciature in Washington, DC has continued to provoke comments and discussion. In order to contribute to an objective understanding of what transpired I am able to clarify the following points:
Pope Francis met with several dozen persons who had been invited by the Nunciature to greet him as he prepared to leave Washington for New York City. Such brief greetings occur on all papal visits and are due to the Pope’s characteristic kindness and availability. The only real audience granted by the Pope at the Nunciature was with one of his former students and his family.
The Pope did not enter into the details of the situation of Mrs. Davis and his meeting with her should not be considered a form of support of her position in all of its particular and complex aspects.

Well this is interesting.

So the balanced way to interpret these things on a score card is that merely being given a pride of place visit with the Pope and having him say something nice in your direction doesn't necessarily mean he endorses everything you stand for.

OK, I guess that makes sense.

But notice how this is a one-way street (as usual). When the gays want something, having one of their representatives get close to the Pope and get a blessing means that he's going to bless all their ideological goals and ambitions and if we disagree we're "against the pope and the new direction of the Church".

But when the opposite side gets equal treatment.... it means nothing at all?

This is all about theatrics and shifting sands of public opinion - the Overton Window effect, whereby groups are trying to adopt culturally significant icons of moral authority to their side if only by association.

Thus when a SEAL comes out as gay or transgender we're supposed to know more about his having been a SEAL than anything else. The implication being that somehow we thought gays or trannies aren't men. Of course they're men! That was never in question. That a "manly man" can become thrall to his lust has never been in question. Or that someone is gay but also a rocket scientist, a world-famous mathematician or the CEO of Apple....somehow suggesting that "see, we're not ignorant yahoos" (again, as though anyone argued that they were).

LOW INFORMATION people need these totems and team affiliations, proxies and "grace by association" to FEEL their way to a conclusion about any given moral issue. That's how it's done. It's the band wagon effect ("only cool people are secular atheists, only squares are religious Catholics").

Ask yourself: "self" what do I know about the Free Syrian Army? Probably only a few isolated details. Nothing about the actual fighters. No profiles of courage, no profiles of heroism. No "cool" factor. But we all have the basic gist that ISIS dudes are hard-core, snake-eating, fire-breathing super-men in black PJs who are not to be trifled with. Are they? Does it take a super-soldier to slaughter unarmed civilians or merely a sociopath? Nevertheless based on their PR game, people have begun to associate ISIS dudes with "hard core" and FSA forces as faceless minions.

In the domestic culture war we see only gushingly positive photos of gay couples...and only awful, unflattering photos of Kim Davis. The feelings of gay couples are of maximum importance... while Kim's feelings matter not a whit. Victims of gay aggression including murder - buried on the obituary column. But let someone harm a gay person and it's nightly news. It's all about massaging the public debate and in war, all is fair which is why we see this constant one-sided media spin game.

Culture is based on one's 'cult' - what one worships. So if you worship your own libido, that will become the gravitational center of life towards which all must be directed and all must bow. If you believe in Christ, then you'll judge all in light of and in reference to Christ.

Such a sad state of affairs. Such a terrible treatment of this woman.

"This woman" has made her own bed.

Vox, while Fr. Lombardi's terse statement: "The Pope did not enter into the details of the situation of Mrs. Davis and his meeting with her should not be considered a form of support of her position in all of its particular and complex aspects." is quite sadly open to spinning and spinning, it is true.

What Pope Francis endorses is conscientious objection for even government employees in cases like Kim's and he's asking that laws allow for this sort of thing. However, that could mean, if you want to get specific, which the pope doesn't want to do, that she could be reassigned to another kind of desk job that doesn't entail offending her religious rights. The same is true in the military. If one is a conscientious objector to war, especially during the draft, one could still be drafted but assigned to a non-combatant desk job. But should bishops and popes get specific about what that job is? No!

The most important words of the Holy Father to Terry Moran which is really all about Kim Davis' choice is the following quote:

"It always moved me when I read, and I read it many times, when I read the “Chanson de Roland” when the people were all in line and before them was the baptismal font and they had to choose between the baptismal font or the sword. They had to choose. They weren’t permitted conscientious objection. It is a right and if we want to make peace we have to respect all rights."

Kim had no choice in her position and conscientious objection, she either followed what the government told her or she went to jail. The baptismal font (her conversion to Christ and his teachings on marriage) was not a choice for her--the pope laments this.

Much ado about nothing.

As some wiseguy noted, the Pope also met with Mark Wahlberg, but that doesn't mean he liked "Ted."

I'm not blaming the Pope, Father. I am disgusted that the spin machine is walking this back. They did not walk back when the Holy Father met with a "transgendered" person. Why in this case? I think the whole Church is being manipulated by evil men inside and out who hate Her and thus, hate Our Lord Jesus Christ.

Someone invited this woman to meet the Pope. She didn't knock on the door of the Nunciature.

Her treatment by Tweeting priests, we know who they are, is tragic.

Fr. McDonald, can you please define what a conscientious objector is in more detail so myself and others might have a better understanding?

Somehow, so it seems, these "clarifications" make things worse than the original.