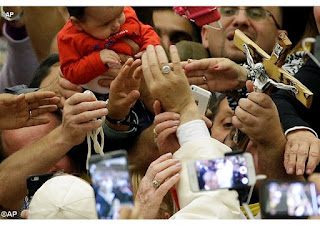 (MY COMMENT FIRST: If you have traveled to Rome and other European cities, you know that you have to watch the gypsies as they will steal you blind and you would not even realize it. Tourists are warned to be on guard. Several years ago on a Roman bus I had about 100 Euro's stolen out of the front pocket of my jeans that I was wearing at the time on a bus crowded with gypsy men and I never even felt someone reach into my pocket to get it!!! I only realized it once they left the bus and I placed my hand into my pocket only to find it empty! In other words, the above Vatican photo of the pope with the gypsies is something an ordinary tourist should not attempt especially while wearing a ring!)

(Vatican Radio) Pope Francis has called on Gypsies to “turn the page” and give life to a new chapter in the history of the traditionally nomadic people.

“Time has come, he said, to uproot secular prejudice, preconceived ideas and the reciprocal diffidence that are often at the base of discrimination, racism and xenophobia” he said.
“No one must feel isolated” the Pope continued, and “no one is entitled to trample on the dignity and the rights of others”.

Pope Francis was speaking to some 7000 Gypsies gathered in the Paul VI Hall in the Vatican for an audience marking the 50th anniversary of the Blessed Paul VI’s historic meeting with Roma people in a gypsy camp near Rome.


And highlighting the fact that every person has the right to a dignified life and a dignified job with access to education and health care, he told  those present that they have the responsibility of building bridges with the rest of society in the name of a “peaceful co-habitation” in which different cultures and traditions can safeguard their values with an attitude of openness, with dialogue and integration.
“We do not want to have to witness any more family tragedies in which children die from cold or are burnt in fires” he said.

Nor – he continued - do we want to see children who are used like objects by depraved persons, or young people and women implicated in the trafficking of drugs or people.

Pope Francis exhorted the Roma, Sinti and other itinerant peoples to become protagonists of fraternity and sharing in our cities in which there is so much individualism.

“You can do this if you are good Christians, avoiding all that is not worthy of this name: lies, frauds, swindles, altercations” he said.

And the Pope held up the example of the Blessed Zeffirino Giménez Malla as a model of life and religiosity.

And urging those present to avoid giving the media and public opinion occasions to speak badly of Gypsies, he told them to be protagonists of their present and of their future.

And speaking of future Pope Francis said “children are your most precious treasure” and he pointed out that education is at the base of the healthy development of the person.

It is known, he said, that an insufficient level of education of many young Gypsy people represents the main obstacle in entering the world of work.

“Your children have the right to go to school, do not stop them from doing so!” he said.

And noting that it is the responsibility of adults to make sure their children obtain an education that will enable them to become citizens who can fully participate in the social, political and economic life of the country, Pope Francis also asked civil institutions to guarantee adequate formation courses for young Gypsies, giving those families most in need the possibility of being integrated in educational and labour programmes.
Posted by Fr. Allan J. McDonald at Tuesday, October 27, 2015

What...he wants the gypsies to quit stealing? Yeah, like when the Irish quit drinking...

I was on the bus in Rome and reached into my front pocket and found another man's hand there! No, it's not what you're thinking--I kept my wallet there because I knew that if I put it in my back pocket in Rome I might as well just throw it into the Tiber.
Can't say he was gypsy--looked like an ordinary Italian to me.

When he chooses to be clear, he's quite so, but it makes one wonder....