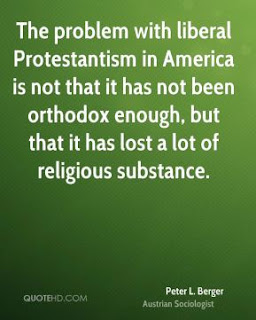 It is interesting reading what a liberal Protestant minister has to say about his liberal Protestantism. Of course he's comparing apples to oranges and seems to half-heartedly admit liberalism has led to its decline because faithful Christians go somewhere else, to more orthodox denominations.

The Catholic loss isn't based upon people leaving for more orthodox denominations, their have loss their faith and have become nones for the most part. I don't think they are joining liberal Protestant denominations in great numbers.

But here is a Protestant take on Catholic fears:

The Collapse of Liberal Protestant Churches

Last week, 13 conservative cardinals delivered a letter to Pope Francis, complaining about some of the ways that his synod on the family is being run. They concluded the letter by saying, "The collapse of liberal Protestant churches in the modern era, accelerated by their abandonment of key elements of Christian belief and practice in the name of pastoral adaptation, warrants great caution in our own synodal discussions."

Conservative Catholics have a right to their opinions, but many of us in liberal Protestant churches would dispute their contention that we have abandoned key elements of Christian belief and practice. In fact, we have made changes in our churches because of our Christian beliefs, not in the name of "pastoral adaptation."

A generation ago, we began to ordain women because we read the Bible and saw the ways in which Jesus honored women. Female pastors have God-given gifts for ministry, and women are now leading some of our largest churches, just as they now lead corporations, hospitals, and military units. In 2014, the Rev. Shannon Johnson Kershner became the first woman solo senior pastor at Fourth Presbyterian Church in Chicago, followed by the election of the Rev. Amy Butler as senior pastor of Riverside Church in New York City, and the arrival of the Rev. Ginger Gaines-Cirelli as senior pastor of Foundry United Methodist Church in Washington, D.C.

More recently, many of our churches began to allow same-sex marriage because we studied the Bible and realized that the covenant of marriage is a promise-based relationship that has changed repeatedly over the centuries while always being grounded in love and faithfulness. Same-gender couples are joining our churches because they want the same Christian formation that has always been available to heterosexual couples. According to Matthew Vines, the author of God and the Gay Christian, a May 2015 Pew Research Center poll reveals that 48 percent of lesbian, gay and bisexual Americans identify as Christian -- a six percent increase from two years ago.

It is true that liberal Protestant churches have lost members over the past generation, mainly through low birth rates, failure to plant new churches in growing areas, and a nationwide decline in religious affiliation. But so has the Roman Catholic church. The fact is that many Roman Catholic laypeople disagree with the church hierarchy about birth control and gay rights, leaving the church badly fractured on key moral issues.

There is room in the Christian Church for conservatives and liberals, and I am glad to be part of a Presbyterian denomination that finds its vitality in democratic decision-making and alignment between clergy and laypeople on most important issues. While we members of liberal Protestant denominations have many challenges today, we can join Mark Twain in saying, "The reports of my death have been greatly exaggerated."

As for the 13 cardinals who wrote the Pope... they can criticize his synod on the family if they want, but people who live in glass cathedrals shouldn't throw stones.
Posted by Fr. Allan J. McDonald at Tuesday, October 20, 2015

I simply do not understand liberal Protestantism. For whatever reason, I just don't get it -- there is nothing about it that is appealing to me, and it even fails to generate the slightest bit of intellectual curiosity within me.

In my life, I have been curious about and studied Mahayana (and Tibetan) and Theravada Buddhism, Islam, Hinduism, Scientism, Scientology, agnosticism, atheism, Catholicism, and Orthodox Christianity. I have never had the slightest inkling of interest in reading anything about Protestantism, liberal or otherwise.

Look, please do not trot this neo-prot, pseudo-Christian nonsense before me and others with protestant theological educations who were there when the likes of Peter Berger were destroying the faith of students everywhere and morons like this so-called pastor were selling the Faith down the river. I WAS THERE (attended lectures by Peter Berger) in grad school and seminary in the 70's. I know these people. They look and sound just like the crowd at the current synod. They are snakes and wolves, all of them...to be shunned, rejected, ignored, condemned. Christ have mercy!

The problem here has a parallel in the secular life of our nation:

Liberal socialist democracies in Europe are bogged down with crippling high taxes, regulatory laundry lists that discourage business and production, sending manufacturing to the third world and creating an anti-family atmosphere that leaves Europe ripe for imploding, as the replacement rate needed to provide a tax base to take care of the elderly is not being reached by families who contracept and abort.

Likewise, liberal Protestantism's de-centralized non-authority structure has created a plethora of "churches" that continue to fragment and educate a populace of "Christians" who are attempting to redefine what Christianity means and, in many cases, have no idea what they believe or, for that matter, what they SHOULD believe.

I am not saying that political conservatism or traditionalist Catholicism is flawless or even a panacea for the problems that face our secular lives and the Church, but they did not bleed the way the liberal agenda does. The rot and deterioration cannot be stopped by becoming more liberal and more fragmented.

But wait! Just like our secular world has entrenched politicians who insist that this "new way" is going to cure all of our social ills if only we try it more and give it a more all-encompassing control over our lives, we also have a very aged and very entrenched group of Church leaders who, without calling it "Protestant", insist that we follow the proven failure of the Protestant churches.

It takes real courage to look at a failed system and admit it isn't working. So far, a number of leaders in our Church refuse to admit this failure. We have been using a failed system since the end of Vatican II. Will a preconciliar-type Church solve all of our problems? Probably not, but it would certainly be a step in a more fruitful direction.

Nothing is going to change until we stop trying to canonize Vatican II and admit its failings and the failings of the creators of rupture who delivered us this mess. The emperor STILL has no clothes. When will we have the courage to admit it?

Keyser, OOOOOH, they like the emperor with no clothes...ewww...it is just soon exciting.....yum,yum.

The spell check on this blog sucks. My post above should have read SO exciting. But, you get the drift.

No, liberal protestants and Catholics do not believe in God....but they lie about it to further their purpose. After all, if there is no God, what's a lie?

The Reverend Ginger? I wondered what happened to the Spice Girls.

Modern Protestantism has become a manifestation of secular humanist's most outrageous caricature of Christian spirituality.