YES! YES! YES! THE LAITY MAY AND SHOULD JOIN THE PRIEST IN THE EXTRAORDINARY FORM OF THE MASS IN SAYING OR SINGING THE ENTIRE PATER NOSTER! SO EF CONGREGATIONS, GET WITH THE PROGRAM! 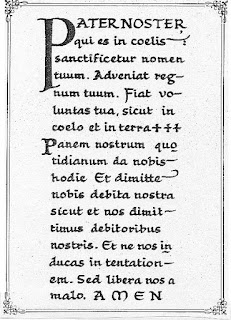 BOMBSHELL STUFF BELOW AND FROM 1997 ECCLESIA DEI! THINGS I DID NOT KNOW ONLY NOW COMING TO LIGHT--FLOWER DE LUCCA SENT THIS:

the-latinmass.com
Regarding the "Pater Noster" AND OTHER BOMBSHELL THINGS CONCERNING THE EF MASS AND ISSUED IN 1997!!!!

“32. Since the Pater Noster is a fitting, and ancient prayer of preparation for Communion, the entire congregation may recite this prayer in unison with the priest in low Masses; the Amen at the end is to be said by all. This is to be done only in Latin, never in the vernacular.”

2.a) This Pontifical Commission sees no difficulty in the celebrant and ministers joining in the singing of the plainchant Gloria and Credo together with the schola cantorum and the congregation instead of reading them privately as directed by the Ritus Servandus. This usage was already admitted by the Church a relatively short time after the publication of the 1962 Roman Missal. The same holds true, mutatis mutandis for the Missa Cantata.

b) This Pontifical Commission sees no difficulty in the entire congregation's singing of the Pater Noster in all sung Masses.

In addition to above ruling of the Pontifical Commission of 26 March 1997, the following directives were also issued:

1. If the celebration of the Divine Office precedes Mass, the Prayers at the Foot of the altar may be omitted.

2. The rites accompanying the readings from scripture may be celebrated at the sedilia.

3. The readings may be proclaimed facing the people, whether in Latin or the vernacular and the celebrant is not required to read them or the Gradual chants separately.

4. Bidding Prayers may be offered after the Oremus, immediately preceding the Offertory.

5. The "Secret" prayer may be sung aloud.

6. The celebrant may sing the entire doxology Per ipsum, whilst elevating the Host over the chalice.

7. The Pater noster may be sung by all with the celebrant.

8. The final Blessing may be sung, and afterwards the Last Gospel may be omitted.

If you did these things at the Mass, you would probably be the only priest in the country doing them... If I were you, I might want to know what a priest actually formed in the traditional Mass thought about these things. In fact, if I were you, I would probably take the time to learn the traditional Mass from a traditional priest instead of trying to make it up as you go along. You have a couple traditional priests just an hour and a half away -- I'm sure either of them would be more than willing to come train you.

My question is how many priests and congregations know about these permissions, especially the 1998 Ecclesia Dei permissions????

Odd that the "Secret" would be said aloud. Maybe it should be re-named "Open Secret."

I seem to remember this Father and it was originally on New Liturgical Movement. I have a link here and a photo of the letter.

It is partly what you refer to. However, my understanding is that these kinds of letters were not universal but dedicated specifically to the monastery or house to which it was sent. I think there was one like this to the Toronto Oratory. The people were outraged when they tried it.

The date of my column was in May 2007, prior to Summorum Pontificum. Since we've not heard anything since then, I would not consider undertaking these rubrical changes.

However, if you research the actual 1958 document Da Musica Sacra et Sacra Liturgia and the actual rubrics, there are degrees of what the people can do in a Read Mass including the Pater Noster. http://maternalheart.org/library/1962rubrics.pdf

Over the years, several commentators here, including me, have referred readers of your blog to the 1958 instruction and the permissions to which you now refer.

As for the 1997 permissions, it should be noted that Summorum Pontificum and subsequent legislation seems to supplant them.

Summorum pontificum specifically revokes Quattuor abhinc annos (1984) and the motu proprio Ecclesia dei of 1988, but makes no mention of the 1997 document.

The motu proprio that accompanied Summorum pontificum doesn't mention the Ecclesia dei 1997 document either. Does that mean it's still in force?
http://w2.vatican.va/content/benedict-xvi/en/letters/2007/documents/hf_ben-xvi_let_20070707_lettera-vescovi.html

The laity may join in the Our Father.

As if we needed such permission.

A lot of the "allowances" mentioned here, Father, are the same allowances that were allowed in 1964's "Inter Oecumenici" as a way of getting the ball rolling on the Novus Ordo. So whether or not they're still permitted for the EF now, it does lead me to ask, wouldn't the integrity of the older missal *as the older missal* be compromised if these allowances were used? This may be reading too far into it, but it sounds to me like you'd then have the OF and the 1964/1965 interim Mass, not the OF and EF, if you put these changes in motion at your church.

I think it was generally understood that permission to use the Old Rite included permission to use the 1965 alterations (which is basically what you have listed here). The earliest indult (the Heenan or 'Agatha Christie' indult of 1971) took the form of a peevish and grudging letter from Annibale Bugnini insisting that the 1967 form be used (see Tres Abhinc Annos) which would have defeated the object since 1967 had more in common with the Novus Ordo than it did with the Roman Rite. Fortunately Heenan already had permission to use the 1962 books and so indult Masses in England and Wales were according to this rite.

Summorum Pontificum and Universae Ecclesiae nullified earlier rulings and so the Missal of 1962 is the normative form of the Roman Rite, and although future revisions are not ruled out, past revisions are. This is necessary to ensure a period of stability, although a return to the pre-1955 Ordo for Holy Week is desirable and in the long run inevitable. Restoring the timings was one thing; mutilating the rites themselves was quite another. This was Bugnini's handiwork and although Pius XII signed it off the changes were deplored by (inter alia) Cardinal Heenan and Pope John XXIII.

De Musica Sacra (1958) does allow the congregation to recite the Pater Noster along with the priest at Low Mass, and if competent, even the Propers which in a High Mass would be sung by the schola - I don't think the E&W bishops ever got round to authorizing the practice. Did it happen in the US?

Father, if I were you I would stick to the Ordinary Form of the Mass said in Latin and said ad orientam. It seems to me that is what you prefer.

From what I have read what John Nolan says appears to be correct: "Summorum Pontificum and Universae Ecclesiae nullified earlier rulings and so the Missal of 1962 is the normative form of the Roman Rite, and although future revisions are not ruled out, past revisions are"

The Latin Mass Society also says on their site that only the priest chants the Pater Noster and that the Choir/congregation chant "sed libera nos a malo".

Fr Z's comments appear also to bear this out. He states on his blog:

"First, I must say that I was wrong the other day … or at least I may have been right then, but I might be wrong now… in saying that people could sing the Pater Noster with the celebrant during a missa cantata. It seems… seems… that Pontifical Commission Ecclesia Dei is saying that only the priest sings the Pater Noster." He was sent the followingn from a reader:

"The Cure has forwarded the Ecclesia Dei response with immediate application next Sunday in Saint -Eugène : the Our Father is sung only by the celebrant, the faithful resume sed libera nos a malo, and confiteor before communion is deleted."

"A good number of changes incorporated into the 1965 Missal diminish the unique role of the celebrant, particularly in sung Masses. ... The Pater Noster may be sung or said together with the celebrant in Latin or the vernacular, once again diminishing his distinctive role.

... In view of suggestions from certain quarters that the Missal of 1965 and its multiple amendments should be used by celebrants of the traditional Mass of the Roman rite as set out in the Typical Edition of 1962, this 14th General Assembly of the International Una Voce Federation requests respectfully that the norms of the motu proprio Ecclesia Dei adflicta be adhered to without change. The introduction of the changes found in the 1965 edition would constitute an “interchanging of texts and rites” specifically forbidden by Quattuor abhinc annos, October 3, 1984."

TOTALLY off subject here but just found out:
In a comment I made Sept. 14th to a post by Fr. MacD on Sept 13th ("OKAY, THIS IS A CHILDREN'S MASS...") I asked for prayer support for our 33y.o. son who had become a "none". George and Carol H responded promising prayer for him. Please, Father, let them know even if you don't post this comment: HE WENT TO MASS THIS PAST SUNDAY, TBTG! we live 3000 miles apart, so communication is tough at best. George and Carol H, we can never thank you enough, but we promise prayers for your needs always...may God bless you and keep you always!! And Fr., if you offered a prayer (which I'm sure you must do for your commenters unbeknownst at times), we can't thank you enough. We have been praying for years for this special intention and all seemed so hopeless for him. But our God never gives up on us....may He continue to work His miracles in all our lives.

In terms of the adaptions ED allowed in 1997, while these are similar to the 1965 Roman Missal, they are not in another way. The 1965 Missal had some other changes for some liturgies such as the PATFOTA (shortened) and some other modifications and it allows for English. The only changes to the 1962 Missal in the directives above have to do with the Secret being allowed, which makes sense, and the readings in the vernacular facing the people, which makes sense, without the priest duplicating them if someone else is doing these.

Father, that is good to know that you like both forms of the Mass but it must be disconcerting for your parishioners who attend the EF of the Mass to read comments that you would like this change and that change. If and when there are any changes to the 1962 missal we will hear from Ecclesia Dei. In the meantime, the rubrics of the 1962 missal pertain - and that is why no one else is making such changes - except for those not realising that Summorum Pontificum superseded the changes mentioned by Flower of Lucca. As the Latin Mass Society for England and Wales states:

"Recently, there has been much publicity given to a letter that was issued by the PCED in 1997 and signed by the then President, Cardinal Felici, and by Mgr Perl, the Secretary. This letter permits a number of modifications to celebrations of the Missal of 1962 concerning the Epistle, Gospel, Gloria, Credo, Pater Noster, and Prefaces from the appendix of the 1965 Missale Romanum and from that of 1970. They, therefore, are superseded by the provisions of ‘Summorum Pontificum’. For if the Supreme Pontiff wished prior liturgical provisions to be observed, he would have stated as much in his Motu Proprio of 7 July 2007."